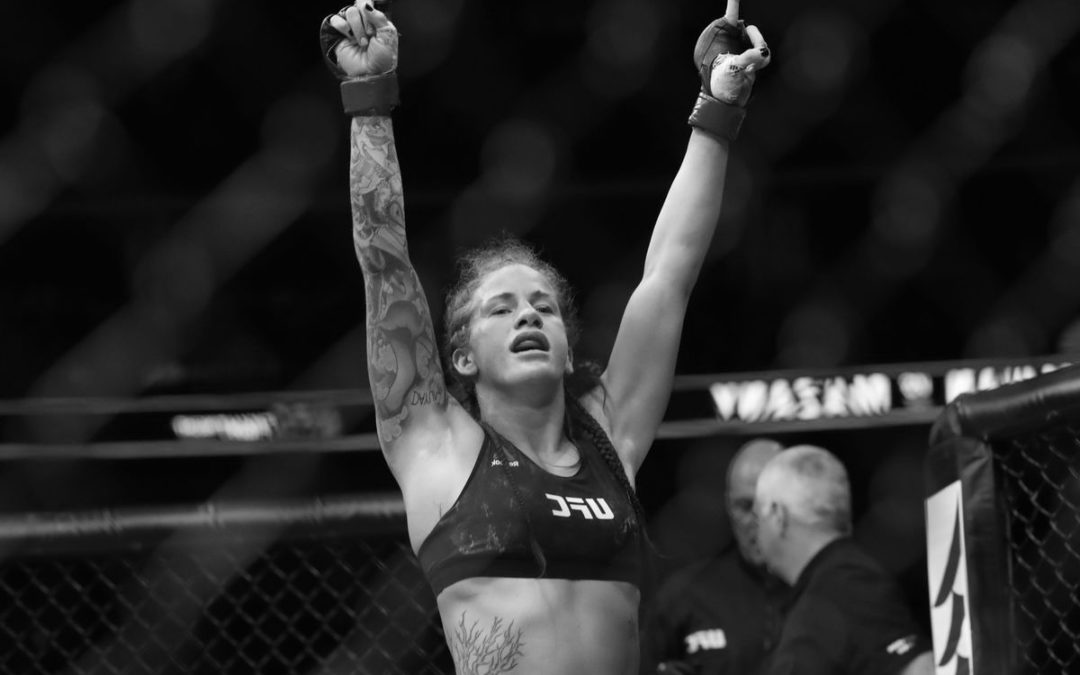 After a diabolical performance by Zak Cummings last weekend, I’m looking to get back on track as the UFC heads to Liverpool, UK, for the first time. Here are my breakdowns for the fights that I think are worth betting on.

At first glance, this looks like the kind of women’s MMA fight that you would only bet on if you’re a total degenerate. Fortunately, that’s me down to a tee.

I believe the striking exchanges in this matchup are going to look very ugly. Envision Frankenstein’s monster taking on The Mummy. Both fighters live by the adage: “The best defense is a good offense”.

Muay thai stylist, Lina Lansberg, appears to be the superior striker on paper, but after looking at the footage available – I don’t think there is a great discrepancy. Lansberg is the more active clinch striker, but I don’t think Mazany will be out of her depth if they tie up.

Fighting out of Xtreme Couture, a renowned wrestling gym, I expect Mazany to indulge in striking exchanges for a while but ultimately aim to take the fight to the mat. Although she struggled to hold down her previous opponent, Yanan Wu, she managed to land plenty of ground strikes and was fighting with a broken foot. In her regional footage, it’s clear that Mazany underhands how to fight from top position.

As shown in her last fight, Lansberg does not perform well off her back. Her counter-wrestling is also not great and she’s been taken down by far lesser grapplers than Mazany. I think Mazany has a clear path to victory with her wrestling.

It’s worth noting that Mazany is in her athletic prime at 29, while Lansberg is 36 and has taken an enormous amount of damage in her last 3 fights.

I believe there is value on Mazany as a slight underdog when she should be the favorite. Gina Mazany is the play at +130.

An All-American Division I wrestler from Iowa State, Trevor Smith is the epitome of a grinder. Despite his extensive accolades, Smith has only been able to impose his suffocating gameplan on opponents that are not capable grapplers.Smith scores wins over fighters like Chris Camozzi, who flops to his back like a fish the second anyone ties up with him, and Tor Troeng, who unwisely initiated the grappling exchanges with Smith and got himself reversed several times.

Smith looks labored when he throws strikes, leaves himself wide open defensively and has been knocked out on numerous occasions.His opponent this weekend, Elias Theodorou, is one of my favorite fighters. Not because he’s enjoyable to watch, but because he performs consistently. Fighting out of gym famous for risk aversion, Theodorou uses elusive footwork and an outside kicking game to outpoint his opponents.

While not as decorated as his opponent, Theodorou is a competent wrestler and will assumedly use his wrestling defensively if Smith is capable of closing the distance and tying up – which I don’t think he will be.

A slow, plodding wrestler is not the type of opponent who is going to defeat Theodorou. Given the defensive lapses of Trevor Smith, don’t be surprised if the Canadian point fighter scores a rare TKO victory. Even at -400, I think it’s safe to put Theodorou in a parlay.

Jiu-jitsu specialist, Claudio Silva, returns after a long injury layoff to take on a seasoned competitor in Nordine Taleb.

In Silva’s previous UFC fights, he used his grappling edge to win decision victories against the tough but limited Brad Scott and a very green Leon Edwards. In those fights, he showed that his striking is very raw and his cardio is not sufficient for 3 hard rounds. Coming off a long layoff at 35 years of age, I’m not confident those two deficiencies will have been addressed.

In his last two fights, Claudio Silva showed he has an okay single leg takedown, but Leon Edwards was not a competent wrestler at that time and Brad Scott still isn’t. If he’s unable to drag Taleb to the mat, he’s going to get dismantled by the superior kickboxer.

Although late in his career as well, Taleb seems to be a gifted athlete. With plenty of training partners at Tri-Star to help him prepare for the grappling attack of Silva, I see him successfully defending takedowns and humiliating Silva in the standup.

Silva has a path to victory, but it’s an unlikely one. Nordine Taleb is the play at -300.

Darren Stewart is not the most refined striker. He likes to charge forward and throw wild haymakers. He packs a punch, so if he does catch Eric Spicely with a bomb, he can certainly end the fight.

Like many power punchers, if Stewart is unable to secure an early knockout, his chances of securing a victory diminish rapidly. He’s also a liability on the mat, which does not bode well against a jiu-jitsu black belt like Spicely.

Unlike the aforementioned Claudio Silva, Spicely is a complete MMA Grappler. With a solid wrestling base, Spicely knows how to setup his takedowns in order to get his jiu-jitsu going. Given that he’s lightyears ahead of his opponent on the mat, Spicely won’t care if he winds up on bottom position – which gives him more options for getting the fight to the ground.

In order to keep the fight standing against Spicely, I’d like to see Stewart fight technically, avoid overextending on his shots and be prepared to sprawl in an instant. I think there is a 0% chance he does this.

If Spicely doesn’t take a nap early, he’s going to snatch a neck or an arm. Fight doesn’t go to decision is the play at -215. I’m also intrigued to see what line we get for Spicely by submission.

No one in the UFC looks more like a professional accountant than Dan Kelly. With greying hair and a physique that any middle-aged corporate employee would be proud of, it’s easy to see why people treat Kelly as a novelty act.

The fact remains that if Kelly was 10 years younger and had a physique like Paulo Costa, fans would never question his legitimacy as a UFC-level fighter. He’s a little slow and limited at range, but he pushes an insane pace, has underrated dirty boxing and can count on his judo base in grappling exchanges.

If you don’t pack the concussive power of Sam Alvey or Derek Brunson to put Kelly away early, then prepare for a dog fight. To quote John Gooden: “Daniel Kelly does not have reverse in his gearbox”. Elias Theodorou, who is a cardio king, never looked more exhausted than he did after going 3 hard rounds with Kelly.

There’s no question that Breese is the more technically gifted fighter here. A dangerous southpaw with an accurate left hand and thudding body kicks, Breese is a tough opponent for anyone in the middleweight division.

However, Breese is coming off a long layoff due to an ACL injury. We’ve also seen Breese’s output slow down in later rounds, which could be disastrous against a non-stop pressure fighter like Kelly.

Breese might be the right side at -150, but he’s not playable at -300. Don’t be surprised if the aging workhorse secures another victory in his beloved role as underdog. Take a small shot on Dan Kelly at +255.

When he’s not taking selfies like Derek Zoolander on Instagram, Makwan Amirkhani can be found honing his skills at his new home, SBR Ireland. With a strong Greco-Roman wrestling base, Amirkhani has been able to dominate the majority of his opponents thus far. However, unless he evolves the other aspects of his game, he’s not going to be able to hang with the competition in the world’s toughest MMA organization.

To his credit, Amirkhani has admitted that his striking wasn’t up to scratch. During his year layoff, he’s spent months exclusively working on his boxing. This is intriguing, because his opponent leaves a lot of openings on the feet. A technical boxer with strong counter-wrestling is exactly the type of fighter I’d pick to beat Jason Knight.

However, unless Amirkhani has made meteoric improvements, Knight is still likely to be the dominant striker on Saturday night.

While Amirkhani is the superior wrestler, I don’t think he’s the superior scrambler. Knight has a great offensive guard and an instinct for taking the backs of his opponents. Don’t be surprised if Amirkhani initiates the grappling exchanges and subsequently finds himself caught in a rear naked choke.

Amirkhani’s cardio has failed him in the past, while Knight is renowned for his tenacity. Sure, Knight looked flat in his last fight, but he was battling strep throat – which explains the underwhelming performance.

I think Jason Knight’s opening like was accurate at -230. Knight has more than enough advantages to warrant a play at -150.

Darren Till vs. Stephen Thompson

This fight is exciting, but from a gambling perspective it’s hard to get a read on.

While labelled as a muay thai striker, Darren Till is not your average stand and bang brawler. Till has an exceptional understanding of distance and fires his left hand with the accuracy of a homing missile.

Against one of the most elusive and unorthodox strikers in MMA, it remains to be seen whether Till can close the distance and land his clean 1-2 combination as he’s done against lower level competition in the past.

Thompson is undoubtedly a puzzle. His front leg side kicks, elusive footwork and unpredictable blitzes have given his previous opponents fits. Thompson made great strikers like Rory Macdonald and Jorge Masvidal look average.

Thompson is proven against elite competition, while Till is yet to face a real challenge. Till’s win over Cerrone was impressive, but Cerrone is somewhat shopworn and all of his defeats have come against high level strikers.

There are a lot of question marks surrounding this fight and I’m struggling to envision how things will play out. One certainty is that Till cuts an enormous amount of weight and his output diminishes late in fights. What is Till going to look like when the fight hits the championship rounds? We’ve seen that Thompson has good cardio.

If Thompson can avoid getting annihilated in the first two rounds, I think he has a great chance to win a decision or score a late finish himself. If it wasn’t for the recent line movement, I’d recommend passing on this fight, but as it is, Stephen Thompson is playable at -110.