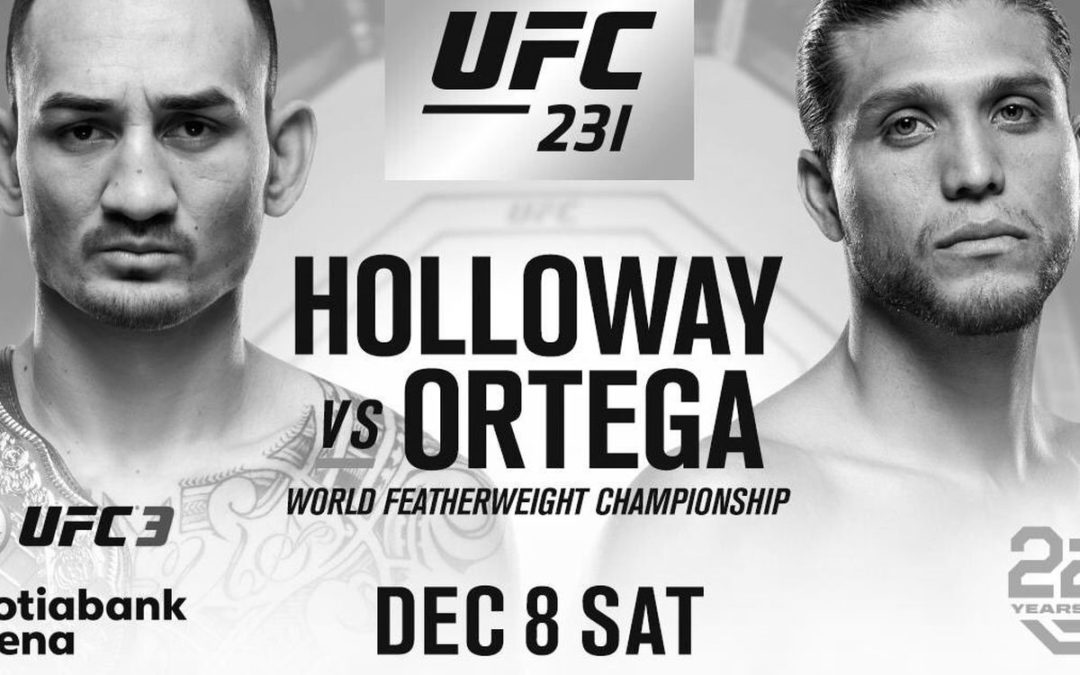 From a fan’s perspective, UFC 231 is a fantastic event. In terms of betting opportunities, I’m feeling lukewarm. Nevertheless, here are my breakdowns of the fights that I’m looking to play.

With his newfound striking skills, Burns scored emphatic knockout victories over Jason Saggo and Dan Moret. Unfortunately, opting to bang with Dan Hooker proved to be disastrous and Burns was violently finished in his last fight. I lost money thinking Burns would grapple – oh well!

While a solid striker, Burns takes risks defensively and loads up on his shots. Dan Hooker is the type of fighter that can capitalize on defensive lapses – but I’m not sure Olivier Aubin-Mercier is.

Coming from a judo background, Aubin-Mercier is immensely strong in the clinch and heavy from top position. While he’s much more skilled on the feet than he used to be, Aubin-Mercier still lacks the fluidity of someone that is a natural striker. He’s light on his feet, in and out with his movement and somewhat tentative – but is accurate when he fires.

While Aubin-Mercier is a jiu-jitsu brown belt, I doubt he wants to go to the mat with Burns. Even the muscle-bound human blanket, Michel Prazeres, refused to dive into the guard of Gilbert Burns – which speaks volumes.

In his last fight, Aubin-Mercier looked a step behind in the scrambles against Alexander Hernandez and I’d expect a master of body manipulation like Gilbert Burns to dominate on the mat as well (although I wish there was more footage of Burns fighting off his back to make a better assessment).

I think the striking exchanges will be competitive, but I give Burns a slight edge. Stylistically, this seems tricky for Aubin-Mercier and I can’t predict his strategy. Perhaps the Canadian will try and control his opponent against the fence, but without shooting takedowns?

I do believe Aubin-Mercier is the better athlete and certainly has the superior cardio. Still, I’ll take my chances with Gilbert Burns as a +120 underdog as I think he should be a slight favorite.

In a middleweight showdown between two fighters with contrasting styles (and personalities), Eryk Anders takes on Elias Theodorou.

A fantastic athletic, Anders is explosive yet has good cardio. Fighting out of the southpaw stance, Anders packs huge power in his left hand – but in my opinion, goes head hunting a little too much. In his last bout, Thiago Santos was well prepared for the primary weapon of Anders – which limited his offensive success.

Despite his explosive movements, I don’t feel Anders has great footwork. He could have done a better job of cutting off the octagon against Santos. I’m interested to see how he closes the distance, because we know Elias Theodorou will be on his bicycle from the opening bell, looking to pot shot from kicking range.

While I dislike his woman hair and attempts to redefine gender roles, Theodorou is a solid fighter. His distance control is fantastic – pulling opponents into the clinch whenever they enter boxing range or pivoting out so he can continue kicking. He strayed away from this in his last fight, probably because he didn’t respect the striking of Trevor Smith. I guarantee he does not want to hang in boxing range with a hitter like Anders.

This is a tough fight to call, but I’m leaning slightly with Elias Theodorou. I managed to bet him at +162 and now that he’s become a favorite, I’m going to hedge out for a free-roll. Given that an Anders knockout is the only way this ends early (and considering Elias has a good chin), I think fight goes to decision at -245 is a solid parlay leg.

British knockout artist, Jimi Manuwa, was put on this Earth to fight. Could you imagine him working in an open-plan office participating in team building games? He probably should have been born a few thousand years earlier, chopping off heads on the battlefield.

Supremely aggressive, Manuwa deploys a stalking, predatory style. Like many fighters with natural power, Manuwa favors a single shot striking approach and sits down on everything he throws.

I like the precision and shot selection of the British fighter. The finishing sequence against Ovince St. Preux was magnificent, as Manuwa ripped the body consecutively in order to open up the final headshot.

Also predominantly a striker, Thiago Santos is more dynamic than his opponent. Switching stances constantly and firing powerful kicks to the legs, body and head – Santos has been racking up knockout victories.

While a lethal finisher, Santos is better with his kicks than punches. When opponents enter boxing range, Santos swings like a maniac and I believe Manuwa will have the advantage at short/mid range with his precision punches.

Santos is a jiu-jitsu black belt and will presumably have an advantage on the mat – but I’m not sure he can resist going toe to toe with an opponent that loves a fire fight.

Fight doesn’t go to decision is an obvious bet, but I’m not interested in the -550 price tag. These lines feel wide to me and I’m going with Jimi Manuwa to cause an upset at +175.

I don’t rate Alex Oliveira too highly from a technical perspective. He’s a freak athlete with absurd power, but he’s due an emphatic loss against the right level of opponent.

A well-rounded fighter, Oliveira’s striking style is bizarre. Light on his feet, he uses a lot of lateral movement and unpredictable attacks. He puts steam behind everything he throws and more often than not, this proves to be effective. Defensively, the Brazilian leaves himself wide open.

Oliveira has a powerful body lock takedown and can threaten with submissions, but I don’t think it would be wise to go to the mat with Gunnar Nelson. Oliveira’s defensive wrestling is not great and with his wild attacks, Donald Cerrone was able to shoot an easy reactive takedown on him. If you’ve watched Gunnar Nelson’s fight with Albert Tumenov, we know that the Icelandic fighter can duck underneath punches and take the fight to the mat.

In fact, Nelson’s wrestling coach states that Oliveira’s crazy offense will give Nelson good opportunities to get into the clinch (in order to land his own takedowns). I’m informed Nelson has been working meticulously on wrestling over the past few years and although we didn’t see it in his last fight, he’s probably highly proficient by now.

Coming from a traditional martial arts background, Nelson fights with a wide stance and closes the distance quickly. While I have reservations about his defense, I love the Icelandic fighter’s movement and energy efficient strikes. On the mat, Nelson is world class and has a great chance to finish if the fight goes horizontal.

Oliveira’s knockout power is terrifying, and I wouldn’t be overly surprised if he scored another early finish. However, I think Nelson is more technical in every aspect of the game and deserves to be a bigger favorite. I have some action on Gunnar Nelson at -120.

I also like Gunnar Nelson by submission at +300 with Ohmbet (the line is around +135 elsewhere).

Two of the best female strikers in the world lock horns in a flyweight title fight. While they’ve fought in muay thai a long time ago, the footage doesn’t look remotely relevant to what each fighter is capable of today.

Former strawweight champion, Joanna Jedrzejczyk, once looked unbeatable with her impenetrable takedown defense, piercing jab and excellent distance control. A master at keeping opponents at the end of her punches, Jedrzejczyk put on a number of striking clinics.

While she was defeated by Rose Namajunas in consecutive fights, this doesn’t discredit Jedrzejczyk whatsoever. Namajunas became a phenomenal striker in a short space of time – and it could be partially due to her training with Jedrzejczyk’s opponent, Valentina Shevchenko.

A lightning-fast southpaw striker, Shevchenko is lower in volume but precise with her counters. Despite cutting no weight, she has wins over three of the best bantamweights in the world: Julianna Pena, Holly Holm and Amanda Nunes (I don’t care if the judges disagree with me about the last one).

Shevchenko also has a judo background and landed some great clinch takedowns against the much bigger Holm, although I don’t think we’re going to see much grappling in this one.

Jedrzejczyk’s chin is questionable at this stage, but her durability may have improved now that she’s cutting less weight. Neither fighter packs a big punch, so I think we’re probably in for a chess match.

This could be a fight where Jedrzejczyk lands the higher volume and Shevchenko lands the more eye-catching shots – but no one has a clue who has won after five rounds. I favor Shevchenko, but -350 is preposterous.

Personally, I have a futures bet on Shevchenko to become the champion in 2019, but I’m looking to hedge with with the moneyline on Jedrzejczyk as well as the draw in order to guarantee a profit. If I had no action on this fight, I would absolutely take a stab on Jedrzejczyk at +290.

If you’re looking for a parlay piece, I think there is a great chance fight goes to decision cashes at -265.

We’ve never seen an opportunist submission artist like Brian Ortega in the UFC. The Black House MMA fighter usually gives away rounds, but never loses composure. Amazingly, all seven of his UFC victories have come by way of finish.

With the tiniest window of opportunity, Ortega can latch onto a neck or an arm and finish the fight. Still, he’s not much of a wrestler and if he’s forced to contend on the feet – I believe he’s at a disadvantage.

Reigning champion, Max Holloway, is extremely well-rounded but is not going to want to grapple under any circumstances. Fortunately, his takedown defense and balance are excellent so he should be able to remain standing.

Holloway is an extremely high level striker with a granite chin and endless gas tank. He mixes his shots up well and has potent body strikes. As we’ve seen in the past, body shots on Ortega should be there for Holloway.

The biggest concern surrounding Holloway is his health issues. Having to pull out of his previous fight and looking scarily incoherent in interviews, it’s hard to know what is going on with the Hawaiian.

I believe this is why we’re seeing Holloway at -125 instead of -200, because this is a favorable match-up for him. So long as the Holloway we know and love shows up, he should absolutely dominate this fight – although I’m sure there is going to be at least one sketchy moment.

Provided he looks good during fight week, I’m going with Max Holloway to retain his title at -125.