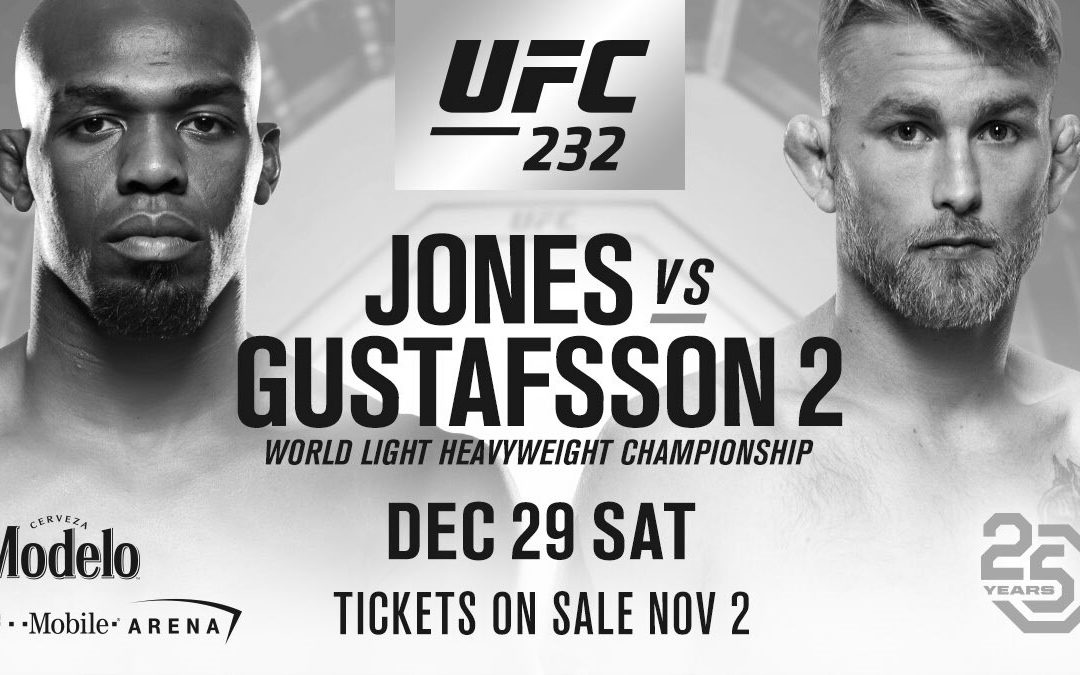 2018 has been a crazy year for me in terms of betting on fights, and here we are with the final UFC event. As always, I’m on the hunt for cash – so check out my predictions for the following UFC 232 fights that I will be laying money on.

Thanks to some superb matchmaking, two savage welterweight strikers throw down in order to see who will climb the ladder in one of the most stacked divisions.

Originally hailing from Afghanistan but now training at the world renowned (and recently troubled) Jackson’s MMA, Siyar Bahadurzada is always down for a firefight. While he’s not the most fundamentally sound striker, his extreme punching power allows him to get away with a lot in terms of technique. He throws a lot of wild hooks but if he connects cleanly, you’re taking a nap.

He will be at a significant height and reach disadvantage here, so it’s interesting to see how he closes the distance. We’ve seen Bahadurzada shoot takedowns from time to time, and judging by the footage I believe he has the superior ground game.

I wasn’t too high on Curtis Millender before the UFC, but he’s looked impressive since joining the world’s biggest promotion – taking out two legitimate competitors in Thiago Alves and Max Griffin.

I can’t imagine what horrors Millender puts himself through to make welterweight, because he’s huge for the division. He’s an excellent striker at range, with a vast array of punches and kick in his arsenal. Additionally, he likes to fire a knee down the middle to deter shorter fighters from closing the distance on him – this was a significant factor in his fight against Max Griffin.

Like many fighters who’re used to being on the right side of the height and reach equation, Millender is defensively vulnerable in the pocket and if he gets cracked with one of those crazy hooks from Bahadurzada – it could be game over. I’m also not sure how good of a wrestler Millender is, but he doesn’t seem to offer much off his back when he does get taken down.

While there are some obvious risks with this bet, I’m going with Curtis Millender at -150. I think the most likely outcome for this contest is Millender dominating the striking exchanges at range while preventing Bahadurzada from closing the distance with that ferocious knee.

I’ll always have fond memories of Douglas Silva De Andrade from when I cashed on him as an underdog against Marlon Vera. A brutal striker, the Brazilian sits down on everything he throws and prefers single shots to combinations. He’s good at being the bully, but I question how good he is at dealing with pressure.

Standing in front of him will be Petr Yan, a phenomenal Russian striker fighting out of Tiger Muay Thai. As a degenerate that likes to gamble on smaller promotions, I’ve watched a lot of Yan’s ACB fights and expected to see him on the big stage for a while. He hasn’t disapppointed, knocking out Teruto Ishihara in round one and dominating a very durable Korean opponent in his next fight.

Coming from a boxing background, Yan’s slips and combinations are beautiful to watch. Stylistically, I think he’ll be able to dodge those telegraphed bombs from Andrade and come back to pop him from weird angles. The takedown could also be there for Yan, although I don’t think he’ll need to wrestle to win.

Make no mistake, Andrade is a good fighter but I think this is a bad match-up for him. Yan is the more sophisticated striker and I have no problem with his -250 price tag.

In a couple of months, Andrei Arlovski will turn 40-years-of-age and he’s racked up a huge amount of damage over the years. This dude’s nose looks like it was drawn by Picasso. Originally coming from a combat sambo background, the current version of Arlovski is more of a head hunting boxer – looking to crash the distance and knock your block off in the pocket.

While we did see Arlovski land takedowns against Stefan Struve (a fighter with notoriously poor counter-wrestling), I’m not sure if he’ll be able to do this against a big, powerful athlete like Walt Harris.

Looking better with every outing, Harris seems to be putting it all together. Even against Mark Godbeer where he was disqualified, he was dominating the striking and would have probably scored another knockout if the fight continued. Coming from a boxing background, Harris is an excellent puncher at range and he’s also incorporated kicks into his arsenal – specifically the left body kick that many southpaw strikers find success with.

Stylistically, I think this is a difficult matchup for Arlovski. Harris, with the amateur boxing pedigree, should be more than prepared for his opponent to crash the distance and try to land a hammer on him. At range, Harris is the vastly superior boxer and he could be the one to score takedowns (he has some devastating strikes from top position).

I thought Arlovski looked flat in his last contest and I don’t know how much is left in the tank for him. I’m going with Walt Harris at -150.

Originally a rugby player weighing 210 pounds, the 5’5 Volkanovski slimmed down a lot in order to fight at featherweight. He’s mixed his strikes and wrestling together well thus far, overwhelming all of his UFC opponents.

One could argue he’s had some favorable match-ups. His defense looked questionable against Darren Elkins and if he gets tagged anywhere near as much in this fight, he’ll be in trouble.

Chad Mendes has huge power in his right hand, is a fantastic athlete and decorated All-American wrestler. Coming back off a drug suspension at 33-years-of-age, some people were ready to write Mendes off, but he scored an emphatic knockout victory over the crafty Myles Jury. Athletically, he didn’t look like he lost a step.

Unless Mendes has fallen off a cliff behind the scenes, I think he should win this fight in devastating fashion – much like his contests with Darren Elkins and Ricardo Lamas.

Volkanovski is going to eat shots in this fight and unlike previously, he won’t be able to rely on his wrestling to get him out of a bad situation. I’m going with Chad Mendes at -150.

Modelling his style on UFC legend, Frankie Edgar, you can see the resemblance when Corey Anderson fights. He can wrestle, he can box, and he blends both arts together beautifully.

While Anderson is a skilled fighter and great athlete, there are two main concerns when betting him:

To Anderson’s credit, he seems aware of these issues. Against a declining but still dangerous Glover Teixeira, I was impressed by Anderson’s performance – especially defensively.

Keeping his hands high at all times and refusing to exchange with the Brazilian, he severely limited the opportunity for his opponent to land one big bomb that could change the fight. He used a lot of wrestling in that contest, but I’m not sure if he’ll be able to do that against the Swedish powerhouse that is Ilir Latifi..

Training out of the famed All Stars gym, Latifi is a human ball of muscle with a solid wrestling background. Conventional wisdom suggests Anderson won’t be able to get him down (although he could still have success grinding on the Swede in the clinch).

On the feet, Latifi isn’t the most nuanced striker but he hits extremely hard. His overhand right is his best punch but he packs power in both hands – dropping Ovince St. Preux consecutively with left hooks. As a short fighter for the division, he’s explosive enough to close the distance and land on bigger opponents.

It feels sketchy betting on Anderson against an opponent with power, but I’m going to do it anyway. I think Anderson is the much more technical boxer and can also dominate in the clinch, so I’ll take the value at +150.

Once a gigantic lightweight, it’s good to see Michael Chiesa move up to welterweight and stop killing himself with those brutal weight cuts. I would expect to see an improved version of “Maverick” in this contest.

I’ve always thought Chiesa looked raw and rigid on the feet, and he’ll certainly be at a disadvantage if the fight stays standing. I anticipate Chiesa will want to catch Condit in his trademark body lock, muscle him to the mat and try and find a submission.

While Chiesa is a legitimate jiu-jitsu threat, I don’t think his top control is superb. In fact, hunting for submissions may give Condit the opportunity to scramble out of bad situations or perhaps threaten with submissions of his own (we’ve seen Chiesa lose by submission on four occasions).

Carlos Condit doesn’t cut much weight – this helps him with his relentless cardio but it may be a contributing factor to his poor takedown defense. Still, we usually see Condit lose on the mat to smothering top control wrestlers rather than pure grapplers like Chiesa.

While I wouldn’t be surprised if Condit gets held down on the mat or submitted, I think there’s a good chance he can get back to his feet and win the striking exchanges. So long as his heart is still in the game, “Natural Born Killer” has a very legitimate chance of winning this. He looked good in the first round of his last contest, before being caught in round two by “Cowboy” Oliveira.

The rematch everyone has been anticipating is finally here. Jon Jones, who has looked virtually flawless throughout his UFC career, met his hardest match against Swedish striker, Alexander Gustafsson in 2013.

While Jones won the fight on the scorecards, it was a battle of inches – the late rally in round four from Jones may have sealed the deal for him. While coming from a wrestling background, Jones is a marvelous striker and maximizes his 84-inch reach. That being said, “Bones” is deadly on the inside too – as he showed against Glover Texiera.

Although not as diverse with his offense, Gustafsson is a very legitimate striker himself. Coming from a boxing background, the Swede does his best work with his hands – putting together fluid combinations.

Although Gustafsson has had some injuries in recent years, I’m not sure how to weigh that against the drug suspensions and unsavory antics of his opponent. I guess the only smart way to look at this is to assume both fighters will be close to 100%, even if that isn’t the case.

Truthfully, I don’t know who will win – although Jones deserves to be the favorite. I think the fight will be competitive, so I can’t blame anyone for taking a shot on Gustafsson at +245. I may do the same if I’m having a good night.

At the moment, the play I like the most is fight goes to decision at -110. Like the first fight, I think we’ll primarily see a technical striking battle for twenty five minutes.