My Process for Tape Studying and Handicapping 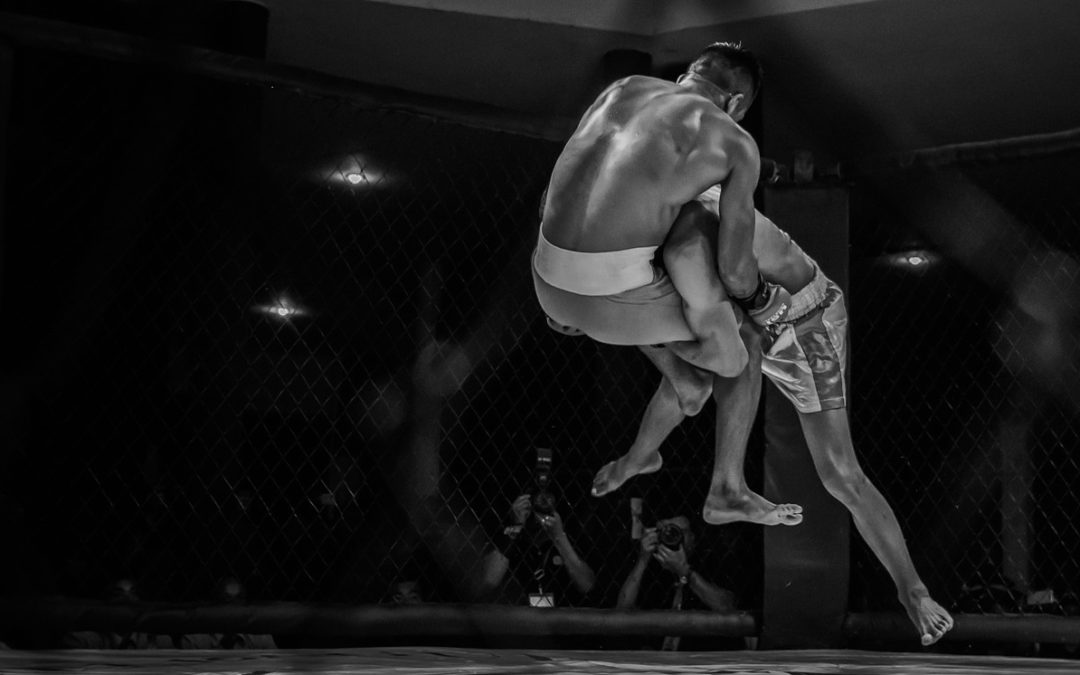 Picking winning fighters is only part of the puzzle when you’re on a mission to beat the bookmakers long-term. Of course, you have to place winning bets – but you also have to perform intelligent sports handicapping and consistently bet where the value is on your side.

A good bet isn’t always one that cashes, but rather a bet where the probability of winning is (ideally significantly) higher than the bookmaker’s line indicates.

Let’s say you cap two fighters with a 50/50 chance of victory, but one of them is available at a moneyline of +220. At that price, you’re looking at an implied probability of 31.3%, which gives you a 19.7% edge over the bookmakers (if your handicapping is accurate).

This was the exact price I got for Daniel Cormier before his 2018 heavyweight title fight with Stipe Miocic. I didn’t bet Cormier because I favoried him outright, but rather because I knew it was a line with immense value.

Handicapping is the process whereby you analyze all information about a fight and determine where you think the lines should be set in relation to where the lines actually are. The more time you spend watching fights from a betting perspective, the more proficient you’ll become at handicapping (so long as you’re prepared to refine and innovate based on results).

The most important facet of handicapping is tape study. These are some of the things I look out for when I’m analyzing footage.

Speed, athleticism and physical strength are important traits for a fighter. Particularly in contests whether neither combatant is highly skilled, being the superior athlete can give you a significant advantage.

If I’m putting cash on the line, I want to know that a fighter has good cardio. It’s difficult to back someone when they’ve shown a suspect gas tank and I’ll almost always pass unless it’s a highly favorable stylistic match-up.

For heavily muscled, high-powered athletes, explosive strength typically comes at a cost. Big muscles require more oxygen and if you’re not a master at fighting in bursts, swinging for the fences can leave you depleted quickly.

If the only footage I’d seen of Thiago Santos were his first round knockouts, I would have major reservations betting him in a fight that I’d expect to go into deep waters. As it happens, Santos has pretty good cardio for someone as muscular and powerful as he is, but that isn’t usually the case.

Durability is another concern. Betting on a fighter with a weak chin isn’t always a deal breaker, but there needs to be stylistic evidence that they’re unlikely to get annihilated by a single punch (i.e. they’re facing someone with no power or a grappler).

Pedro Munhoz is a fantastic pressure fighter, but his style wouldn’t be remotely viable without a titanium chin. If I’m backing a fighter that is defensively flawed, durability and recoverability must be verified.

Unlike other sports, there is no correct body type for MMA. However, different body types do come with advantages and disadvantages.

For fighters that are tall, narrow-framed and long in the limb, the most blatant benefit is that they can hit opponents at distance without being hit back. Of course, you need to master the skill of outside fighting to benefit from being long and tall.

A 6’3 lightweight with a 76-inch reach, James Vick embodies many of the positive and negative traits associated with a tall fighter. With good lateral movement, long straight punches and push kicks – Vick is often able to rack up points by picking opponents apart from the outside.

However, his defense consists of distance control and little else. He stands rigidly tall, with limited upper body movement and his chin exposed. If you’re able to pressure, cut off the octagon and work your way into the pocket, he’s there to be whalloped.

Wrestling defense is another common disadvantage for tall fighters. With long legs and a slim frame, this is not an ideal body type for stuffing takedowns. Consider Carlos Condit or Curtis Millender as examples.

I don’t mind betting on fighters that are short for their divisions either, but I want to know they can effectively close the distance and/or present a takedown threat. Mike Tyson was an excellent example of how to fight effectively as a short fighter – bobbing and weaving when he was at the end of an opponent’s punches and unleashing hell in the pocket.

A stocky, compact frame and low centre of gravity is a good body type for wrestling – offensively and defensively. Even without knowing Ilir Latifi has a wrestling base, take one look at him and it’s obvious that he’s nightmare to take down.

On the mat, stocky body types are ideal for top control whereas being long and lanky is useful for sinking in chokes and threatening with submissions from guard – but this all depends on whether they have the skills to correspond with their physical advantages.

Betting on MMA is all about examining the techniques shown by two fighters, then determining their strengths, weaknesses and potential paths to victory. If you’ve ascertained a weakness in a fighter that an opponent can capitalize on, and the betting public are oblivious to it, this is where the most value can be found.

On the feet, I’m interested to know these things about a fighter:

In terms of grappling, I’m looking out for the following:

The more information you can gather, the easier it is to envision the likely ways that a fight can play out. With that being said, skills and physical traits aren’t the only factors you must account for.

It’s important to remember that fighters are human beings with unique personalities and idiosyncrasies. Just because you’d expect them to fight to their strengths, it doesn’t mean that they will.

When someone has shown poor fight IQ in the past, it makes it difficult to get behind them – even in stylistically favorable contests.

Some shocking examples of poor fight IQ are as follows:

Not all fighters are equipped to deal with adversity. Some are great at being the hammer and crumble as the nail, while others thrive in wars of attrition.

Heart is not easy to quantify in terms of handicapping, but it’s something you need to be aware of. I can’t count the amount of times when fighters who were on the wrong end of the skills equation have come out victorious – just because they wanted it more!

While you shouldn’t let intangible factors sway your handicapping too much, it’s important to be aware of unseen forces that could affect your fighter – both positively and negatively. Here are some things to consider:

I’m a firm advocate for following fighters on Instagram and finding out what they’re up to. I like to see who they’re working with in training pics and want to ensure there are no obvious red flags leading up to the fight. You can also get vital information from fighter interviews on YouTube.

After sifting through hours of footage and dissecting all information available, how do you quantify the paths to victory for both fighters?

The truth is, handicapping is not an exact science. If I ask three of my sharp friends where a fight should be lined, I’ll get three different answers. What we can usually agree on is whether we think there is a significant edge over the bookmakers on either fighter.

I can’t perfectly articulate my handicapping process, but I can provide some glimpses into my thinking using a couple of recent examples.

This is one of the best examples where narratives surrounding a fight dramatically affected line movement. At the time, Max Holloway looked like the best featherweight on the planet, whereas Brian Ortega had barely won a round in the UFC and consistently rallied from behind in order to win.

Ortega could pull a submission out of thin air (which perhaps gave him an aura of invincibility), but he also blocked punches with his face and lacked the offensive wrestling to complement his jiu-jitsu game. Stylistically, it looked like he was in for a rough night because Holloway not only had the striking advantage, he had the takedown defense to keep the fight on the feet.

The reason I was able to bet Holloway at +100 (for an implied probability of 50%) was because he’d previously pulled out of a fight with Khabib Nurmagomedov and looked spaced out during fight week. He subsequently opened up about battling depression and there were rumours he was struggling to make the 145-pound featherweight limit.

Skill for skill, Holloway should have been capped around -400 (for an implied probability of 80%) if it wasn’t for the narratives surrounding the fight. These rumours ultimately proved to be irrelevant, as Holloway kept the fight standing and boxed Ortega’s face into oblivion.

Was I concerned that Holloway could be taking the fight in compromised condition? Absolutely, but at +100 it was a risk I was happy to take for 5 units.

One of the most inaccurate lines I’ve seen recently was UFC veteren, Diego Sanchez, available at the price of +295 (for an implied probability of 25.3%).

On the surface, it seemed appropriate that Sanchez should be a wide underdog. He’d taken massive amounts of damage over his career, was in his late thirties, was undersized at welterweight and was fighting a much younger and bigger opponent.

While Sanchez looked terrible against strikers who he couldn’t take down in Al Iaquinta and Matt Brown, he had an entirely different stylistic match-up in Mickey Gall, who is most known a jiu-jitsu player.

Despite his age, Sanchez always had incredible cardio and the same couldn’t be said for Gall. To top things off, Sanchez is a long-time jiu-jitsu black belt and has never been submitted.

Based on all the information available, giving Sanchez a 25.3% chance of winning was absolutely ridiculous. I favored him to win outright and placed a 2.5 unit wager. Even if you thought the fight was more of a 50/50 coin flip – Sanchez would have still warranted a bet at +295.

When a friend informed me that Eddie Wineland had a favorable match-up against a UFC newcomer, I was skeptical. Wineland is a skilled fighter, but he’s accumulated a lot of mileage on his body and was coming off a long layoff at 34-years-of-age. At -125 for an implied probability of 55.6%, I would’ve needed a strong reason to bet him, and I got one.

Not only was Popov older than Wineland, he’d spent most of his career fighting in Asia against lower level competition. Popov showed a decent kicking game, but he was flat-footed and defensively stiff.

I’ve seen this style of fighter struggle against more nuanced strikers. I believed Wineland’s footwork, feints and accurate punches would be too much for Popov – and this proved to be the case.

UFC newcomers are known to underperform in their debuts and although it didn’t turn out to be a factor, I felt Wineland would also have a grappling advantage.

Based on the information available, Wineland’s chances of victory had to be substantially higher than 55.6%.

It’s worth noting that these were three examples where my handicapping was on point. There are plenty of times when I cap fights incorrectly and my fighters underperform based on my expectations.

That’s fine as well, I don’t mind looking foolish. This is a long-term game and consistency is more important than perfection.