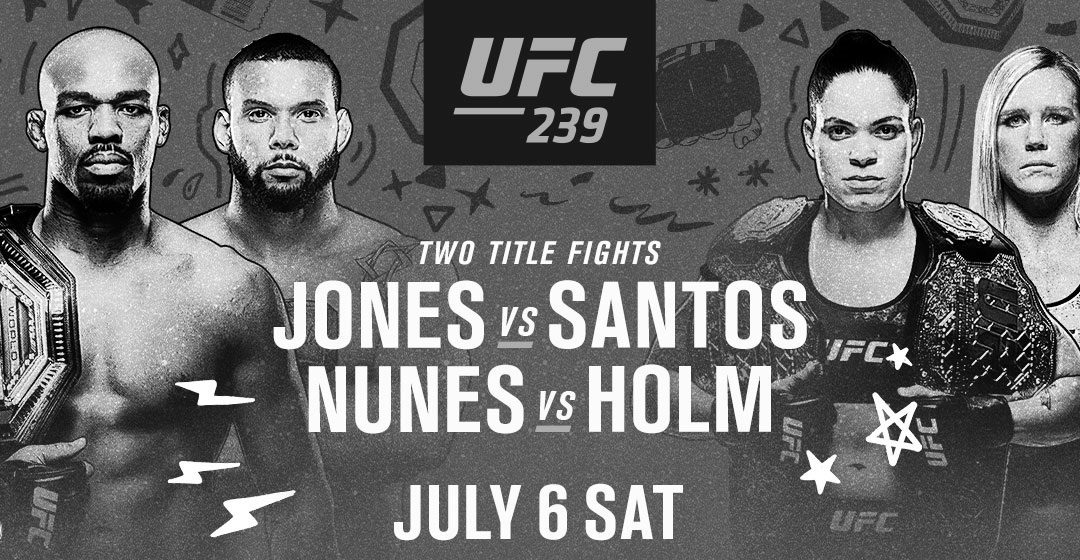 UFC 239 is a great card from a fan’s perspective, but I’m not a fan. The only thing I care about is cold hard cash and I’m disappointed in the betting opportunities this weekend. Still, since I’m too much of a degenerate to skip this card completely – here are my breakdowns of the fights where I have action.

This is a last minute bet made on Saturday July 6th, so the breakdown will be short. Marlon Vera is a dangerous striker, but his elbows, knees and kicks are his most effective weapons – I’ve never thought his boxing was very good. While he can lock up an opportunistic submission, Vera has never been much of an offensive wrestler either.

Nohelin Hernandez is taking this fight on short notice, but was preparing for a contest later in the month – so should be in shape. He fights out of American Kickboxing Academy and appears to be a boxing stylist. A fast and athletic combatant, he throws fluid combinations with his hands.

I’m not sure how Hernandez will deal with the kicking attacks from Vera, but I’m confident he’ll be able to land his own strikes in return. At +350 I’m happy to take a 1 unit gamble on Nohelin Hernandez as I think he’s a live underdog.

This is a bizarre match-up for the UFC’s stacked featherweight division, considering where both fighters are in their careers.

For years, Gilbert Melendez was one of the best lightweights in the world. With endless pressure, ferocious pocket boxing and takedowns blended in – Melendez gave opponents fits over the years. Now at 37-years-of-age and fighting at featherweight, it’s obvious he’s lost a step since his athletic prime (he also has an inglorious USADA suspension under his belt).

In his last contest against Jeremy Stephens, Melendez looked a step behind – even before he had his lead leg obliterated by low kicks. He will be fighting a much younger and faster opponent in Arnold Allen, who I believe the UFC are trying to build up.

Primarily a boxing stylist and fighting out of the southpaw stance, Allen has a crisp straight left, good counters and blistering hand speed. While he’s not necessarily the superior striker in this bout, I think he’ll be able to land the cleaner shots in open space.

With forward pressure and the threat of a takedown, Melendez could present problems for the less experienced Allen. We saw Mads Burnell find success with a grappling approach against the young Englishman before inexplicably getting caught in a submission.

While Allen’s takedown defense isn’t bullet proof, he is a great athlete and is competent at working his way back to his feet. Training at Tri-Star, he’s not at a camp where fighters are renowned for having weak defensive wrestling.

Ultimately, I think Allen is going to be too young, fast and precise for the ageing (but incredibly tough) Melendez.

I have some action on Arnold Allen at -275, but in retrospect I think I overpaid on this bet (hopefully I get away with it). I certainly wouldn’t touch Allen at his current price of -400, but I would consider playing his decision line around pick ‘em odds.

This is one of the most contentious fights of the weekend, and I’m reading a lot of polarized opinions online.

Relentless chain wrestler, Ben Askren, didn’t look great in his UFC debut. Despite winning (under strange circumstances), he struggled to take and hold down former welterweight champion, Robbie Lawler. It also looked like he got knocked unconscious during that fight, but the referee didn’t intervene.

The question still remains: is Askren’s grapple-only style viable at the elite level?

Well, I guess it depends on who he’s facing. I believe he’ll have no trouble taking down the likes of Carlos Condit or Neil Magny – but I’m not so sure how he’ll fare against Jorge Masvidal.

You could look to Masvidal’s fight with Demian Maia to see how he fares against a smothering grappler – but I’m not sure if that’s the best comparison. Maia has excellent entries into his takedowns, is fantastic at sweeping from bottom position (as he did against Masvidal in round 2) and is perhaps the best positional grappler in the history of MMA.

Askren is a great wrestler once he gets his hands on you, but his entries suck. He lunges forward like a zombie, hoping to clinch up where he can execute his favored body lock takedown. On the mat, Askren is a legitimate black belt – but Masvidal has good scrambling ability.

If Masvidal is able to consistently sprawl and disengage, he is going to kill Askren in open space. It’s amazing that Askren has been training under famed kickboxer, Duke Roufus, for years and still has zero striking fundamentals.

Both fighters have paths to victory and it wouldn’t be surprising if Askren was able to suffocate Masvidal for three rounds. With that being said, Masvidal sprawling and brawling his way to victory is entirely feasible too – and I much prefer his +190 price tag (compared to -240 for Askren).

If you want to hit those NSC lines and you live outside of the United States, check out Ohmbet (click here for the UK site).

Fresh from an emphatic knockout win over Cris “Cyborg” Justino for the featherweight strap, Amanda Nunes returns to the bantamweight division to defend her title against former champion, Holly Holm.

Once known as a beastly first round fighter that could tire herself out easily, Amanda Nunes has improved exponentially since joining American Top Team. Not only has her cardio got better, she now fights in a strategic manner.

While the Brazilian is a skilled grappler with a good double leg takedown and savage top game, she primarily likes to fight vertically and punch faces. She throws powerful straight punches and has legitimate knockout power for a female bantamweight.

While Holly Holm doesn’t have the best record against elite opposition, she’ll forever be known for her spectacular head kick knockout over former champion, Ronda Rousey. Fighting southpaw and coming from a boxing/kickboxing background, Holm has good lateral movement, a sharp left hand and an underrated kicking game – utilizing oblique kicks and front leg side kicks at distance.

The biggest knock on Holm is her striking accuracy, which isn’t great. Oftentimes her punches land a couple of inches short. This makes her look active in the eyes of the judges, but I suspect Nunes will get the better of the exchanges in open space.

Holm is in big trouble if she winds up on her back at any point, but her defensive wrestling is solid. In terms of pure physical strength, I think Holm can keep up with Nunes.

While Nunes is the rightful favorite, I think her -365 moneyline is a bit excessive. Even if Holm doesn’t win outright, I think she can keep this a competitive fight or at least avoid getting finished (she certainly won’t engage in a brawl).

In the light heavyweight division, Jon Jones is in a league of his own. “Bones” has cleared out the division and is set to destroy a new generation of challengers – including Thiago Santos, who has looked phenomenal since moving up from middleweight.

Standing 6’4 with a 84-inch reach, Jones is known for his lateral movement and range striking. It’s feasible he pumps out jabs and oblique kicks to make Santos look foolish at distance.

Jones is also a fantastic MMA grappler, with a college wrestling background. Even though Santos is a jiu-jitsu black belt, he’s most likely getting finished if Jones gets on top of him.

Skill for skill, no one is going to beat Jon Jones. However, this is MMA and the more technical fighter doesn’t always win.

On paper, Santos has many of the qualities that could cause problems for Jones: athleticism, the ability to close the distance quickly, unorthodox attacks, good cardio and knockout power.

One may say that Santos has a puncher’s chance, but that denigrates the Brazilian. Santos is a life-long martial artist and if he does land a death blow in the pocket, it won’t be because of luck – it will be entirely deliberate.

This is pure degeneracy, but I’m taking a 1 unit gamble on Thiago Santos at +545.

In addition to UFC Sacramento, there are three other MMA cards next week which are likely to have betting lines. Make sure you hit the form below and sign up to my mailing list for some exclusive tips.