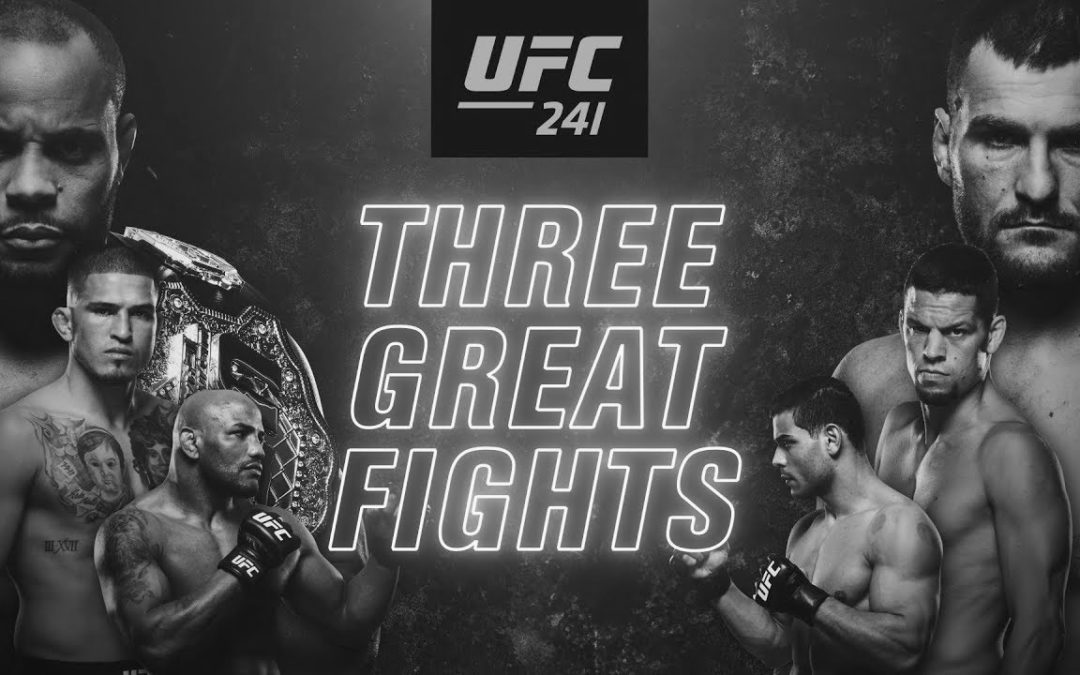 UFC 241 looks like a good card for betting. Here are my breakdowns of the fights where I have action.

Coming from a Muay Thai background, Sabina Mazo’s striking is centred around her kicks. The Columbian has a few crazy head kick knockouts on her record, but I wouldn’t call her a polished striker.

At 22-years-of-age and training at Kings MMA, you’d expect to see improvements from camp to camp. Currently, she has numerous deficiencies that can be exploited.

Mazo doesn’t have much in the way of pure boxing and she stands very rigid (with limited upper body movement). As we saw in her last fight, Maryna Moroz snapped her head back time after time with straight punches, and I think she’ll be susceptible to similar attacks from Dobson.

I feel Dobson is the far better boxer in this contest, but don’t forget about her kicking game. Dobson has an excellent inside leg kick and I’ve seen Mazo absorb a lot of low kicks in her regional footage.

I believe Dobson can apply pressure, force her opponent to fight off the back foot and jab her up. Mazo is an effective fighter at kicking range, but I just don’t see Dobson willing to accept that kind of fight.

Unless Dobson walks into a random head kick or Mazo has made massive strides since her last fight, I think this will be quite one-sided.

I hate to criticise professional athletes as I sit here like a douche lord drinking beer on the internet, but I don’t think Jodie Esquibel belongs in the UFC.

While she has some boxing fundamentals, Esquibel may win the award for least accurate striker in women’s mixed martial arts. Her punches constantly land a few inches short from the intended target.

I think Esquibel will be on the wrong side of the speed equation against a younger opponent in Hannah Cifers.

In contrast to the boxing-centric style of Esquibel, Cifers is the more dynamic striker – with good low kicks at range, powerful hooks in the pocket and deadly knees as well as dirty boxing in the clinch. The lady is a pure savage and despite her small stature, seems to be physically strong and has good takedown defense (although I doubt she’ll need it here).

I have Hannah Cifers to close a 2 unit parlay and I’m confident she gets the job done.

When you think of fighters in the UFC with an unbalanced skill set, Manny Bermudez comes to mind. He’s a phenomenal jiu-jitsu player that will chain submission attempts until you tap out or pass out. However, he’s not much of an offensive wrestler and despite having some pop in his right hand, has no fluidity on the feet.

Despite his obvious limitations, how come he keeps winning fights by way of first round submission? Well, he undoubtedly has a world class ground game, but his opponents have not been fighting him in an intelligent manner (I’m looking at you, Albert Morales).

You can only get so far by locking in guillotines from a standing position or hoping your opponent is dumb enough to tie up with you. Sooner or later, someone is going to come out with the game plan to sprawl, disengage and strictly kickbox. But will it be this weekend?

Casey Kenney has all the tools to win this fight. He’s a great wrestler and scrambler with a jiu-jitsu brown belt. I also like his southpaw kickboxing game and he should have enough more than enough skills to win a striking battle at distance

The problem with Kenney is that he often grinds on opponents and takes them down. Will he have the IQ to avoid offensive grappling altogether?

Remember guys, we’re not betting on Harvard graduates to make the most rational decisions for the betterment of their careers. These dudes voluntarily chose an occupation that entails being punched in the face inside a steel cage.

There are some intelligent fighters out there, but there are also some really dumb ones, and I don’t know anything about Kenney as a person. For this reason, I’m betting 2 units on Casey Kenney at +110. This would be a bigger bet if I knew he’d fight to his strengths.

At 42-years-of-age, one may assume Yoel Romero should be slowing down by now, but that doesn’t seem to be the case. Every fighter has an expiry date – unless you’re from Cuba, in which case normal rules don’t apply. Those dudes are from a different breed.

As phenomenal as Romero is as a wrestler, most of his finishes come on the feet. Fighting from the southpaw stance, he packs ludicrous power in his left hand and is unpredictable with his offense. He’ll lull you to sleep with a relaxed cadence, then instantly switch gears and splatter your brain with a flying knee at warp speed.

With his muscle-bound frame, the Cuban is adept at fighting in bursts. He’s either unloading or reloading at any time. On paper, forcing someone like this to fight at a consistent high pace seems like an obvious path to victory – and that’s what I assume Paulo Costa will try to do.

Costa is known for his high pressure, power-boxing attack. He gets in the face of an opponent and makes them melt – just like ice cream on a summer’s day, or like Twitter handicappers when they’re asked to produce a betslip of their winnings.

Fighting from the orthodox stance, Costa displayed good body kicks against a previous southpaw opponent in Johny Hendricks and I’m sure he’ll look to blast Romero with kicks to the open side as well.

While Costa is the more technical striker, he isn’t afraid of absorbing damage in order to impose his style of fight. That could be catastrophic against a guy that can end your night in a blink of an eye (although Costa does seem to have an resilient chin).

Costa has never fought a wrestler of this calibre before. While his takedown defense looked fine against a depleted and shopworn Hendricks, we don’t know if he’ll be able to stuff the shots of a world class wrestler like Romero. If Costa does get taken down, he could quickly get elbowed to death like Romero’s previous victim, Lyoto Machida.

There are numerous ways this fight could play out. Romero could end the fight with a flying knee or huge left hand, or score a finish via ground and pound, or possibly even win two rounds with positional control on the mat. On the other hand, Costa’s pace, body kicks and forward momentum might be too much for an ageing contender in Romero.

I have no idea who wins this fight, but I feel like pick ‘em odds would be more accurate. For this reason, I’m taking a 1 unit gamble on Paulo Costa at +162.

The first time these legendary heavyweights locked horns, I made some sweet cash on Cormier as a +220 underdog. That fight was a good example of why you should play numbers, not fighters, but this time the odds are much closer.

Stylistically, I can’t see how anyone can have a strong read on this. Both fighters have good cardio, crisp boxing, strong wrestling and an insatiable desire for victory. You could give Miocic an advantage in terms of height and reach, but he does his best boxing at mid-range, so it’s not really a factor.

Miocic has never been a defensive wizard and got caught with his hands low last time, so I can see why Cormier is the favorite. Personally, I think this is as close to a 50/50 match-up as you can get.

I’m going to pass on Stipe Miocic as a +125 underdog, but if he gets to around +150 then I will certainly roll the dice.

Last week I hit a nice underdog on the Contender Series. If I have any action this Tuesday, I’ll send my picks to my mailing list.