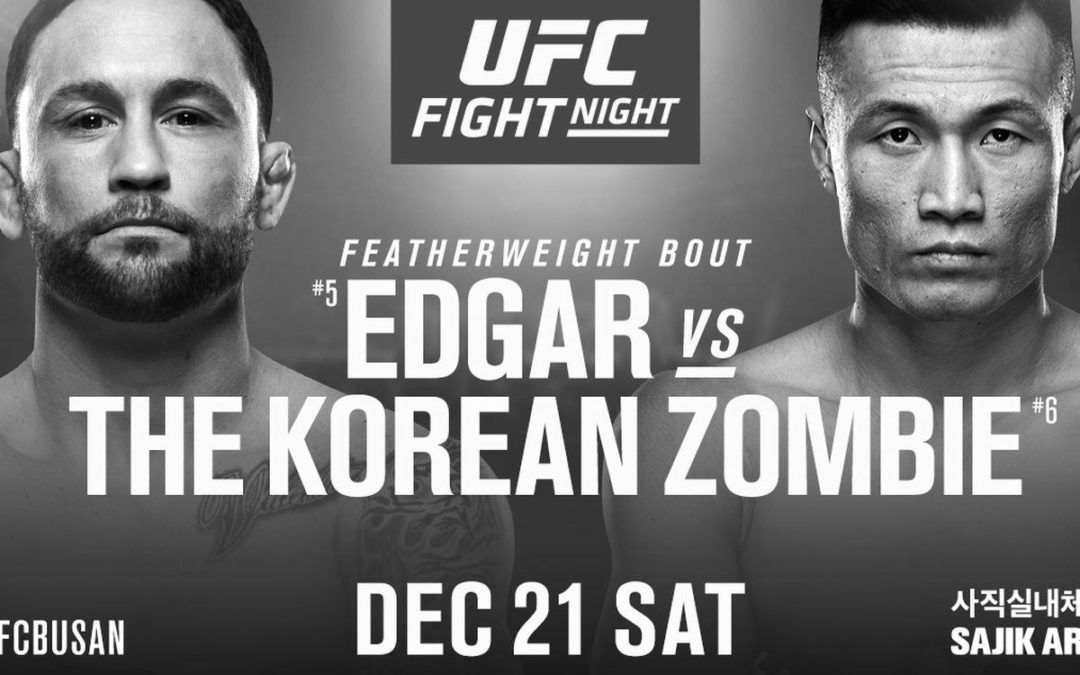 For some reason, big PPV cards are usually my worst for betting – and UFC 245 was no exception. Oh well, bad nights are inevitable in this crazy game of sports betting. I’m looking to get back on track this weekend as the UFC heads to Busan, South Korea.

Here are my breakdowns for the fights where I have action.

Coming off a long injury layoff, Ryan Benoit returns to the UFC and is competing at bantamweight for the first time in his career. “Baby Face” was one of the hardest hitting flyweights in the division, so it will be interesting to see whether his power transfers at a higher weight class.

Outside of his concussive power, there isn’t much that jumps out to me about Benoit. He tends to load up with single strikes, isn’t very defensively sound and despite a successful highschool wrestling background, can be taken down quite easily. With that being said, Benoit is a tough guy to hold down for extended periods.

Heili Alateng is not a world beater himself – although he seems like a good athlete, with fast hands and an extensive wrestling base. The Chinese fighter is living and training in the Shanghai Performance Institute as part of a developmental program with the UFC, where he has access to world class equipment and coaching.

While he has a mixed record, many of Alateng’s losses came earlier in his career. His only recent loss was against Kai Asakura, who is currently one of the best fighters in Asia.

Many of Alateng’s past opponents have been much taller and longer than him. For once, he’ll be fighting an opponent with a similar body type – so won’t have to struggle with closing the distance.

Alateng is hittable, but he throws with speed and precision on the inside. I think he can find a home for his right hand on the chin of Benoit. If the fight is competitive, I believe Alateng can land takedowns in order to stamp an exclamation point on rounds.

The intangible factors also favor the Chinese fighter. Benoit has struggled with gruesome injuries throughout his career, sustaining major damage in his last fight two years ago. The American also stated that he doesn’t enjoy long trips overseas or dealing with jet-lag.

Alateng used to fight in Korea and may have the crowd on his side. As we know, when the fans are over-reacting to one fighter – this can sway the judges in a close fight.

It’s entirely possible Heili Alateng gets knocked unconscious, but I believe he’s more likely to win rounds. I’m placing a small wager on the Chinese fighter as an underdog.

Is Volkan Oezdemir finally hitting his stride? Once known as an unpolished power puncher that would fade after one round, the Swiss fighter has looked more composed in his last few performances.

He fought well in his split decision loss to Dominick Reyes (who is now fighting for the title) and then successfully executed a pressure-heavy game plan against a declining Ilir Latifi.

Oezdemir’s best chance of beating Aleksandar Rakic is by landing heavy combinations on the inside, thus effective pressure will need to be part of his strategy. However, Oezdemir got hit a lot while pressuring Latifi, and will be in big trouble if he absorbs similar shots from Rakic.

Signs indicate that Rakic could be an elite fighter at light heavyweight. He showed some vulnerabilities against Devin Clark who took him by surprise by starting aggressively, but he’s impressed me in his other three UFC fights.

The Austrian is a skilled kickboxer, fantastic athlete and has an ideal frame for the light heavyweight division. He’s also an underrated grappler, so may seek to put Oezdemir on his back (where he looked weak in his title fight against Daniel Cormier).

While Oezdemir could realistically win by knockout, I think he’s going to leave too many openings for Rakic to exploit.

This is by no means a lock, but I think Aleksandar Rakic should be a bigger favorite than his -147 price tag indicates.

After Bryan Ortega pulled out of this main event slot due to injuries, the legendary Frankie Edgar steps in to take his place. Interestingly, Edgar was training for a fight at bantamweight – yet will be taking this fight at featherweight.

There are so many positive attributes to Edgar’s game, such as: magnificent footwork, slick boxing and great takedowns with well-timed entries. He’s now 38-years-of-age, but I don’t believe we’re looking at a shot fighter.

While it’s not ideal preparing for a bantamweight fight in America and then switching to a featherweight fight in Korea on short notice, Edgar has some advantages in this match-up.

Firstly, “Korean Zombie” is hittable. He leaves his chin exposed, doesn’t check leg kicks and is quite stationary. Edgar may be able to perplex the Korean fighter with elusive footwork and the threat of the takedown.

Also, it’s impossible to get a read on Jung’s takedown defense. He stuffed all shots from Dennis Bermudez with ease, but was thoroughly out-grappled by Jose Aldo six years ago.

The Korean has an excellent ground game, but so does Edgar. If the fight hits the mat, it will be on Edgar’s terms and he’s unlikely to get swept or caught in a submission from guard.

Jung’s biggest advantage is his knockout power. One perfectly executed knee or uppercut from the Korean could end the fight in an instant, although I think Edgar is better equipped to win rounds.

I’m on the fence about betting this fight, but I feel the value is with Frankie Edgar at +150.

If I have any action for the two Bellator cards this weekend, I will be sending the plays out via email.