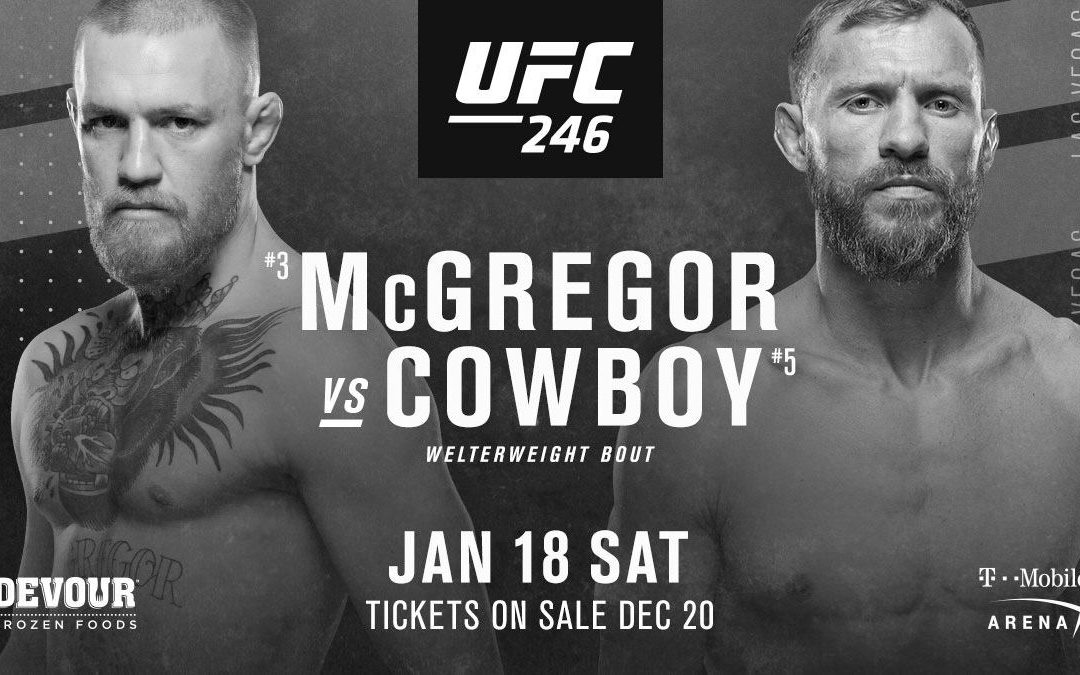 The first UFC card of the year is a big one, as the legendary Conor McGregor returns to action after a long layoff. I’m not in love with this card from a betting perspective, but I’ve found a few spots that I’m pleased with.

As always, here are my breakdowns for the fights where I have action.

The man with the best mullet in the game, Justin Ledet, hasn’t had an easy time since dropping down to the light heavyweight division. Although Aleksandar Rakic and Johnny Walker aren’t bad names to lose to, he was defeated emphatically in both bouts.

With no sign of him on social media for the past year, it’s unclear what he’s up to and how seriously he’s taking the fight. Personally, I’m not ready to write him off just yet.

Predominantly a boxer, Ledet has extremely fast hands for a big man and one of the best jabs in the game. Being 4 inches taller than his opponent and with a 5-inch reach advantage, it’s obvious Ledet will look to pump out that jab and fight long.

Like most boxing stylists, Ledet is susceptible to low kicks – although this doesn’t seem to be part of Aleksa Camur’s arsenal.

Fighting out of Ohio’s Strong Style Fight Team, Camur is a main training partner of UFC heavyweight champion, Stipe Miocic. While he seems like a good athlete with explosive power, I question whether he’s at the right weight class. His body type appears more suited for middleweight, although he is heavily muscled at 6’0 tall.

In terms of skills, the Ohio native looks like a reasonably proficient striker – but I’m not overawed by his regional footage. Takedowns would represent a clear path to victory against Ledet, but I haven’t seen evidence of an offensive wrestling game.

At only 24-years-of-age, it’s likely Camur is making strides from camp to camp. The version of him we see this weekend could be vastly improved from his Contender Series bout in July 2019.

There are a lot of question marks on both fighters and generally I prefer to have more information before placing a bet. With that being said, I feel Ledet is the more technical striker and should be able to keep the smaller Camur at bay.

I’m taking a 1 unit gamble on Justin Ledet at +110 with the full knowledge I could look foolish.

Two tenacious grapplers lock horns in what looks like a mirror match. I anticipate there will be lots of scrambles and crazy exchanges on the mat in this one.

At first glance, both combatants seem closely matched. Neither fighter is polished on the feet, yet both men have high level ground games.

Chas Skelly is an excellent back taker. His most likely path to victory is an early rear-naked choke or riding out the first two rounds with back mount.

However, Grant Dawson is the stronger wrestler, which suggests the fight will only hit the mat on his terms.

As the much younger man, Dawson appears to have the cardio advantage. We’ve seen Skelly fade after the first round and he’s going to have to fend off a grappling onslaught from an opponent that just keeps coming and coming.

I can see the first round being relatively competitive, but I believe Dawson’s tenacity will pay off the longer the fight goes.

I bet Grant Dawson at the generous price of -187, although his current -250 price tag feels about accurate.

People thought I was crazy for betting Nasrat Haqparast at -250 against Joachim Silva, but the price looked more than justified in retrospect. I’m really high on this kid and at only 24-years-of-age, his future looks bright.

Fighting out of the southpaw stance, Haqparast is known for his slick footwork, blistering hand speed and masterful use of angles. The young German can also wrestle, which could be a path to victory against Drew Dober – who has looked questionable off his back in the past.

Dober is also a southpaw, with a background in Muay Thai. Over the years, he’s worked to improve his footwork – which separates him from other rigid and hittable Muay Thai stylists.

While not as nuanced as his opponent, Dober is certainly an effective striker. He does his best work when squaring up to adversaries and firing hooks in the pocket.

Both men like to pressure and push their opponents back, so it will be interesting to see who gets bullied in this one.

Dober is no pushover, but I’m inclined to believe Haqparast’s speed and use of angles will cause some major problems.

It’s worth noting that Haqparast is a training partner of Olivier Aubin-Mercier, a fighter that defeated Dober in the past. I think the coaches at Tri-Star will be able to come up with a solid game plan for an opponent like Dober, who is relatively easy to analyze.

I was happy to bet Nasrat Haqparast at the early price of -185, but there is absolutely no value left at -300.

Conor McGregor is fighting again and the circus is back in town. After going off the rails for the past few years, it will be interesting to see what version of the Irish superstar shows up.

On paper, Conor has the perfect attributes to win this match-up. A southpaw with arguably the best left hand in MMA, the Irishman is highly skilled at setting opponents up for the kill shot.

He’s also a fast starter, winning a high percentage of his fights in the first round. Going against a slow starter who is defensively vulnerable in boxing range, Conor should win this fight by early knockout.

Here is the thing though: Conor hasn’t fought in a while and has been known to gas. Although his cardio held up quite well against Khabib Nurmagomedov, he gassed in both fights against Nate Diaz, as well as in his boxing match with Floyd Mayweather.

Cerrone’s cardio has never been in question and there is a realistic possibility he comes on strong if he can survive the first 7.5 minutes of the fight. Cerrone may not be the slickest boxer, but he’s a very legitimate Muay Thai striker with devastating leg kicks and a high kick that can disconnect anyone from their consciousness.

It’s also possible Cerrone could take the fight to the mat. He’s incorporated takedowns into his game more frequently in recent years and should have a massive advantage in the jiu-jitsu realm.

While you have to side with Conor to win this contest outright, there’s no way I would recommend betting him at -300. I’ll be watching how the fight unfolds with a view to live bet Donald Cerrone after the first round.

Do you like high risk, high reward prop bets? I’ll be emailing out a list of my favorite prop bets on the day of the event, so sign up here.