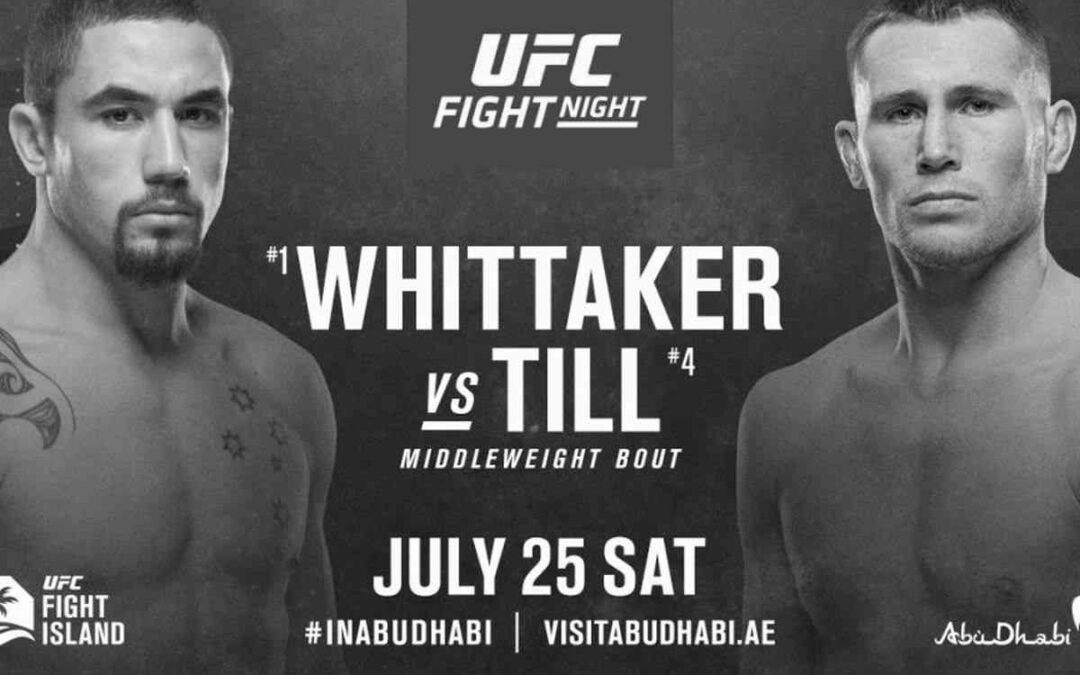 I’m coming off a frustrating night where I lost 2.3 units. Hopefully this weekend will be better as Robert Whittaker and Darren Till headline the last of the Fight Island events.

Here are my main card breakdowns for UFC on ESPN 14.

What is the point of this fight?

We just saw Khamzat Chimaev take down and dominate a full-sized middleweight in John Phillips and now he’s returning to the welterweight division to take on an undersized UFC debutant.

Chimaev looks like a brilliant prospect, but I think the UFC should fast track him. We’re not going to learn anything after he dismantles another out-matched opponent.

Rhys McKee has some skills on the feet, but tenacious grapplers seem to be his kryptonite – just go back and watch his lightweight fight with Terry Brazier from 2018.

Unless he can lock in a miracle armbar or triangle off his back, Rhys McKee is going to die.

Alex Oliveira is one of the most exciting fighters to watch, perhaps because he’s blessed with incredible athleticism and cursed with low fight IQ.

To his credit, the Brazilian fought more intelligently against Max Griffin. Instead of brawling like he usually does, he maintained distance effectively and peppered his opponent from the outside with low kicks, front kicks and long straight punches.

Interestingly, Oliveira’s offensive wrestling seems better than his takedown defense. He can wreak havoc from top position, but seems useless off his back.

If Peter Sobotta can establish a dominant position, I think he has a good chance of finishing the fight. The German is a black belt under Dean Lister and is fully capable of choking Oliveira unconscious if he takes his back.

While he doesn’t possess the same freakish athleticism as his opponent, Sobotta can hang on the feet. Fighting from the southpaw stance, Sobotta has a decent left hand and left body kick.

I could see this fight going either way, but I think the value is with Peter Sobotta at +150.

I’ve been critical of Paul Craig over the years. The Scotsman has pulled off some miracle submissions off his back, but I never liked his overall skill set.

To his credit, it looks like he’s made improvements to his striking. Against a shopworn Mauricio “Shogun” Rua, Craig was getting the better of the ageing veteran on the feet – much to everyone’s surprise.

Craig was throwing check left hooks and front kicks like a pro. He looked much more comfortable on the feet than in previous performances .

Unfortunately, he wasn’t able to keep the fight standing and I fear the same thing may happen against Dagestani grappler, Gadzhimurad Antigulov.

He might not be the cleanest striker in the world, but Antigulov’s boxing is serviceable enough to help him close the distance on opponents. His primary objective is to shoot single and double leg takedowns, dominate from top position or maneuver his way to back mount and get the submission.

If he’s unable to get the fight to the mat, Antigulov looks completely lost – as we saw in his fights with Michał Oleksiejczuk and Ion Cutelaba.

I don’t think the Dagestani fighter will have trouble landing takedowns on Craig and he’s unlikely to get caught in a guard submission. The main risk for Antigulov is that he tires as the fight progresses, which will make it harder for him to secure takedowns.

It’s not common for Craig to have the striking advantage, but he does in this match-up.

I feel this is a favorable match-up for Gadzhimurad Antigulov, but I’m not confident enough to bet him at +105.

I’m impressed by the striking skills of Marina Rodriguez. On the feet, I expect the fight to look extremely one-sided as the Brazilian uses her long range weapons against a shorter opponent.

Rodriguez also loves the Thai clinch and will fire devastating knees to the head and body whenever she’s able to tie up.

Success or failure for Rodriguez depends on whether she’s able to keep the fight upright.

While her takedown defense held up fine against Tecia Torres, she was taken down and dominated on the mat by a more skilled grappler in Cynthia Calvillo.

Carla Esparza’s boxing has come a long way since she first entered the UFC, but she cannot hang in a striking battle with Rodriguez. “Cookie Monster” must rely on her NAIA Division 1 wrestling background and get the fight to the mat as soon as possible.

Will she be able to? I wish I had a definitive answer.

Esparza has good entries into her takedowns and could catch a kick in order to get the fight to the mat. Her top control is not the best, but that doesn’t necessarily matter if she can rinse and repeat with takedowns.

I’ll side with the more physically imposing kickboxer in Marina Rodriguez, but I don’t have enough faith in her takedown defense to play her at -180.

At 42-years-of-age, I suspect Fabricio Werdum is on a hard decline. After a long USADA suspension, the Brazilian looked absolutely terrible in his return fight against Alexey Oleinik.

I’m expecting Werdum to have better cardio in this contest, because he’s going to get smoked if he shows up in a similar shape to last time.

Even at his age, Werdum is a wizard on the mat. The problem is, I don’t think he’ll be able to score takedowns and he’s out-gunned on the feet.

The Brazilian has developed a solid Muay Thai game over the years under Rafael Cordeiro, but I don’t think he’ll be able to contend with the slick boxing and footwork of Alex Gustafsson.

Coming out of retirement and moving up to the heavyweight division, there are some questions over Gustafsson as well.

The Swede looks like he’s packed on some pounds for this camp. Whether that makes him more powerful or just more lethargic remains to be seen.

Gustafsson has always had good defensive wrestling, I just hope his boxing hasn’t regressed because the heavyweight division could use a new contender.

Skill for skill, this looks like a favorable match-up for Alex Gustafsson but I have zero interest in betting him at -350.

I’m not sure what the matchmakers are trying to achieve with this. We’ve already seen these legends compete against each other twice, only this time both men are way over the hill.

Antonio Rogerio Nogueira will look to utilize his southpaw boxing skills in this contest. Having represented Brazil at the international level, his boxing is his best asset and he still packs power in his punches.

While Nogueira is a third degree jiu-jitsu black belt, he’s nowhere near as effective off his back as he is when he’s in a dominant position. As we saw in the previous bouts, he’s at a wrestling disadvantage and won’t be able to dictate where the fight takes place.

Mauricio “Shogun” Rua is renowned for his Muay Thai acumen and he found a home for the right body kick against the southpaw Nogueira in their last encounter. However, his knees and reaction times look completely shot at this stage of his career and he had major issues with Paul Craig on the feet in his last fight.

Rua is a jiu-jitsu black belt with a solid top game and I expect him to wrestle early and often.

Positional control on the mat seems to be the most obvious path to victory for Rua, but will he get blasted with a big left hand before he can get the fight to the floor? I have no idea!

While “Shogun” is the deserved favorite, I wouldn’t dare bet him at -200.

Robert Whittaker vs. Darren Till

This is a fantastic main event. In a striker versus striker match-up, we’ll get to see either Darren Till or Robert Whittaker move one step closer to a title shot.

Having been to the top of the mountain and then fallen in spectacular fashion, Robert Whittaker has experienced the extreme highs and lows that come with the sport.

After running his body into the ground during brutal training camps and eventually getting knocked out cold in a championship bout, Whittaker took some time away from the sport. It sounds like he’s in a much better place now – both physically and mentally.

When he’s at the top of his game, “The Reaper” is a problem to deal with. He comes from a traditional martial arts background and likes to attack in blitzes.

He has excellent movement, fluid combinations, a devastating head kick and a mean left hook – which might be a useful weapon in this match-up.

Don’t sleep on Whittaker’s grappling either. He’s won numerous freestyle wrestling tournaments and was set to represent Australia in the Commonwealth Games – although he did not compete due to scheduling conflicts with the UFC.

We usually see Whittaker wrestle defensively, but it wouldn’t be the strangest thing in the world if he decided to shoot takedowns on a pure striker in Darren Till.

It’s crazy that Till had so much success at welterweight, because he must have been killing himself to make the weight. The guy looks like a full-sized middleweight and I hope he remains at the weight class for the rest of his career.

Coming from a Muay Thai background, Till’s skill set is basic, yet effective. Fighting from the southpaw stance, his game is all about setting opponents up to get obliterated by his nuclear warhead of a left hand.

This isn’t to say he lacks finesse or tactical awareness (he certainly does not), but he’s always looking for the opportunity to land the left cross and leave opponents unconscious on the canvas.

The Englishman has good footwork and a thudding left body kick, but he has some defensive holes. He got caught with his chin high against Jorge Masvidal and I could see something similar happening in this match-up.

I like Robert Whittaker in this main event and there might be some value on him as a slight favorite.