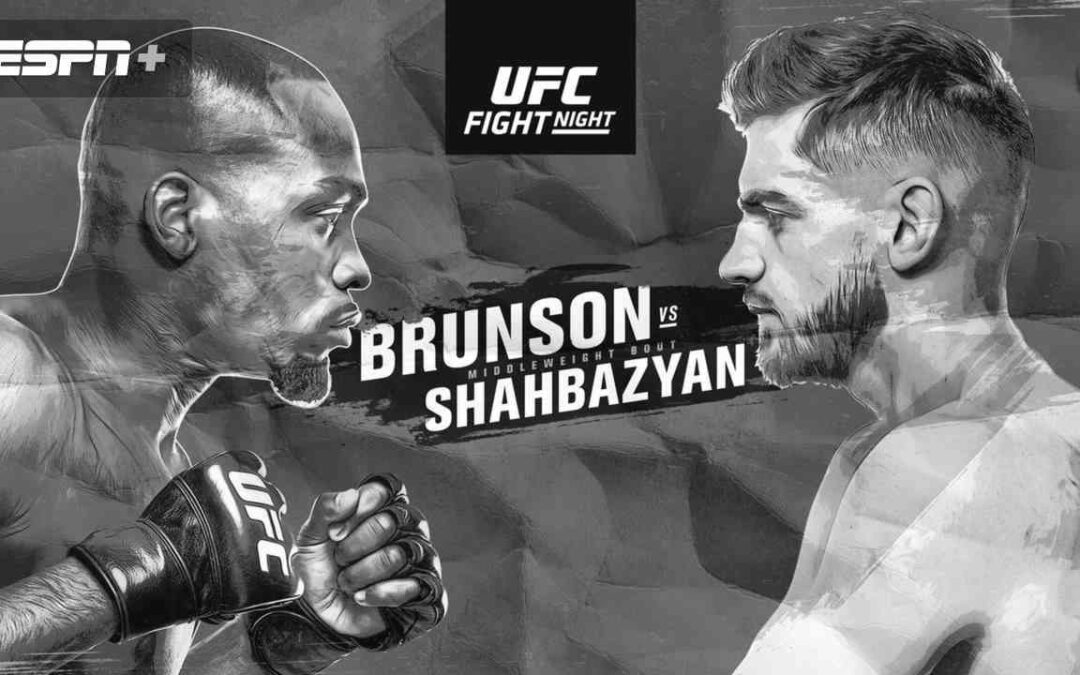 I’m coming off a solid weekend where I won 3 units. I’m looking to keep momentum rolling as the UFC returns to Las Vegas for an exciting fight card, headlined by Derek Brunson and Edmen Shahbazyan.

Here are my breakdowns for the main card of UFC on ESPN+ 31.

This is some hilarious matchmaking, because Kevin Holland and Trevin Giles are both renowned for their lack of fight IQ. We’re likely in for a wild brawl, for however long it lasts!

Holland is a skilled kickboxer with a beautiful vocabulary of strikes in his arsenal. Standing 6’3 with an 81-inch reach, “Trail Blazer” is excellent at picking opponents apart from the outside, but is competent when he’s forced to fight at close range too.

To his detriment, Holland isn’t much of a wrestler and can be taken down easily. He does have a black belt in jiu-jitsu, although he’s not the most positionally sound grappler.

Holland doesn’t cut much weight for his middleweight fights, so he should be at a significant size disadvantage.

While he’s giving up some height and reach in this match-up, Giles is the natural middleweight. Whether he chooses to make the extra weight count or not with a wrestling-heavy approach, I have no idea.

Generally speaking, Giles is content to box. He throws smooth combinations and has power in his right hand, but he’s susceptible to low kicks.

Unless he’s able to hurt Holland, I think Giles will struggle to win rounds on the feet against a more diverse striker. The Apex facility uses the smaller octagon and Giles will be the one looking to close the distance, so at least that favors him.

Giles makes particularly bad decisions when it comes to grappling, so don’t be surprised if he leaves his neck or arm in the wrong place and gets submitted.

I’ll pick Kevin Holland to win this fight, but he is the last guy I would trust at -210.

The first time Bobby Green and Lando Vannata locked horns, the fans were treated to an exceptional fight, and I’m expecting another explosive affair this weekend.

While he comes from a wrestling background, Vannata is legendary for his flashy striking displays. He has a wide array of offensive weapons and his style is very aesthetically pleasing.

Vannata is not the most defensively sound fighter – he frequently gets caught with his chin high and hands low. Perhaps this is why his fights are always exciting?

“Groovy” doesn’t wear damage well and often mismanages his energy, which makes him difficult to trust if you’re betting him as a favorite.

As far as pure athleticism goes, I give Green the advantage. He has fast hands, is difficult to take down and can fight hard for fifteen minutes with no problems.

Green has precise boxing, although he’s a little low on volume. This lackadaisical approach has cost him in the past, since he seems content to coast when he thinks he’s winning on the scorecards.

Green is the more defensively responsible striker. He absorbs 3.52 significant strikes per minute, whereas Vannata absorbs 4.73.

I’d take the plus money on Bobby Green if I was forced to bet this fight, but I’d rather just sit back and enjoy the fireworks.

If I wanted to get a casual friend into MMA, Vicente Luque is one of the first fighters I would show them. Luque is more than capable of fighting technically, but he just loves to bite down on his gum shield and throw hands.

Look for Luque to move forward with heavy pressure and attack the lead leg of his opponent. He has some nasty calf kicks and if he can take away your movement, then you’re a sitting duck for his combinations on the inside.

We don’t really see him shoot takedowns, but he has a solid ground game that he can rely on if things get dicey on the feet.

The big criticism of Luque is that he relies on his toughness a bit too much. Sooner or later, that chin is going to crack and he may not have much longevity if he keeps getting into brawls.

Randy Brown will look to fight long and maximize his reach advantage. With lots of lateral movement, I expect Brown to land long straight punches and front kicks to the body of Luque.

The big worry for Brown is his susceptibility to low kicks. He has skinny legs and I don’t know how many flush calf kicks he can absorb before he starts limping.

While Brown can lock in an opportunistic submission, his defensive wrestling is weak and he’s conceded takedowns in the past from caught kicks. He needs to keep the fight standing at all costs, because he will be at a severe disadvantage if he winds up on bottom.

I think Vicente Luque will win this fight with leg kicks and pressure, although I don’t like his -190 price tag.

Since moving her training to Syndicate MMA, Joanne Calderwood has revitalized her career. She has recent wins over Andrea Lee and Ariane Lipski, and also gave Katlyn Chookagian a good run for her money.

Calderwood is a Muay Thai striker first and foremost. She attacks with all eight limbs and makes up for her lack of inherent athleticism with tenacity and grit.

The Scottish fighter is not a defensive wizard. She lacks footwork and upper body movement, and this could be problematic against an aggressive opponent that will come forward and throw hands.

Jennifer Maia has less offensive weapons than her opponent, but I believe she has a speed advantage and she definitely has the sharper boxing. The Brazilian is severely out-gunned at kicking range, but I don’t think she’s going to have a problem closing the distance on an opponent that lacks footwork and power.

The small cage should favor the fighter looking to close the distance, and that’s Maia in this case.

I assume Calderwood will look to clinch whenever Maia enters boxing range, but I’m not sure she will have a big advantage there. Maia has good dirty boxing and landed some short shots on Roxanne Modaferri to escape the Thai clinch.

Maia’s biggest weakness is her bottom game and we’ve seen Calderwood shoot more takedowns in recent fights. Calderwood will need to time her entries well, because Maia’s takedown defense against the fence is solid and she also has good balance and a low center of gravity.

Before his last fight, I wasn’t sure whether Edmen Shahbazyan was the real deal and I actually bet Brad Tavares against him. My reasoning was that Shahbazyan had shown ferocity on the inside with hooks, uppercuts and elbows, but I felt he would be the less technical out-fighter.

That proved to be false, as he dropped Tavares with a superb 1-2 and then finished him with a head kick.

The young prospect is not just a striker. His offensive wrestling looks strong and I’d be surprised if this doesn’t also correlate with good takedown defense.

There are some questions about Shahbazyan’s cardio. He slowed down against Darren Stewart, although he did a lot of wrestling in that fight.

His cardio might be absolutely fine in a fifteen minute kickboxing match.

Derek Brunson is a strong wrestler with knockout power, but he’s not getting close to a title shot at 36-years-of-age.

Fighting from the southpaw stance, Brunson’s left hand is his primary weapon – although he lunges forward with his chin high when trying to land it.

Brunson always has a puncher’s chance, but he’s too open defensively and his chin is declining. I also can’t see Brunson having much luck with a grapple-heavy game plan.

The price is getting steep now, but I think this is the fight where Edmen Shahbazyan moves from prospect to contender.

Plays are available at MMA Oddsbreaker Premium, although most of the value is gone now.