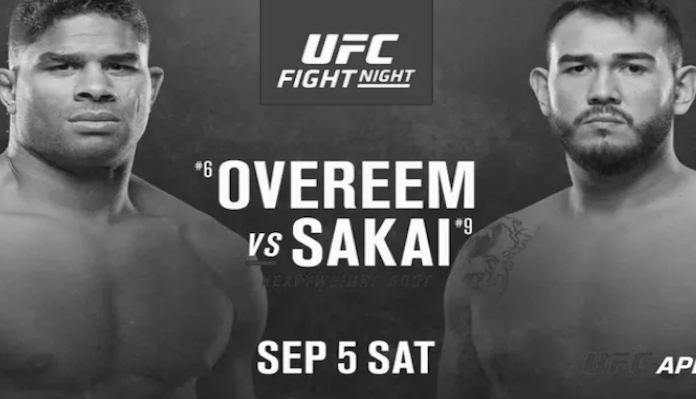 Sorry there was no article last week. I actually published it, yet it was removed due to a technical problem with WordPress.

I’m in the world’s crappiest hotel room with limited Wi-Fi, but fortunately I managed to get a bunch of tape studying done before I left. I wasn’t able to check out Brian Kelleher’s opponent, so I apologise for skipping that fight in this main card betting prediction article.

Training out of American Top Team, Thiago Moises has developed a solid skill set at 25-years-of-age.

The Brazilian possesses an excellent top game and you can clearly see he’s been putting in the work on the wrestling mats. Moises shoots good single and double leg takedowns and he times his entries well.

His striking isn’t bad either. He throws clean combinations and has some nasty elbows on the inside.

The Brazilian’s best weapons are his jab and low calf kick, although that isn’t ideal against a skilled southpaw striker like Jalin Turner. To negate the reach disadvantage, Moises may have to use the inside low kick.

We saw Michael Johnson (also a southpaw) put on a striking clinic for one round against Moises, before doing what he does best and getting submitted in round two. If the fight stayed standing, I think Johnson would have cruised to a decision victory.

If Moises can’t get the fight to the mat, he might be in trouble.

Turner has an excellent vocabulary of strikes in his arsenal and manages distance effectively. It’s rare that you see a 6’3 lightweight, so he’s used to fighting opponents much smaller than him.

Turner has a brown belt in BJJ, but he does not want Moises on top of him at any stage. He won’t be out of his depth on his back, but I could definitely the clock running down with Turner desperately trying to scramble his way to his feet.

Turner has a fast sprawl and decent first layer takedown defense, but can be grounded if you wrestle persistently or time the perfect entry.

When comparing the physical attributes of both fighter, Moises has the advantage in terms of durability and cardio.

This could look like an embarrassing pick in hindsight, but I’m taking Jalin Turner to come through as the +145 underdog.

Chechnya produces some of the most ferocious fighters on the planet, and Zelim Imadaev is no exception.

I actually bet Imadaev in his last fight, thinking that his relentless pressure would eventually break Danny Roberts – but he was eventually caught and melted by a blistering hook from the Englishman.

Lots of pressure would seem to be the desired approach against Michel Pereira (who needs space to manoeuvre). However, the Chechen needs to be more defensively minded when he’s coming forward.

Imadaev seems like a natural fighter that doesn’t mind taking one to give one. I could see him cutting off the octagon and blasting the Brazilian with hooks in the pocket – but I also wouldn’t be surprised if he walked himself onto a thunderous right cross or flying knee either.

While Pereira is known for his wild acrobatics, the guy can fight technically if he wants to. The Brazilian is a proven finisher and will find opportunities to land power shots on an opponent that attacks with reckless abandon.

If you managed to play Zelim Imadaev in the +130 range, I think you made a decent bet because I do favor him slightly. I don’t think there is value on either fighter at pick ’em odds.

I made a stack of cash live betting Devin Clark against Alonzo Menifield after the first round.

As a fast twitch power puncher, it seemed likely that Menifield would fade once he was dragged into deep waters – and that’s exactly what happened.

I don’t want to discredit Menifield’s skills. He throws deadly combinations with his hands and has stellar takedown defense, but his gas tank will always be a concern for me.

Ovince Saint Preux is a fast twitch athlete as well, but we’ve seen him fight through exhaustion and finish opponents in rounds two and three.

I wouldn’t say that Saint Preux is the most fundamentally sound striker, but he’s an awkward and rangy southpaw that can hit you with shots from weird angles. He also pack a punch and carries his power late into fights.

While I think this fight probably remains standing, Saint Preux is considerably more talented on the mat and has finished four of his UFC opponents with his trademark Von Flu choke.

I don’t think this is a great fight to bet, but I would take the plus money on Ovince Saint Preux if I was forced to choose a side.

I’ll be interested to see where Karol Rosa’s ceiling is in the UFC.

The Brazilian is a proficient Muay Thai striker. She likes to punctuate her combinations with low kicks and is effective in the clinch as well.

As you may expect from a training partner of Jessica Andrade, Rosa is not defensively minded. Her boxing defense is particularly dreadful and she leaves her chin sky high.

She’s performed well against a certain level of competition, but I suspect she will get a rude awakening against top tier bantamweights.

I don’t have a solid read on her grappling. She didn’t look very adept on the mat in a regional fight against Melissa Gatto, but a lot can change in a couple of years – especially when you’re still in your mid-twenties.

Sijara Eubanks comes from a BJJ background and her top game is her best attribute as a mixed martial artist. She mixes her grappling with her ground strikes effectively and has a good variety of takedowns in her arsenal.

On the feet, Eubanks has developed some sharp technical boxing under the tutelage of Mark Henry. She has a bit of power in her right hand (at least early in the fight) and I think she’ll find plenty of opportunities to land flush shots on the chin of Rosa.

I wouldn’t say Eubanks has full blown cardio issues, but she’s definitely a front runner. This will mean she’ll have to measure risk and reward with her offensive wrestling – because she doesn’t want to run the risk of depleting herself early and getting out-hustled late (like in her fight with Bethe Correia).

This is a tough fight to call. I’ll side with Karol Rosa because of her work rate and conditioning, but I would need plus money to consider betting her.

Skill for skill, there is nothing remarkable about Augusto Sakai. He’s a competent Muay Thai striker with powerful combinations and chopping low kicks, but he doesn’t do anything extraordinary.

Sakai’s best attributes are his durability and cardio. He can go hard for three rounds, which is impressive for a huge heavyweight that doesn’t have the most athletic physique.

We don’t know much about his ground game, although glimpses from his fight with Blagoi Ivanov suggest that it isn’t great. We would have learned a lot more if the Brazilian didn’t stop a takedown in round three with an outrageous fence grab – which likely prevented him from losing a decision.

One would assume the smaller octagon favors Sakai, since he will be the one moving forward and pressuring. If the Brazilian gets forced into a chess match at distance, I struggle to see him winning that style of fight against a top notch sniper like Alistair Overeem.

When it comes to making reads and capitalizing on openings, Overeem is the best in the business. His shot selection is magnificent and he can look supernatural when starching opponents with blows that they didn’t see coming.

Because of his legendary striking acumen, people sleep on Overeem’s ground skills.

If you give him the opportunity, “Demolition Man” will establish a dominant position, control your wrist and hammer your cranium into the abyss.

It will be interesting to see what type of approach Overeem takes. At 40-years-of-age, he will be at a cardio disadvantage, but wrestling his way to top position would leave him with a great chance of finishing the fight.

If he blows his gas tank by grappling hard with no reward, he’s likely to get knocked unconscious.

As everyone knows, Overeem’s biggest liability is his chin and he’s taking on an opponent that will be tough to put away.

I can see why so much early money came in on the underdog, but I can’t help but think this is a good stylistic match-up for Alistair Overeem. If the Dutch striker gets close to pick ’em odds, I may have to pull the trigger.

At the time of writing (Thursday evening), I have 2 bets available with MMA Oddsbreaker Premium. One has value, the other does not.