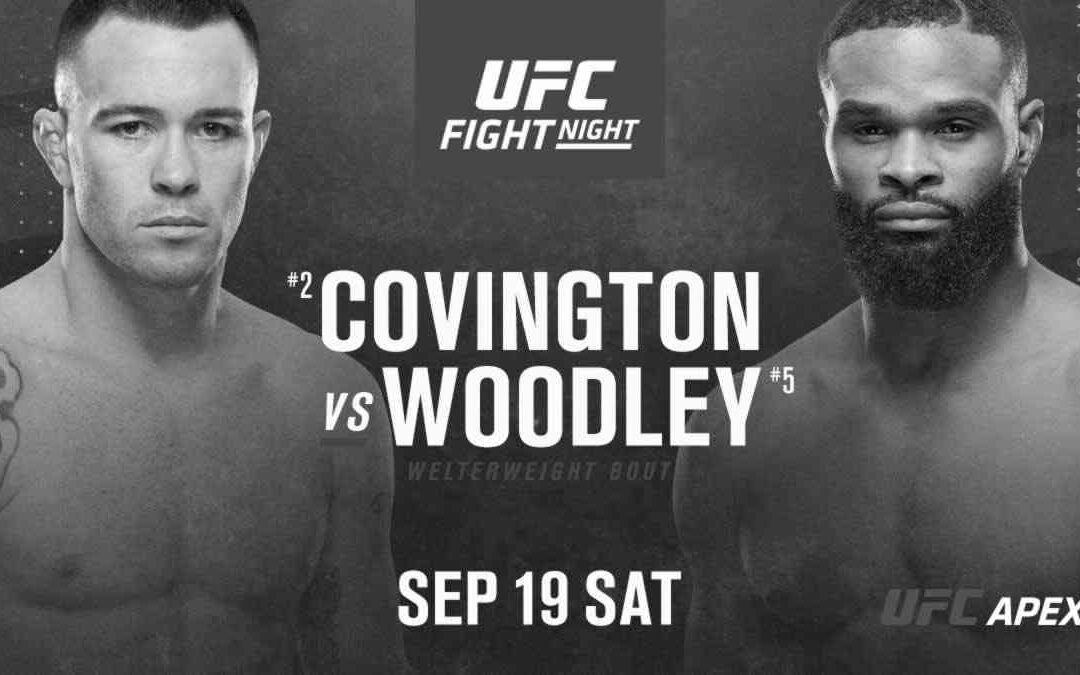 I’m on a terrible run of form. I’m stressed out with moving house so I’m going to keep my action light for the next few weeks until I’m able to get my head down and focus in my new place.

Here are my main card UFC picks for Fight Night 178.

If Kevin Holland can continue fighting intelligently, he could become a real contender at either middleweight or welterweight. Given that he walks around at 187 pounds, welterweight is probably the better option for him.

Standing 6’3 with an 81-inch reach, “Trail Blazer” is an excellent long range striker with clean straight punches and a variety of kicks in his arsenal.

Unlike most fighters that are tall for their divisions, Holland is not incompetent at fighting on the inside. He slips and rolls with punches excellently and has a dangerous clinch game.

He lacks a bit of physicality at middleweight and can be taken down, but his BJJ skills are often good enough to get him out of trouble when that does happen.

The big problem for Holland is his clownish behavior and lack of a fully functioning brain.

He often makes inexplicable decisions in the cage, such as taking down Brendan Allen in a fight he was dominating on the feet and getting submitted. Despite his brilliant skill set, the guy is as untrustworthy as you can get.

He does appear to have a favorable match-up against a shorter, more compact and less dynamic striker in Darren Stewart.

While he lacks a bit of finesse, Stewart is tough as nails and can crack. He has a good right cross, thudding leg kicks and nasty elbows in the clinch.

Unfortunately for “The Dentist”, I think he’s going to struggle with the 7-inch reach disadvantage and volume differential.

Stewart lands 2.97 significant strikes per minute, which puts him far behind Holland at 4.65.

I could see Stewart having success if he’s able to compromise the lead leg of Holland, or perhaps do something he never does and score takedowns.

Stewart might be a bit shorter, but he’s a full sized middleweight that should be much heavier than his opponent after re-hydrating. He’d be wise to fight in a way that makes his weight advantage pay.

I feel like Kevin Holland probably wins this fight, but I see no value on his -250 moneyline.

This is a highly intriguing match-up and you can make a case for both fighters.

We’re probably not going to see much evolution in her game at 35-years-of-age, particularly in this fight since her camp was severely disrupted due to the pandemic.

Markos gets much of her training done across the border in Michigan, but travelling wasn’t possible for her in this camp. It sounds like most of her training was done at her small gym in Canada and her wrestling coach won’t be in her corner.

Facing a BJJ specialist, Markos’ path to victory is obvious. She must defend the takedowns at all costs and land the cleaner shots on the feet.

Despite her high school wrestling background, Markos has conceded plenty of takedowns throughout her career – and not always against good wrestlers.

Against a pure grappler in Ashley Yoder, Markos blitzed forward throwing punches and was caught by a beautiful reactive double leg. If she makes a similar mistake in this fight, there’s a high chance that she’s forced to tap.

I expect Markos to come out with a hunched stance, just like in her fight with Claudia Gadelha. This will make it easier for her to sprawl, but she may perform tentatively with the knowledge that a single conceded takedown could cost her the fight.

Conversely, Mackenzie Dern is free to throw all caution to the wind. Her ground game is at such a high level that she won’t care if she winds up on her back, which gives her more freedom to operate on the feet.

Dern’s takedown accuracy sits at 7%, which is as bad as it gets. Her takedown entries are poorly timed, although she does have a bit of judo in her back pocket.

If Dern can secure the clinch (the octagon is small and Markos lacks power), she could potentially hit a judo toss like in her fight against Hannah Cifers.

If you’re seeing value on Markos at +140, you’d need to be confident in her definitively winning the striking exchanges – and I’m not seeing it personally.

I know Dern looked miserably raw against Amanda Ribas, but she hasn’t been training MMA for long and is still a developing fighter at 27-years-of-age. I thought her hands looked sharper against Cifers than they did against Ribas.

Having worked with a world class striking coach in Jason Parillo for the past four weeks, I don’t think it would be unreasonable to expect improvements on the feet. Markos has serviceable boxing, but she is not a world class striker.

I see multiple paths to victory for Mackenzie Dern and I think there is some value on her at -165.

I’ve been critical of Johnny Walker in the past and I’m not about to change my tune.

The Brazilian has plenty of charisma and is an explosive finisher, but he won’t be a real contender unless he fixes some shortcomings.

Starching opponents in round one with spinning back fists and flying knees is all well and good, but I don’t see a lot of depth to his game.

He’s very open defensively, has a questionable chin, struggles to defend takedowns and gasses whenever he can’t end the fight early.

It sounds like he’s made a home at SBG Ireland in order to refine his fundamentals, but is that the wisest choice? I could see him making big improvements at somewhere like Kings MMA, where controlled aggression would be the ethos.

I feel that Ryan Spann is the more complete martial artist. He has sharp boxing, smooth grappling and a lethal guillotine.

The main problem for Spann is that he’s a bit chinny and can slow down in fights, as we saw against Sam Alvey (albeit Alvey is a tough guy to look good against).

Still, I can see Spann landing the right cross on an opponent that leaves his chin sky high or potentially getting his grind on for three rounds (we just saw Walker lose this way against Nikita Krylov).

Spann trains under a master strategist in Sayif Saud, so you know there will be a smart game plan in place to avoid the early onslaught.

He might get wiped out in the first few minutes, but I see some value on Ryan Spann at +105.

How shot is Donald Cerrone? We’re about to find out.

“Cowboy” has had a long, decorated career and is slowing down at 37-years-of-age, but this is a winnable fight for him.

He’s the far more technical Muay Thai striker and will be facing an opponent that has shown a susceptibility to both counters and low kicks.

If he can get the fight to the mat, Cerrone should have a huge advantage there too.

Despite dropping his last four fights, he looked good against Anthony Pettis and should have gotten the decision on the scorecards. That said, he did absorb some clean punches to the head in that contest and he can’t afford to do the same against a heavy puncher like Niko Price.

Reminiscent of a certain heavyweight fighter, Price has gotten out of bad spots time and time again thanks to his insane knockout power. His obliteration of Randy Brown with hammer fists from bottom position remains one of the craziest knockouts in UFC history.

“The Hybrid” is second best in terms of skills, but that’s usually the case for him. He’s not going to defeat Cerrone with finesse and talent, but he might be tough enough to take a beating before finishing the fight with an atomic right hand.

Your heart will be in your throat if you’re betting Donald Cerrone, but I have to side with him as the +135 underdog.

While Khamzat Chimaev has benefited from two favorable match-ups in his short UFC career, the Chechen prospect has looked seriously impressive.

A life-long wrestler, Chimaev will slam opponents to the mat, make them carry his body weight, control their wrists and pound them into oblivion.

Much like Khabib Nurmagomedov, Chimaev will use the fence to keep opponents ensnared in his spider’s web.

We don’t have full insights into the rest of his game. His boxing looks serviceable and he scored an incredible uppercut knockout on the regional circuit – although I can’t imagine he’ll have to rely on his striking in this fight.

Likewise, we don’t know how his cardio will hold up if he’s dragged into deep waters. Against a non-athlete like Gerald Meerschaert, we probably won’t have that question answered.

A grappler first and foremost, most of Meerschaert’s fights look weird and sloppy. He’s very loose positionally and he’s the only fighter I can think of that will intentionally let opponents mount him because he’s so confident in his sweeping abilities.

Meerschaert doesn’t mind giving away rounds because he’s always ready to sink a choke as soon as his opponent makes a critical error.

Those are some terrible tendencies to have against a strong top control wrestler with superb ground strikes.

Meerschaert is probably the more technical striker. He’s developed a good left hand and left body kick under the tutelage of Duke Roufus, but his lack of speed and athleticism have always been a hindrance to him.

Outside of a flash KO, I just don’t think Meerschaert will be able to utilize his striking advantage (if he actually does have one) and it’s hard to see him scoring an opportunistic submission either.

I feel like the value is on Khamzat Chimaev to win inside the distance at -175.

I’m pissed off this fight is happening after Tyron Woodley is coming off two awful back-to-back losses. The first time this match was scheduled, I was planning on dropping multiple units on Colby Covington at plus money – but now he’s sitting at the heinous price of -350!

At his best, Woodley was a ferocious counter-striker with tremendous power in his right hand. He got away with a low volume approach because opponents had to fear the right hand when they closed the distance on him.

In his last few performances, Woodley hasn’t been able to pull the trigger. While there is no shame in losing to Gilbert Burns or Kamaru Usman, Father Time can’t be beaten and Woodley is getting a bit long in the tooth at 38-years-of-age.

Covington lacks power and is hittable in open space, so there’s a chance he gets knocked out early. However, if he’s able to close the distance and keep the fight in the clinch (where Woodley can’t generate full power with his right hand), this fight is going to look like a mismatch.

“Chaos” has ridiculous cardio and won’t stop producing output for five rounds. If Woodley is forced to work consistently in the clinch instead of in bursts, he’s going to be exhausted before we see the championship rounds.

I’m confident that Colby Covington cruises to victory and there might be value on his -140 decision line.