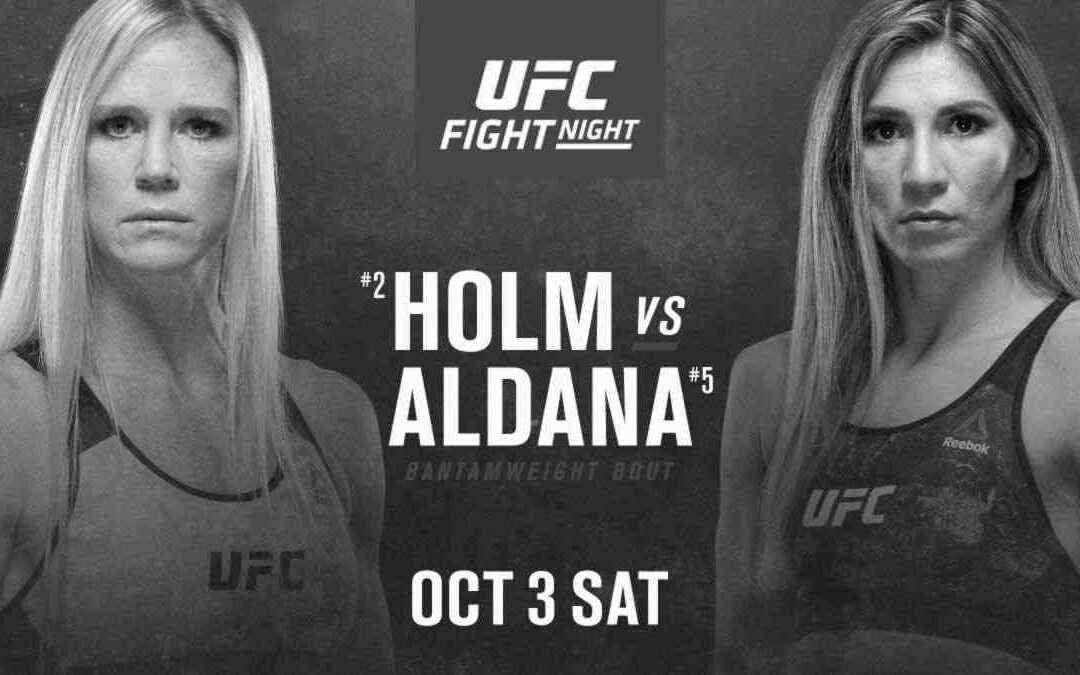 I’m waiting for broadband to be installed in my apartment, so content is going to be a bit sparse at the moment. I did have time to dive into this weekend’s main event fight between Holly Holm and Irene Aldana, which will be pivotal for the women’s bantamweight division.

Renowned for her legendary knockout of Ronda Rousey, it’s a sure thing that Holly Holm will be inducted into The UFC’s Hall of Fame when her career is over.

At nearly 39-years-of-age, “The Preacher’s Daughter” is making a final run for the title.

I assume Holm’s game plan will be to avoid trading hands with a more powerful boxer. I expect her to move light on her feet, fire plenty of kicks with her lead leg and drag the fight into the clinch whenever her opponent moves into punching range.

Holm isn’t afraid of putting on an ugly fight – so long as she gets her hand raised at the end!

She showcased her freakish strength in her last fight when she was able to hold Raquel Pennington against the fence for extended periods. It was weird that Pennington voluntarily entered the clinch at times, because she was landing punches on Holm in open space.

I feel Holm’s striking might be on the decline. Agile counter-strikers don’t tend to grow old well and many fighters around her age have problems pulling the trigger.

Still, her fight IQ is excellent and she knows how to win rounds. We saw her defeat Megan Anderson with takedowns and positional control, so don’t be surprised if the decorated kickboxer does her best impression of an NCAA wrestler once again.

Mexican fighters are known for their grit and aggression, and Irene Aldana is no exception.

A boxing-centric striker, “Robles” throws clean combinations and can fight effectively off the front and back foot. She absorbs a lot of damage and is susceptible to counters, but she mainly gets tagged up by opponents who’re prepared to fight fire with fire (i.e. not Holm).

Aldana throws at a high clip and I doubt she will have a problem fighting hard for five rounds. Both ladies train at altitude, which should help with their conditioning.

We know that judges prefer punches to the head compared to kicks to the body and legs. Aldana has the heavier hands, so I expect the optics to favor her (even if the striking statistics don’t).

I don’t think Aldana is going to have a problem closing the distance (since Holm doesn’t have power in her straight shots), but the big task for her is staying off the fence and keeping the fight upright.

Aldana’s first layer takedown defense is pretty good and she can threaten with submissions on the mat, but I think she could be susceptible to giving away minutes in bottom position.

At 32-years-of-age, Aldana is in her fighting prime and has made it clear she wants to face Amanda Nunes in the near future.

You can make a case for both fighters.

If Holm wins, the fight is likely to be a mundane affair, with plenty of cage pushing and pitter-patter exchanges in open space. The fight is going to be much more exciting if Aldana wins!

Personally, I like the plus money on the Mexican fighter.

So long as she doesn’t get caught by Holm’s legendary head kick, I think the Aldana will push forward relentlessly and land the more impactful shots in open space.