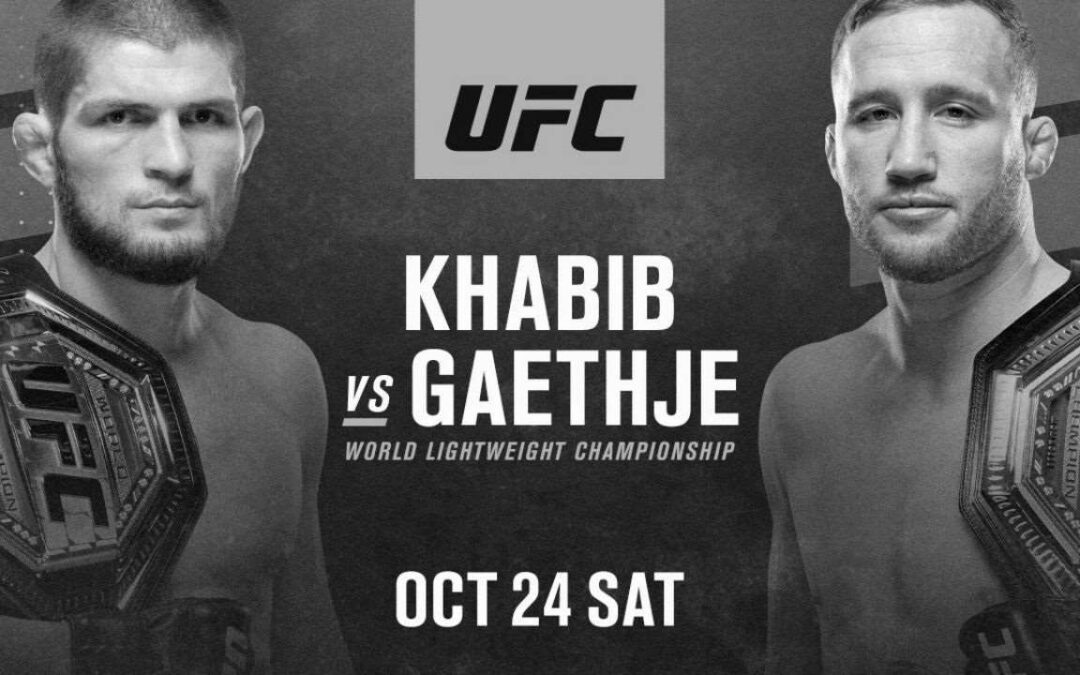 We’re heading back to Fight Island for an incredible fight card. UFC 254 is stacked from top to bottom and features a lightweight title fight between Khabib Nurmagomedov and Justin Gaethje.

As always, here are my UFC picks for the main card from a betting perspective.

With Jan Blachowicz winning the light heavyweight title last month, the division is now wide open for the top contenders to make their claim at the belt.

I’ve been thoroughly impressed by Magomed Ankalaev and I think we’re going to see him in a title fight sooner rather than later.

The Dagestani fighter comes from a sambo background and is tremendously well-rounded. He can get caught with his hands low in the pocket, but I’m clutching at straws when trying to point out weaknesses in his game.

Interestingly, he likes to fight in the opposite stance of his opponent – thus he’ll probably come out southpaw as he did in the first encounter with Ion Cutelaba. As we saw in that brief contest, left kicks should be there for Ankalaev all day against an opponent who will be looking to close the distance and land the kill shot.

Cutelaba is capable of knocking anyone out, but I think he needs to get the finish in round one. Historically, we’ve seen the Moldovan slow down and wilt when the fight isn’t going his way.

Additionally, Cutelaba comes from a Greco-Roman wrestling background and seems susceptible to lower body takedowns. If Ankalaev can secure top position, he has some of the nastiest ground strikes in the game and I’m sure he get Cutelaba out of there (check out his regional fight against Wager Prado for reference).

I don’t mind the juice on Magomed Ankalaev here. I’m riding with him all the way to the championship.

With all due respect, I’m pretty underwhelmed by the footage I’ve seen of Liliya Shakirova. The Uzbek fighter looks undersized for a flyweight and has primarily fought lower tier competition over in Russia.

Shakirova isn’t the most fluid striker, although she does have a serviceable top game. That said, I think she’s going to struggle to hit takedowns on a very physical opponent like Lauren Murphy who is notoriously strong in the clinch.

Murphy isn’t a world beater by any means, but she looks to have made improvements since she left The MMA Lab and started training at a smaller gym where she gets more personal attention.

I feel that Murphy has a significant boxing advantage and can likely land counters on a more rudimentary opponent.

If Murphy wants to take the fight to the mat, that could also be an option for her. We saw her score takedowns on Andrea Lee to put her stamp on rounds and I could see her doing something similar in this fight.

I never thought I’d say this, but Lauren Murphy deserves to be a solid favorite in my eyes.

With freakish athleticism and strong wrestling credentials, Phil Hawes has the ingredients to become an elite UFC fighter. He also trains under Henri Hooft at a gym with plenty of skilled strikers, so I expect that part of his game to be improving as well.

While Hawes probably has a high ceiling, I don’t completely trust him. His striking is still a bit wild and he doesn’t pace himself intelligently. Offensive wrestling costs a lot of energy and we’ve seen him slow down in the past (particularly in his Contender Series fight against Julian Marquez).

I think Hawes can probably get his wrestling going early in this contest, but whether he can rinse and repeat with takedowns for three rounds remains to be seen (if he doesn’t get a first round stoppage).

Jacob Malkoun is the far more refined boxer and I would certainly favor him if he can keep the fight standing. However, he doesn’t have the same athleticism or power as his opponent.

Malkoun is fortunate enough to train with Robert Whittaker, which is a great look for a developing fighter. His offensive wrestling looks solid, as does his ground game, but we don’t really have insights into his takedown defense.

The wrestling and athleticism disadvantage might be too much to overcome, but I definitely think Jacob Malkoun is the value side at +220.

Fighting from the southpaw stance, Walt Harris carries thunderous power in his left hand and throws ferocious boxing combinations on the inside. While not much of a kicker, he does attack with a thudding left body kick against orthodox opponents.

Harris has scored some spectacular knockouts in the first round, but he’s clearly a bit of a front runner. When he can’t put opponents away early, his output tends to wane.

I expect Harris to come out all guns blazing against Alexander Volkov, because there is a distinct possibility that he gets out-hustled and picked apart at distance if he can’t end the fight quickly.

Volkov has an excellent vocabulary of strikes in his arsenal and is great at maintaining distance. Although the physical attributes of both fighters are similar, Volkov is the more technical out-fighter and can land at a high clip for three rounds.

If he doesn’t get starched in the first few minutes, I believe this is Alexander Volkov’s fight to lose.

It’s crazy to think that Jared Cannonier once competed as a heavyweight, because he’s put in the best performances of his career since dropping to the middleweight division.

Cannonier doesn’t have the most exciting repertoire of strikes, but you can go a long way with a powerful right hand and devastating low kicks. Cannonier’s takedown defense has also improved significantly in recent years (although it probably won’t be needed this weekend).

It’s all well and good beating David Branch, Jack Hermansson and an ancient version of Anderson Silva, but this is a completely different test for “The Killa Gorilla”.

Robert Whittaker is one of the most cerebral fighters in the game. He’s excellent at moving in and out of distance and can walk opponents onto shots that they didn’t see coming.

“The Reaper” throws crisp straight punches and brings a variety of kicks from his traditional martial arts background.

I feel that Robert Whittaker is the more polished and technical striker, but I’d need his price to reach +120 or thereabouts to consider betting him.

Much to everyone’s amazement, Justin Gaethje turned out the best performance of his career when he blasted Tony Ferguson with leg kicks and sharp counters to take the interim lightweight belt back in May.

It’s great to see Gaethje transition from crazy brawler to elite technician, because he’s going to need to be composed and strategic in order to emerge victorious this weekend.

Investing in low kicks will be crucial for Gaethje and he needs to apply pressure.

As we know, Khabib Nurmagomedov’s best takedowns come against the fence and most of his opponents allow themselves to get backed up because they’re so terrified of the takedown threat.

Gaethje is renowned as an aggressive fighter and he has a far better chance of stuffing takedowns if he can keep the fight as close to the center of the octagon as possible.

It’s hard to ascertain Gaethje’s takedown defense, since he’s primarily fought strikers in the UFC, but he does have an NCAA Division 1 All-American wrestling pedigree to rely on.

I did manage to find this compilation video of Gaethje stuffing takedowns, although most of the footage is from years ago when he fought in World Series of Fighting.

Nurmagomedov is 28-0 for a reason and he’s been able to make good wrestlers look foolish. He’s undoubtedly the best cage wrestler in the history of the sport and the way he mixes in his ground strikes with his top control is otherworldly.

Seeing top tier opponents get their wrists and legs trapped while getting pulverized is anxiety-inducing to watch and it reminds me a lot of my experience working in an open plan office as a corporate employee.

Nurmagomedov’s striking is nothing to write home about, but the takedown threat allows him to land cleanly on superior strikers. Still, “The Eagle” does not want to play around on the feet in this contest and getting the fight to the mat will be imperative for him.

I can’t blame anyone for taking a gamble on Justin Gaethje at +270, but I wish there was more recent footage of his takedown defense and get up game to make an informed decision.