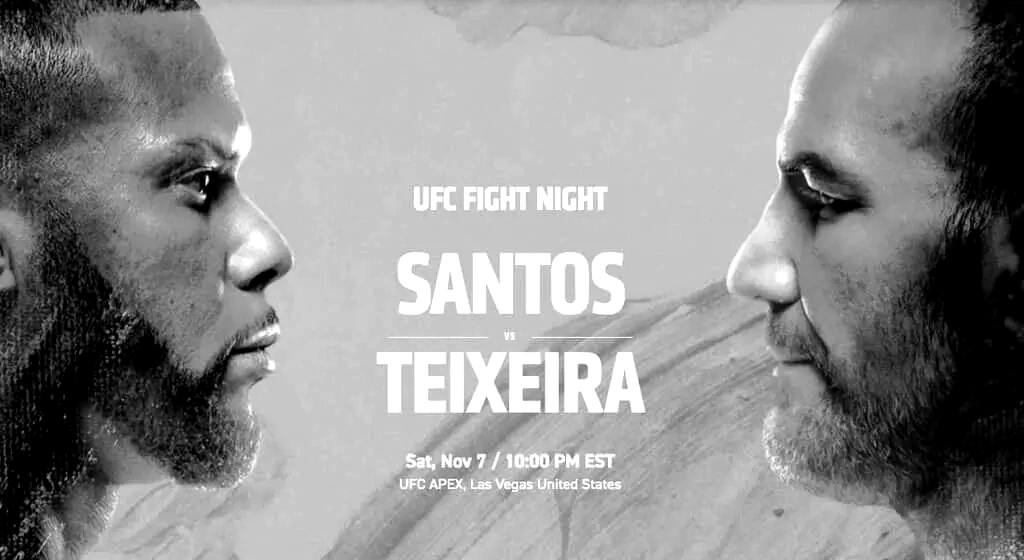 UFC Fight Night 182 looks like an entertaining fight card and the main event features a pivotal light heavyweight clash between Thiago Santos and Glover Teixeira. Here are my UFC picks for the main card.

A high volume and aggressive striker, Yan Xiaonan is undefeated in her UFC tenure and is now on the cusp of a title shot. Coming from a Sanda background, the Chinese fighter throws powerful combinations with her hands and is particularly effective with kicks from her lead leg.

I wonder if she will be as kick heavy in her approach this weekend, because a caught kick could easily be converted into a takedown?

While she hasn’t faced the best competition, Xiaonan has looked dominant in all of her fights except for her decision victory over Angela Hill – which was razor close.

Because she’s primarily fought strikers, we don’t have a lot of information when it comes to the Chinese fighter’s takedown defense and ground game.

Against Kailin Curran, Xiaonan showed a lack of urgency getting back to her feet after conceding takedowns – and that could be a major problem against an opponent who will be seeking to take her down and hold her down at all costs.

Claudia Gadelha’s career has plateaued in recent years. Her grappling is as legitimate as you can get, but her cardio problems force her to measure risk and reward with shooting takedowns.

That said, two takedowns (or potentially just one) could seal the fight for her.

The Brazilian possesses some solid boxing and she’s not a sitting duck on the feet, but she doesn’t want to get caught in a striking battle with a faster, more dynamic opponent.

I feel the value is probably with Claudia Gadelha at +140, but I’m not sure if I can bring myself to pull the trigger given her cardio issues.

Everyone knows what Brendan Allen is seeking to do when he steps inside that octagon. He wants to punch his way into the clinch, drag you to the mat and beat you to a pulp or choke you out.

While he can lose positions while chasing for submissions, Allen is a skilled grappler and he blends his ground strikes fluently with his BJJ game.

We’ve seen opponents make critical errors when facing him. I know pressure forces fighters to make mistakes, but Kyle Daukaus, Kevin Holland and Tom Breese all tried to grapple with him when they didn’t need to.

Sooner or later, we’re going to see an opponent stand up to Allen’s bullying style and hold their own in the grappling department.

It could happen this weekend.

Ian Heinisch isn’t the most refined striker, but his chopping low kicks and deadly overhand makes him a threat against Allen – who is particularly vulnerable defensively when he’s closing the distance with his head stationary.

Heinisch will be the best wrestler that Allen has faced and if he does get taken down, he scrambles excellently and it’s difficult to establish a dominant position on him.

I anticipate this to be a brutal war of attrition, and I like Ian Heinisch’s chances in that type of fight.

I’m not going to spend too long on this fight because the dynamics at play are fairly obvious for anyone who has watched footage of both fighters.

Khalid Taha is a skilled striker with a plethora of weapons at range and a dangerous clinch game, but the young German cannot stuff a takedown to save his life.

We saw him get out-grappled by Nad Narimani (although that was up a division at featherweight) and he also conceded a takedown against an undersized bantamweight in Bruno Silva.

While Taha will be able to administer damage whenever the fight stays standing, he’s facing an extremely well-rounded opponent that has an extensive background in wrestling and BJJ.

Raoni Barcelos has decent boxing and can hold his own on the feet, but he should be able to take the fight to the floor whenever he desires.

Taha doesn’t seem competent off his back and unless he’s dramatically improved during his lengthy PED suspension, he’s in deep trouble this weekend.

I can’t stomach playing -350 for Raoni Barcelos, but he should roll pretty comfortably.

Unpretentiousness is the trait I admire most in people, and Tanner Boser has it in spades. With a mullet haircut, a missing tooth and a hardcore attitude, Boser is exactly the type of dude I can get behind as a fan.

Coming from a karate background, Boser moves light on his feet and fights well out of both stances. His low kicks are his main attacks and he has a devastating overhand that can put opponents to sleep.

The Canadian is much younger and faster than his opponent, but even at 41-years-of-age, Andrei Arlovski is no pushover.

While less dynamic on the feet, Arlovski should have the advantage in terms of pure boxing ability. Whether he’ll be able to use his footwork and reach against an opponent that will be seeking to decimate his lead leg remains to be seen.

It’s obvious to see why Tanner Boser is the favorite, but -300 feels wide to me. There might be some value on the fight going to decision at -115.

While undoubtedly a gifted athlete, “Marreta” is now 36-years-of-age and needs to make his title bid sooner rather than later. A win this weekend will likely see him face the winner of Israel Adesanya and Jan Blachowicz next year.

Santos is an explosive kicker and should have a significant advantage if this fight stays at distance. While not the most technical boxer, he throws punches with venom and can counter while moving backwards.

In his fight against Eryk Anders, we saw that Santos can deal with a tenacious grappling onslaught, but he’ll be facing a completely different level of grappler in Glover Teixiera.

At 41-years-of-age, Teixeira’s reflexes have slowed and his boxing looks a lot less smooth than it used to. That’s okay though, because Teixeira is an extremely well-rounded MMA grappler with good cardio for an older fighter.

Teixeira has good double and single leg takedowns in open space and chain-wrestles effectively against the fence. The Brazilian is a long-time BJJ black belt and one of the best back takers in the sport.

I think the plan for Teixeira will be to stay defensively sound for the first round or two, allow his opponent to expend some energy and then start wrestling tenaciously. While Santos has a BJJ black belt himself, it’s pretty obvious who will have the advantage if this fight hits the mat.

He might find himself on the wrong side of a highlight reel knockout, but I feel like the value is with Glover Teixeira at +210. I also think there is a bit of value on Teixeira by submission at +550.