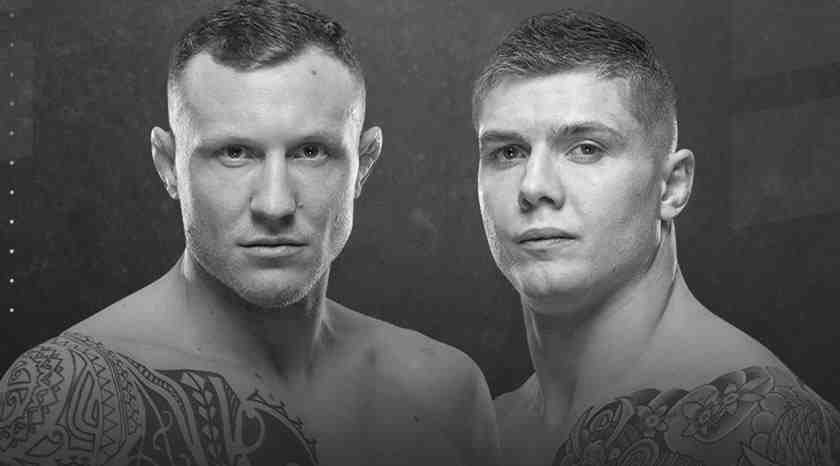 UFC Fight Night 185 is headlined by a pivotal clash in the middleweight division. Jack Hermansson takes on a surging Italian prospect in Marvin Vettori as both men look to work their way into title contention.

With a background in Greco-Roman wrestling, Jack Hermansson will be looking to take the fight to the mat as soon as possible. He has good takedowns from the clinch and shoots a decent double leg in open space as well.

The Scandinavian is a beast when he gets on top and has some of the most devastating strikes I’ve seen from the body triangle position. The guillotine is his most dangerous attack (and he sets it up brilliantly), although his leg locks are something you need to be aware of as well.

Hermansson is less comfortable on the feet and I don’t think he likes being hit. His two best weapons are the jab and calf kick, and I don’t think that’s a good recipe against a skilled southpaw striker that can punish you for any wrong moves.

I feel that Marvin Vettori’s lead right hook, left body kick and left cross (particularly as a counter to Hermansson’s jab) will all be effective here. One of Vettori’s main training partners is Sean Strickland, so getting the jab pumped in his face shouldn’t be anything new to him.

What I really like about Vettori is his grittiness and forward pressure. He’s at a reach disadvantage, but I expect him to close the distance effectively and the smaller octagon should play to his benefit.

The Italian fighter is as strong as an ox and has good takedown defense, but he’s not out of his depth on the mat.

Before moving from Italy to train at Kings MMA, Vettori relied on his grappling far more in his fights and he has a brown belt in BJJ.

I think Vettori is a good enough scrambler to get out of trouble if he does wind up on bottom and could inflict major damage or get the finish if he gets on top.

I feel that Hermansson has the advantage in terms of cardio, and he may be forced to weather an early storm and take over in the later rounds. That said, he hasn’t fared well in the past against skilled strikers that he hasn’t been able to take down – and Vettori fits that description.

I like this fight for Marvin Vettori and feel there is plenty of value on him as a slight favorite.

Ovince Saint Preux is tough to get a read on, mainly because he’s terrible at winning rounds but is capable of finishing fights at any second.

Having spent the majority of his career at a smaller gym, Saint Preux never developed into the most fundamentally sound combatant – but his explosiveness and unpredictability makes him dangerous against all opponents.

I feel that Saint Preux is out-gunned on the feet. While he could always land a kill shot, he’s at a speed disadvantage and will likely struggle to keep up with his opponent’s workrate.

Furthermore, we saw him eat countless left hands against another southpaw striker in Michał Oleksiejczuk and that’s exactly what he has to watch out for in this match-up.

If Saint Preux is to emerge victorious, he probably needs to get the fight to the mat. He isn’t the best wrestler, but he’s capable of choking anyone unconscious if you give him half a chance.

While somewhat raw as a prospect, I love the clean straight punches and kicks to the body from Jamahal Hill. He leaves his chin a bit high (which will get him into trouble sooner rather than later), but I definitely give him the advantage if the fight stays standing.

Hill conceded numerous takedowns against a judo black belt in Darko Stosic earlier this year. He still won the fight convincingly, but a single conceded takedown against Saint Preux this weekend could be a death sentence.

I can’t gamble on Jamahal Hill’s defensive grappling at -175, but he looks like a promising talent and I favor him to win this fight.

Taking this fight on short notice, Montana De La Rosa will be looking to get back in the win column after dropping a decision to Viviane Araujo (a fighter who shares some commonalities with her opponent this weekend).

While De La Rosa throws a decent jab and right cross, she lacks power and seems to struggle with more dynamic strikers.

Her best performances come in fights where she has a wrestling/grappling advantage, and I don’t think she will in this contest.

Taila Santos is a powerful Muay Thai striker and I think she will find success with body kicks, low kicks and clinch attacks against De La Rosa.

While she looked underwhelming against Mara Borella, Santos performed far better against Molly McCann in her most recent outing – battering the British fighter on the feet and landing numerous takedowns as well.

So long as she can stay off her back, I think the physicality and dynamic attacks of Taila Santos should win her this fight.

Georgia’s Roman Dolidze certainly looks the part of a UFC light heavyweight fighter, but I’m sceptical of where his ceiling lies.

Fighting out of his own gym in Odessa, Dolidze couldn’t have had an easier run of schedule on the Ukranian regional circuit in order to get into the UFC.

In one fight, he gets rocked by his opponent and the referee intervenes – giving him time to recover and clean his gumshield!

Knocking out Khadis Ibragimov in his UFC debut doesn’t tell us much, particularly since he was attempting to land a head kick as his opponent came forward and got caught with the knee.

At range, the Georgian has a decent jab and some stinging low kicks, but he mainly wants to goad opponents into engaging recklessly so he can blast them with counters. He’s blessed with power, so his strategy has worked out pretty well so far.

He also has some submission grappling credentials, although he doesn’t seem like much of a wrestler. If the fight hits the mat, it’s hard to predict what will transpire.

Dolidze has finished every opponent in his career thus far, but will be facing his first real test against the gritty and durable John Allan.

You can count on Allan to come forward and turn this into a dog fight. He’s somewhat limited at range, but fires ferocious combinations in the pocket and is dangerous in the clinch as well.

Allan will often punch his way into the clinch in order to secure a body lock takedown and he seems like a solid grappler when he’s the one in a dominant position. That said, his bottom game is questionable and he has numerous submission losses on his record.

Still, I feel like Allan has more coherence to his game than Dolidze and I love that he’s prepared to walk through fire in order to land combinations on the inside.

Most opponents seem terrified of Dolidze’s power, and I don’t think Allan will be.

This is a tough fight to handicap since I don’t have a complete read on either athlete. Based on the information available, I do feel that John Allan should be a slight favorite.

Nate Landwehr is an entertaining fighter, but I don’t think he’ll be a ranked featherweight any time soon.

He likes to come forward and throw hammers, but his head stays stationary when he attacks and he’s supremely hittable. Fans love to see a brawl, but you can’t survive by blocking punches with your face in the UFC.

Landwehr also comes from a wrestling background, but doesn’t have the best takedown defense.

With all things considered, Movsar Evloev is a terrible match-up for him.

The Russian fighter is a strong wrestler and is positionally sound on the mat. His boxing has also improved by leaps and bounds since his Russian regional fights from a couple of years ago.

He won’t struggle to hit the target with those straight punches down the pipe.

All in all, Movsar Evloev should cruise to victory and this is reflected in the price.