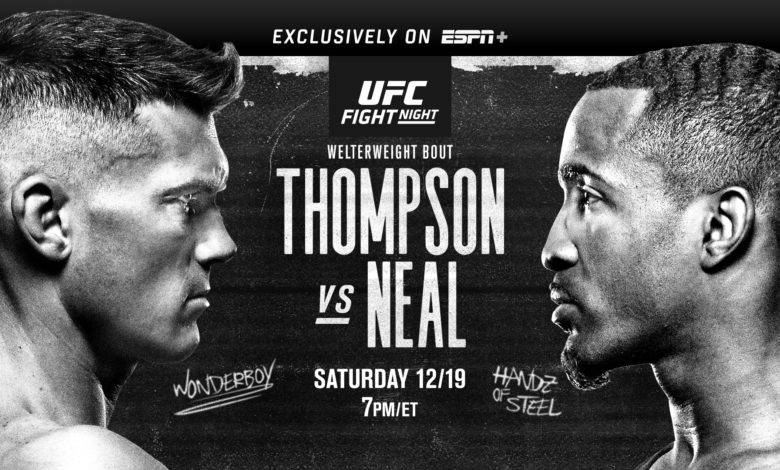 UFC on Vegas 17 is headlined by an epic welterweight clash between Stephen “Wonderboy” Thompson and surging contender, Geoff Neal. Overall, this is an exciting fight card and a great way to end the year.

Here are my predictions for the main card from a betting perspective.

As you’d expect from a fighter who took up MMA later in life, Greg Hardy is still a raw talent. He has powerful low kicks, a sharp jab and crushing right hand, but there is nothing remarkable about his game.

Of course, you don’t need to be an elite technician to have success in the heavyweight division. Hardy’s speed, athleticism and power will carry him far.

He’s been working closely with the great Rashad Evans, so I’d expect him to be making improvements from camp to camp.

That said, the biggest shortcomings we’ve seen with Hardy have been his ground game and cardio – both of which Marcin Tybura should look to exploit.

Heading into his fight with Ben Rothwell, I thought Tybura was on a hard decline and was about to get knocked unconscious yet again. The Polish veteran proved me wrong and turned out one of the best performances of his career!

Tybura prevented Rothwell from landing cleanly on him in the first round, and then took over as his opponent started to tire. A takedown in the third round solidified the fight and I’m sure he’ll want to utilize his BJJ black belt in this contest.

If he can avoid taking heavy punishment in round one and then start to lean on his grappling as the fight goes late, that would seem like a smart strategy against Hardy.

I don’t have a solid read on this fight, but I’ll side with the more skilled combatant in Marcin Tybura if you’re giving me plus money.

Training out of American Top Team, Gillian Robertson is not one of the most well-rounded fighters in the strawweight division.

The Canadian is awkward on the feet and hates being hit, but she usually finds a way to get the fight to the mat by hook or by crook. She has good timing on her takedown entries and is always looking to catch a kick in order to ground her opponent.

I’m not sure if she’ll be able to add another submission to her record this weekend, but she definitely has the skills to land takedowns and burn the clock while she rides out rounds in top position.

On the feet, Taila Santos will dominate at any range. Her body kicks and straight punches should cause damage in open space and she’s effective with the Thai clinch as well.

The Brazilian has a good body lock takedown and is savvy on the mat, although I expect the game plan will be to keep the fight vertical by any means necessary.

Santos gave away the first round on bottom position against a strong judoka in Mara Borella, and that seems to be the risk here.

I could see a scenario where Santos is winning on the feet and then gets hits with a reactive takedown out of nowhere and drops the round. The possibility of getting a kick caught is also real, and she might be wise to adopt a boxing-centric approach for that reason.

Still, Santos is the superior athlete and packs far more firepower. I could see her marching forward and mowing down Robertson like Maycee Barber did in 2019.

I’m not overly confident, but I have to side with Taila Santos at pick ‘em odds. If you’re betting her, a small pseudo-hedge with Gillian Robertson’s decision line might be wise.

I’m not ready to write off Marlon Moraes just yet. He suffered rough knockout losses to Henry Cejudo and Cory Sandhagen, but those are two of the top bantamweights in the world.

Moraes is a lethal Muay Thai striker and is capable of slaying any contender instantaneously when one of his power shots lands cleanly.

Against a boxing stylist in Rob Font, I expect Moraes to try and keep the fight at kicking range.

Whether or not the Brazilian can get his low kicks going could be the deciding factor in the fight.

I expect Font to check kicks, counter with the straight right and apply pressure in order to force the kicker to fight off the back foot.

Look for Moraes to plant his feet and throw as hard as he can in order to hold his ground. If he can land flush and bring the timidity out of Font, this would be a huge feather in his cap.

We saw Font lose his composure after receiving one heavy blow from Pedro Munhoz and I don’t think he’s entirely comfortable with being hit. He had no issues walking down a low-powered striker in Sergio Pettis, but this is a completely different proposition.

That said, I love the clean combinations from Font and I feel like he has some of the best pure boxing in the division.

I could see this fight going either way, but I feel the value is with Rob Font as the +130 underdog.

As bettors, we know that the market tends to overrate early knockouts.

Khaos Willliams starched Alex Morono and Abdul Razak Alhassan in less than a minute combined, but sooner or later he’s going to have to fight through adversity.

He floored Alhassan with the cleanest right hand of his career, which could be an indicator that he’s making improvements. This is relevant because he primarily threw wild haymakers in his regional footage and his cardio looked suspicious as well.

Win or lose, I feel that we’re going to learn a lot about him this weekend, because he’s facing an opponent that will be difficult to put away.

After an emphatic knockout of Danny Roberts, Michel Pereira lost his second UFC fight in unimpressive fashion. He showed terrible fight IQ by wasting his energy with low percentage, flashy techniques and dropped a decision against a comically undersized opponent in Tristan Connelly.

Fortunately for Pereira, he doesn’t have to rely on crazy capoeira kicks and back flips – he’s actually a fundamentally sound kickboxer.

In a much more mature performance, he danced circles around Zelim Imadaev before finishing him in the third round.

If he relies on his footwork, low kicks, front kicks and straight punches, I feel he should dominate Williams from pillar to post.

Pereira also possesses a black belt in BJJ, so that could be another area for him to exploit.

I like Michel Pereira in this spot and I feel there is plenty of value on his -125 moneyline.

I think we can all agree that Jose Aldo is levels above Marlon Vera in terms of technical ability, but fights aren’t won on paper.

The former featherweight champion is looking shopworn at 34-years-of-age, but he’s performed admirably since dropping down to bantamweight.

He fought Marlon Moraes to a close decision and looked good against Petr Yan for the first three rounds (before imploding in the fourth).

Aldo can win this fight with barbaric leg kicks and sharp combinations to the head and body (I feel the body shots will be particularly useful in this fight). What concerns me is his inability to get out of the way of danger and his questionable gas tank.

Vera is not the most polished striker and doesn’t really wrestle, but his ability to walk through fire is otherworldly.

You can hit him as hard as you like, but the Ecuadorian will still march forward and inflict damage in the pocket and clinch. Such pressure could be extremely unpleasant for the Brazilian veteran (particularly in the third round).

I’m not sure how much value there is at -145, but I have to side with the more technical striker in Jose Aldo.

If you were to make a shortlist of the most sophisticated out-fighters in the UFC, Stephen Thompson would come to mind.

“Wonderboy” is one of the best examples of a traditional martial arts striker that took the time to evolve into a thoroughly well-rounded MMA competitor.

With swift footwork and a beautiful vocabulary of punches and kicks, Thompson is a unique riddle to solve.

At 37-years-of-age, I would expect him to start declining sooner rather than later, but I’d consider him as a world class welterweight until proven otherwise.

As a fighter that is so reliant on movement, I don’t think the small cage favors him.

Likewise, fighting with his hands low allows him to attack with unpredictable shots, but it leaves him wide open defensively if you’re able to close the distance on him.

Geoff Neal is much more fundamental in his approach. The southpaw keeps his chin tucked, hands high, and throws a devastating straight left with speed and precision.

Neal may not be as nuanced as his opponent, but his ability to crash the distance with explosive force could be the difference maker here.

Training under the legendary Sayif Saud, I’m sure there will be a smart game plan in place. I would anticipate Neal would rather force a fire fight and go out on his shield than get slowly picked apart at distance like so many of Thompson’s past victims.

I’ll side with Geoff Neal as an outright pick, but I feel the value is on the under 4.5 rounds prop at -145.