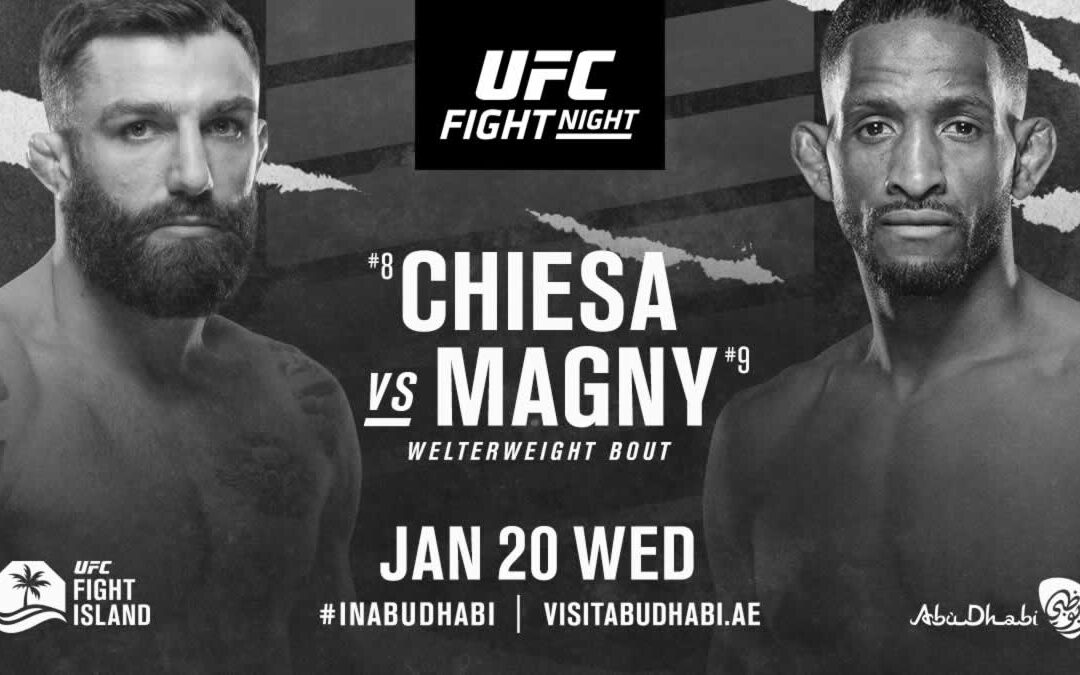 UFC Fight Island 8 is headlined by an exciting welterweight clash between Michael Chiesa and Neil Magny. Here are my main card UFC picks from a betting perspective.

At 35-years-of-age, I don’t think we’ll see any new wrinkles in the game of Douglas Silva de Andrade. He’s always been a hard-nosed kickboxer/brawler and I think he’ll finish off his career with more of the same.

The Brazilian likes to plant his feet and throw with venom. This can work when he has an opponent that will stand right in front of him, but he’s struggled with more nuanced strikers that are light on their feet.

I’m also not sold on his takedown defense. He was taken down pretty easily by Renan Barao and didn’t offer much off his back.

In fact, he could have been grounded for prolonged periods if the referee hadn’t stood the fighters up on two occasions.

I feel that Lerone Murphy has better footwork, is more athletic and possesses sharper boxing.

The British fighter could also opt to take the fight to the mat, should he wish to.

We saw him grapple with a renowned black belt in Ricardo Ramos and pound him out from top position, and I could envision a similar scenario in this fight.

I strongly favor Lerone Murphy and I can’t blame anyone for throwing him in a parlay.

Matt Schnell is a solid fighter with a well-rounded skill set.

He throws fluid combinations on the feet and should have a speed advantage. His tendency to brawl is a worry, but he’s perfectly capable of fighting technically when he wants to.

I don’t think he’ll be able to hit takedowns in this fight, but could pull guard in order to make something happen off his back.

The triangle is his most dangerous submission and he locks in the choke extremely quickly.

I would favor Schnell stylistically, but his chin is a huge liability. He’s suffered some bad knockout losses in his UFC tenure and gets rocked easily.

Tyson Nam doesn’t produce the same output as his opponent, but he makes his shots count. In addition to his devastating right cross, he also has a good left hook and uppercut.

We’ve seen fighters with elusive footwork give him problems, but he’ll likely get the fight that he wants on Wednesday.

The Hawaiian is a good defensive wrestler and is one of the few flyweights on the roster that can crack.

You can analyze this fight from a stylistic perspective if you want, but it probably comes down to the fact that one fighter has knockout power and the other has a weak chin. I feel Tyson Nam is the right side at -130.

Looking more like a librarian than a UFC fighter, Roxanne Modaferri consistently performs above expectations and racks up wins in the underdog role.

She was never the most gifted athlete and I doubt we’ll see any improvements at 38-years-of-age, but you can always rely on her to fight to her strengths and attempt to implement a grappling-heavy game plan.

This is wise because she’s always at a striking disadvantage, particularly in this bout.

Viviane Araujo is a skilled kickboxer with an excellent vocabulary of strikes in her arsenal and good footwork. Some may argue that her movement is a little excessive, because she tends to slow down in the later rounds.

Even if her output wanes, she should still win the striking exchanges.

The risk for Araujo is that she spends too much time with Modaferri lying on top of her, but I only see that happening if she gasses horrendously or does something idiotic such as getting reversed after shooting takedowns of her own.

Women’s MMA is notoriously high variance and I don’t usually like paying juice, but I feel like the -325 price tag is perfectly justified for Viviane Araujo.

You can hate all you want on this fight, but it’s going to be entertaining for as long as it lasts!

Both fighters have gaping holes in the games that their opponent can exploit, but who will come out on top?

Ike Villanueva is plodding and one dimensional, but his pure boxing ability isn’t bad at all. He throws good combinations in the pocket and is proficient at countering.

From the footage I’ve seen, he isn’t much of a grappler.

Against Trevin Giles, he tapped to an am-triangle (which is one of his opponent’s best submissions) and looked lost off his back.

In that fight, he was taken down by a double leg against the fence, although he was able to get back to his feet.

This is relevant because Vinicius Moreira has awful entries into his takedowns, but if he gets opponents on the fence then he can often get them down.

For all his shortcomings, Moreira does have a legitimate ground game and should be able to methodically advance positions in search of a submission. If the fight hits the mat, I don’t think it will take long for the Brazilian to finish the fight.

As far as striking goes, Moreira is a sitting duck. He lacks any offensive fluidity and is ridiculously slow and hittable.

I’ll side with Vinicius Moreira as an outright pick, but the value might be on under 1.5 rounds at -115. I don’t think either man can survive for long in the other’s realm.

A raw and aggressive kickboxer, Warlley Alves is known for his chopping leg kicks, big hooks in the pocket and knees in the clinch.

As the more compact fighter, I feel that low kicks will be essential if he wants to hang in the striking realm.

He’s not the best wrestler, but is capable of catching kicks and converting them to takedowns. We saw him do this against Randy Brown and James Krause.

It will be interesting if he decides to grapple in this fight. He’s mainly known for hitting opportunistic guillotines, but he should have an advantage in this match-up in terms of pure BJJ skills.

The big problem for Alves is his gas tank.

He performs adequately against opponents that are low volume or in fights where he has a significant advantage standing, but that won’t be the case here.

“The Sniper” throws blistering combinations down the pipe, hard leg kicks and stepping knees – which could be useful as his opponent tries to wade into the pocket. In open space, I definitely give him the advantage.

It’s lucky that he has a good chin, because Lazzez is hittable if you can get on the inside against him.

His takedown defense is not the best either, although he seems to have a good get up game – which could drain the gas tank of Alves if he’s unable to find the submission and has to shoot multiple takedowns.

I feel like this is a good match-up for Mounir Lazzez, but there is no way I am betting him at -230. Hopefully there will be a good live bet opportunity instead!

While not the most well-rounded fighter in the UFC, Michael Chiesa is good at imposing his will and forcing opponents into heavy grappling exchanges.

His striking is functional at best. He likes to feint in order to back opponents up and then punch his way into the clinch.

Chiesa’s preferred takedown is the body lock, although he may struggle to hit it on a much taller opponent who is also adept with that technique. Still, he’s not a one-trick pony when it comes to takedowns and is effective at chain wrestling against the fence.

While he can get submitted himself, Chiesa floats well on top and is an excellent back taker.

Securing a rear-naked choke early in the fight seems like his most probable win condition, because I’m not confident he can keep up with Neil Magny over five rounds.

Since returning to the Octagon after his brutal loss to Santiago Ponzinibbio, Magny has looked revitalized.

Staying off the fence will be imperative in this fight and he would do well if he can force Chiesa to fight off the back foot. Long straight punches and front kicks to the body should help him to maintain distance.

Magny is skilled in the clinch, but it wouldn’t be wise to allow Chiesa to tie up with him.

If he does get taken down, Magny will threaten with submissions off his back and fire slicing elbows from bottom position. The main risk is if he gives up his back while trying to scramble to his feet, which would be a death sentence against Chiesa.

He’ll probably have to weather an early storm, but I’m picking Neil Magny to prevail with his insane work rate and superior striking over five rounds.