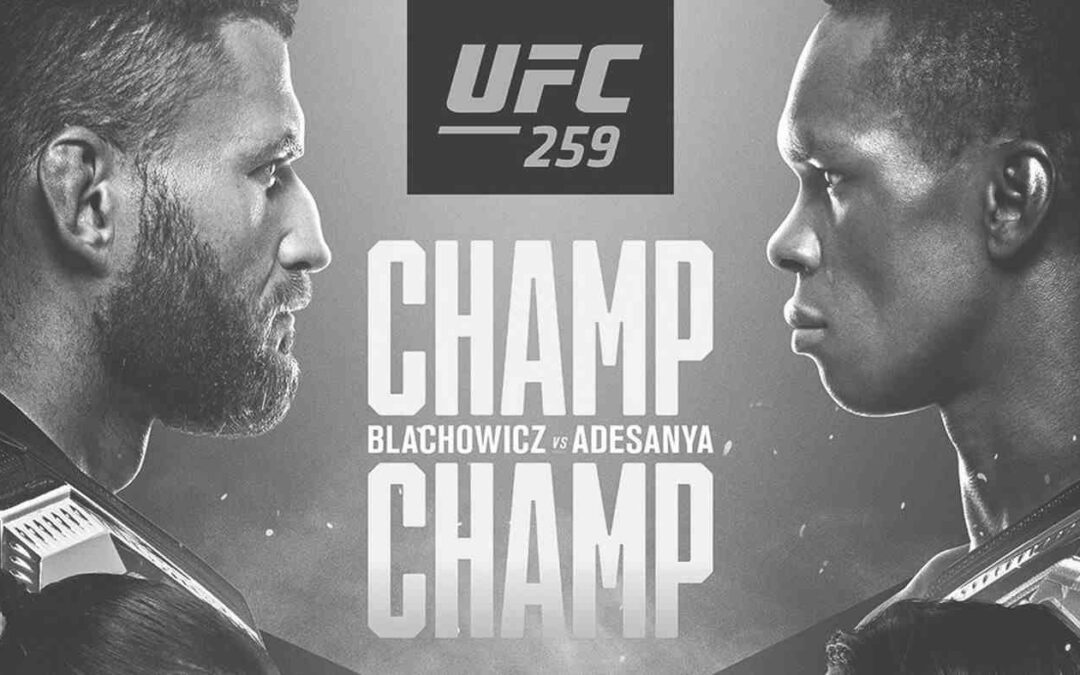 UFC 259 looks like an awesome card and I’m hoping to rake in some fat stacks of cash. Here are my main card UFC picks from a betting perspective.

Coming from a background in Muay Thai, Thiago Santos is a flashy and aggressive striker. His kicks are his main weapons and he fights effectively from both stances.

I wouldn’t say that Santos is a great boxer, but he throws with venom and can finish any opponent if he catches them with one of his big hooks at mid-range.

We’ve seen him struggle in the grappling department. While there is no shame in getting taken down and submitted by Glover Teixera, he also conceded takedowns against a lesser grappler in Eryk Anders.

I don’t think his takedown defense is especially bad, but a tenacious approach often gets the desired result when trying to wrestle him.

Santos has a black belt in BJJ, but he doesn’t look competent fighting off his back whatsoever.

He’s also getting up there in age and went through a long layoff due to a damaged knee and torn ACL after his fight with Jon Jones in 2019. He looked fine in the standing portions of the fight against Teixiera, but Father Time catches up with everyone.

Like his opponent, I don’t really rate Aleksandar Rakic’s boxing and he has some defensive vulnerabilities on the inside.

However, the Austrian is still a dangerous striker with brilliant low kicks as well as body kicks from both the lead and rear leg.

The most obvious path to victory for Rakic is with takedowns. In interviews, he’s mentioned that he loves to fight on the ground and feels he is the more complete fighter overall.

It looks like he’s been getting in plenty of training rounds with his NCAA All-American wrestling coach, who will also be in his corner for this fight. That said, wins over Justin Ledet and Anthony Smith don’t leave me with a strong read on exactly how good his wrestling skills are.

I cap this fight as a pick ‘em if it stays on the feet, but Aleksandar Rakic has the potential to look like a huge favorite if he’s able to wrestle effectively.

Following in the footsteps of Khabib Nurmagomedov, Islam Makhachev seeks to become the next Dagestani fighter to reign over the lightweight division.

Wrestling is his bread and butter, but his striking has got noticeably sharper over the years. He looked extremely raw in his 2015 bout against Adriano Martins, when he was knocked unconscious after over-extending on a punch.

These days, Makhachev is far more defensively sound and he manages distance well. Fighting from the southpaw stance, he has a good left body kick and counters well with the left hand.

Also a southpaw, Drew Dober comes from a Muay Thai base and throws devastating hooks in the pocket as well as hard low kicks. I’m sure he’ll want to utilize the outside calf kick in this southpaw versus southpaw match-up, as he did against Beniel Dariush.

I think Dober can cause plenty of problems on the feet, but keeping it there is another story.

Historically, Dober has struggled against good grapplers and even conceded takedowns against a half-conscious Alex Hernandez in his last contest.

This is a horrible deficiency to have against such a strong positional grappler like Makhachev.

Dober mentions that he’s made improvements in this area, but I’d need to see it to believe it. To bet him at +290, I’d just be taking a shot in the dark.

I’ll take Islam Makhachev as an outright pick, but there is no way I’d bet him at -350.

Siberia’s Petr Yan has some of the most sophisticated boxing I’ve seen in the UFC. He applies pressure intelligently, shifts effortlessly from one stance to the other and unloads heavy artillery on the inside.

He’s also proficient in the clinch and will punish opponents with devastating elbows off the break.

Yan is great at defending takedowns and is a phenomenal scrambler, so it’s difficult to establish a dominant position on him.

I love his overall MMA game, but he does have some shortcomings.

Firstly, he can be a bit inactive at times. Aside from a couple of big moments against Jimmie Rivera, he lost the majority of minutes in that fight.

Also, he’s the more compact fighter and has a tendency to absorb low kicks. Aljamain Sterling is a kick-centric striker, so I expect him to attack the lead leg early and often.

I think Sterling can cause problems with his movement and variety of attacks.

The American fighter manages distance excellently and could rack up points landing low kicks, front kicks and combinations down the pipe. However, the smaller octagon in The Apex could be to his detriment.

While Sterling doesn’t have the best takedowns in open space, he’s a savvy grappler and uses the fence to his advantage. He has great instincts for taking the back and can even do so from a standing position, as we saw against Cory Sandhagen.

Sterling has been known to slow down in the past, but I suspect this is due to pacing rather than cardio. This is a championship fight and he must know that putting away Yan early will be difficult, so you’d think he will pace himself accordingly.

This is a high level fight and you can make a case for either combatant, but I’m siding with Aljamain Sterling to snatch the belt.

People like to hate on Megan Anderson, but she’s a legitimate striker with huge power in her right hand. She’s also a big featherweight and I’d imagine she has a significant cut to make championship weight.

I think Anderson can cause some problems on the feet. We saw Holly Holm abandon her kickboxing roots and go straight to wrestling against Anderson, and this is obviously the easiest way to beat her.

Anderson has the type of long frame that is commonly associated with dreadful takedown defense. Despite possessing a BJJ purple belt, she looks inexperienced on the mat.

That said, she trains with a stellar team in Glory MMA and if James Krause hasn’t helped her to correct some of these shortcomings over the past few years, I’d be surprised.

I wouldn’t say Amanda Nunes is the most technical striker, but she’s a deadly puncher. She fires chopping low kicks and has a thunderous overhand, which can put any female bantamweight or featherweight to sleep if she lands cleanly.

Nunes is a BJJ black belt and skilled wrestler. From trips in the clinch to reactive double legs in open space, the Brazilian sets up her takedowns well and has a plethora of techniques to get her opponents to the mat.

On the ground, I’m expecting a one-sided beatdown.

Megan Anderson has a puncher’s chance and I can’t fault anyone for taking a stab at +750, but I think this is business as usual for the champion.

Standing 6’4 with an 80-inch reach, Israel Adesanya has the right measurements to compete at light heavyweight, but he’ll be fighting with a size disadvantage once both fighters have rehydrated.

Stylistically, it may not matter because both men are predominantly out-fighters.

Adesanya is a master of striking at distance. He throws out feints, make reads and capitalizes on openings like Neo in The Matrix.

I believe Adesanya will have a speed advantage and his footwork is brilliant, which makes him difficult to walk down.

Jan Blachowicz is more flat-footed and his skill set is pretty basic, but he’s still a dangerous striker. He may have to walk through fire, but pressure and timing will be the key to victory for him.

It’s difficult to land cleanly on “The Last Stylebender”, but Blachowicz does have the power to knock him out.

I don’t see grappling as a path to victory for Blachowicz, despite his black belt credentials. Offensive wrestling would be too draining on his gas tank, and Adesanya is probably the last opponent in the UFC you’d want to slow down against.

I feel like this will be a low volume, tactical affair with both men looking to time the other and exploit openings. I’ll pick Israel Adesanya to win outright, but I think the value is with the +195 underdog.