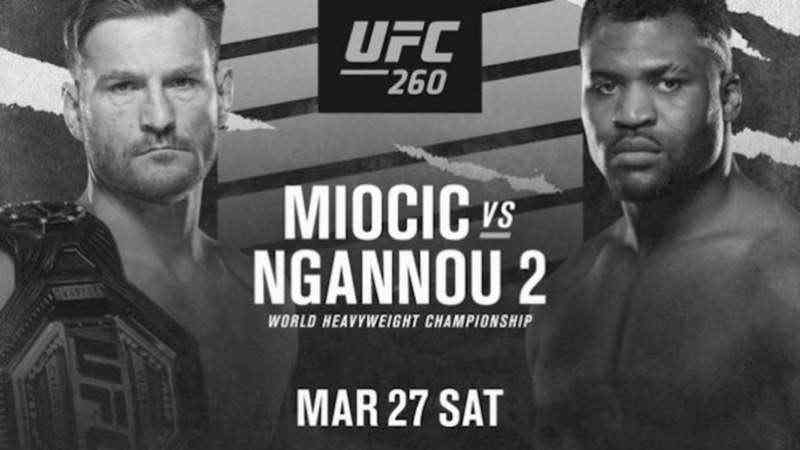 We’re set for a heavyweight title clash as Stipe Miocic takes on former adversary, Francis Ngannou, in an exciting rematch. From a betting perspective, I don’t love the card and probably won’t have much action this weekend.

Aside from his questionable chin, Khama Worth is a solid striker. He likes to fight with his feet firmly planted and uses lots of upper body movement in search for countering opportunities.

His hands are fast and he puts together combinations pretty well.

He’s less proficient as a grappler, and we saw some evidence of this in his fight against Luis Pena. It’s possible he’s made improvements in the past few years, but his regional footage suggests a lack of takedown defense and poor positional awareness on the mat.

Jamie Mullarkey is far less nuanced as a striker, but he seems to be making improvements from fight to fight and he has plenty of high level talent around him at City Kickboxing.

While I expect Mullarkey to get the worst of the exchanges if the fight stays at distance, his constant forward pressure makes me think we’re not going to see that type of contest.

Mullarkey sets up his takedowns well and is a serviceable chain-wrestler. I think the Australian has the ability to turn this into an ugly, grimy, grappling-heavy fight – where I would give him a firm advantage.

While hittable, Mullarkey seems to have a great chin. He may have to rely on it here, as he’s likely to get clobbered a few times while closing the distance.

I like the plus money on Jamie Mullarkey and would cap him as a slight favorite.

There are many well-rounded fighters in the women’s strawweight division, and Gillian Robertson isn’t one of them.

Her striking is non-existent, which makes her a sitting duck on the feet.

Fortunately for her, she knows where her strengths and weaknesses lie. She’s always looking to level change underneath a wild haymaker from her opponent or grab a kick and convert it to a takedown.

While not the most physical athlete, her takedown entries are good and she has a variety of techniques in her wrestling arsenal.

Robertson is a savvy positional grappler and should have a huge advantage if the fight hits the mat. If she gets a takedown, the round is likely a wrap (if not the fight).

Miranda Maverick is far more well-rounded and will have a significant advantage on the feet.

It’s possible Maverick has made improvements to her defensive grappling, but there were some red flags in her fight against Pearl Gonzalez – where she was taken down and swept by a lesser grappler than Robertson.

She also throws naked kicks, which could get her into trouble here.

I usually side with the superior grappler in women’s MMA. Gillian Robertson has a clear path to victory and I feel the value is with her as the +135 underdog.

As a younger prospect, Thomas Almeida had all the hype in the world – but things haven’t panned out for him.

He’s been able to get highlight reel knockouts over lower level competition, but hasn’t performed well as his opponents have got tougher.

Known as a Muay Thai striker, Almeida does his best work with short combinations on the inside.

At distance, the Brazilian is limited and will mainly have to rely on low kicks. Attacking the lead leg of Sean O’Malley wouldn’t be such a bad idea, since his leg gave out on him in his last contest.

Despite his clownish behavior and appearance, O’Malley is a highly technical out-fighter and I think he can run circles around Almeida.

The American has much better footwork, more tools at distance and will be able to make reads and capitalize on openings at a higher level.

The smaller octagon favors Almeida, who will be the fighter moving forwards, but I just see him getting picked apart and cracked before we see the final bell.

It’s safe to say that Tyron Woodley has seen better days. Once known as an explosive wrestler with one of the best right hands in the game, Woodley looks to be on a severe decline at nearly 39-years-of-age.

Speed and reaction times diminish with age, and this looks to be the case with Woodley. He simply can’t pull the trigger anymore!

While there is no shame in losing to the fighters that Woodley has lost to, he hasn’t exactly been given a softball in Vicente Luque.

Marching forward with his guard high, Luque has the ability to make the octagon feel claustrophobic.

The Brazilian is the far more technical kickboxer and could have success with low kicks in this contest (Woodley leans heavily on his lead leg).

Woodley could have a path to victory with wrestling, but we haven’t seen him do that in a while. I don’t think his cardio is good enough to invest in takedowns and he runs the risk of gassing badly if his shots are stuffed.

I’m not sure how much value there is at -250, but I feel confident that Vicente Luque gets the win this weekend.

I’ve seen a lot of people betting on Stipe Miocic, and I understand the angle.

In the first fight, Francis Ngannou got over-aggressive and expected his adversary to go down in the first round – like so many that stood before him.

It was a great performance, but that doesn’t mean we’re going to see a similar style of fight this weekend.

Ngannou is capable of making adjustments.

Most of Ngannou’s best knockouts are at the result of precise counters, not aggressive flurries. I think he has all the tools to win this (including takedown defense), he just needs to remain composed and let the fight come to him.

Miocic is coming off two straight victories, but he’s starting to show his age.

He looked stiff and hittable in his last bout against Daniel Cormier. Obviously this is a completely different stylistic challenge, but if he gets caught with similar shots against Ngannou – he’ll find his face planted on the canvas real quickly

I like Francis Ngannou here and I think there is a bit of value at -125.