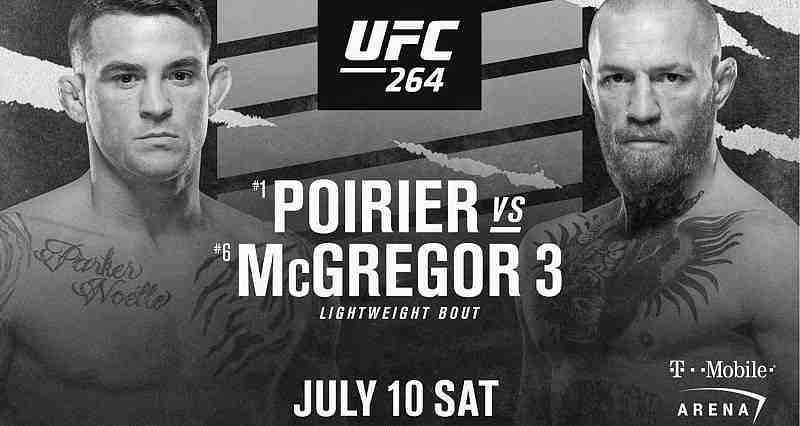 UFC 264 looks like a great event, both in terms of entertainment and betting opportunities. Here are my picks for the main card.

What is the point of this squash match?

Kris Moutinho is a decent regional level fighter, but nothing about his game indicates that he’s ready for the UFC. He has a functional striking game, but he’s less refined, slower and less defensively intelligent than his opponent.

I feel that he is going to oblige Sean O’Malley in a kickboxing match, which is the worst possible style to come at him with.

I’ve also seen him get rocked and finished by worse fighters than O’Malley on the regional circuit.

As much as I dislike O’Malley’s clownish behavior and appearance, the guy is a brilliant out-fighter. He will program opponents to expect certain strikes and then set them up for kill shots that they didn’t see coming.

I have no interest in playing Sean O’Malley at -900, but he should knock this dude out in spectacular fashion.

Mexico’s Irene Aldana has some of the best pure boxing in the women’s bantamweight division (offensively, at least).

She throws slick combinations and rips the body and head with equal ferocity. She also has some heat on her shots, as evidenced by her brutal knockout of Ketlen Vieira.

The problem for Aldana is that she is very hittable and doesn’t have a backup plan when she can’t get her boxing going.

Holly Holm completely schooled her by fighting adeptly off the back foot and mixing in well-timed takedowns to earn a lopsided decision victory.

While Yana Kunitskaya doesn’t have the same footwork or counter-striking ability as Holm, she does have a serviceable kicking game at range and the ability to force the clinch if she needs to.

Trying to box without getting grabbed is a difficult style to pull off in women’s MMA, where it’s harder to gain your opponent’s respect and the footwork is often not as sophisticated. This makes me think Aldana may struggle to keep the fight at boxing range.

Kunitskaya is skilled in the clinch and if she can hit takedowns, I think she can rack up control time against an opponent that is a bit of a turtle off her back.

I have to side with the more complete mixed martial artist in Yana Kunitskaya at plus money.

I’ve never been overly high on Tai Tuivasa. The New Zealander is a dangerous striker with finishing power, but he has some major holes in his game.

Fortunately for him, his lack of grappling talent is unlikely to be exposed here.

Tuivasa is dangerous with his knees, elbows and dirty boxing on the inside, but I don’t think he’s the most skilled striker in open space. He throws hard low kicks (which his opponent is susceptible to), but I don’t rate his boxing ability at all.

Greg Hardy is much faster and more accurate with his punches. He fires a crisp jab, has good upper body movement and counters effectively.

The former NFL player has the gift and curse of explosive power. He is a deadly finisher, but has a tendency to slow down if he can’t get the first round stoppage.

If you managed to live bet Marcin Tybura at wide odds after the first round against him, that was a sharp play!

Like his opponent, Hardy has some major deficiencies on the mat – but that is unlikely to come into play against another striker.

Hardy also has a significant size and reach advantage, which he should be able to capitalize on (so long as he’s able to deal with the leg kicks in open space).

This is a sketchy fight to bet on, but I’d cap Greg Hardy as a slight favorite rather than slight underdog.

Returning after a failed title shot, Gilbert Burns will look to get back into contention with a win over one of the most elusive strikers in the UFC.

Burns’ core strength will always be his BJJ, but he’s taken steps to round out the rest of his game at a great camp in Sanford MMA.

The Brazilian has developed into a serviceable wrestler and is a threat on the feet. I wouldn’t say he’s the most nuanced kickboxer, but he throws with venom and might be able to find some success with low kicks against an agile phantom.

I feel like his best path to victory would be to get the fight to the mat as early as possible, because his cardio is a bit suspect as well as his chin.

Stephen Thompson is getting a bit long in the tooth at 38-years-of-age, but he shows no signs of declining. The striking game of “Wonderboy” is extremely deep and he has some of the best footwork I’ve ever seen.

Thompson makes good strikers look completely lost and if he can keep the fight standing, I think he’ll put on another clinic.

He knows that fighters want to pin him against the fence in order to take him down and this is a position he drills a lot in the gym. In these instances, we see him use the whizzer, control his opponent’s head and circle out effortlessly.

Thompson could get taken down by a reactive double leg when he comes blitzing forward, but it’s generally difficult to get in on his hips because of his unorthodox movement.

I like Stephen Thompson in this bout and I think there is some value at -155.

Word on the street is that Conor McGregor became obsessed with boxing for his last fight with Dustin Poirier, presumably because there was a potential fight with Manny Pacquiao looming on the horizon.

While he had a good first round, his flat-footed stance was a recipe for disaster against a fellow southpaw – who chose to target his lead leg with calf kicks.

I’m expecting McGregor to come out with his traditional karate stance here with the intention of dodging, blocking and countering Poirier’s low kicks.

The Irishman is the slicker boxer and counter-striker, but I feel that bringing kicks back into his game would help him to set up his power left hand more.

To his detriment, McGregor is renowned for slowing down when he doesn’t get the early finish and that is a major problem against a relentless workhorse like Poirier.

While Poirier is effective when he’s able to square up and unleash powerful hooks at close range, I feel like he is the inferior technical striker. That doesn’t necessarily matter however, given his cardio advantage and ability to mix things up better than his opponent.

If Poirier can force prolonged wrestling exchanges, that would be ideal since it would drain McGregor’s gas tank far more than his own.

It’s worth mentioning that McGregor is now extremely rich after profiting handsomely from his whiskey business.

Does he still have the same hunger to compete as he did when he was coming up? We’re about to find out.

I’m picking Dustin Poirier to win the fight, but I won’t be betting him at -125. I am hoping that he drops the first round for a good live betting opportunity.