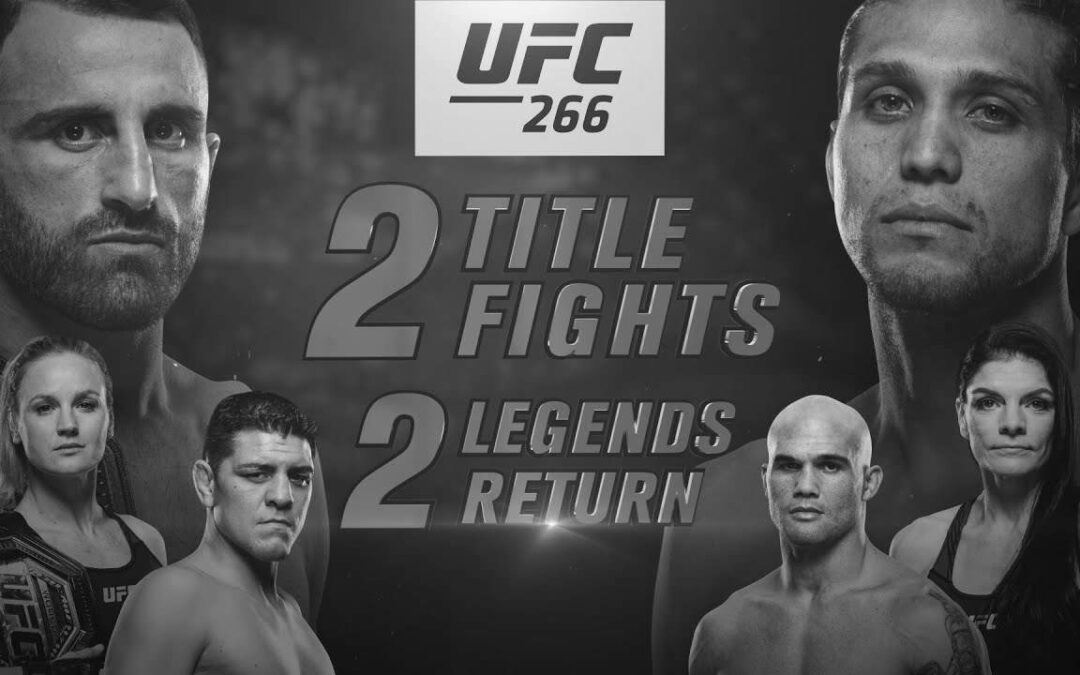 UFC 266 is a stacked card with plenty of intriguing match-ups. There are a few betting spots I like as well.

I consider Jessica Andrade to be a nightmare match-up for Cynthia Calvillo.

While Calvillo is a slick BJJ player when she’s able to secure a dominant position, her wrestling isn’t at a high level. In fact, she often relies on caught kicks in order to score takedowns and she is primarily facing a puncher in Andrade.

Calvillo has a functional boxing game, but she looks uncomfortable when standing for prolonged periods and her striking is usually effective because of the takedown threat.

Andrade may have been taken down and dominated by Valentina Shevchenko (who is in a league of her own), but she is still a good grappler and I just can’t see her conceding bottom position without major resistance.

On the feet, Andrade leaves plenty of defensive openings and has plodding footwork, but she applies constant pressure and is a good combination puncher in the pocket.

Jessica Andrade has all the tools to make this an uncomfortable night for her opponent and I can’t argue with the -275 price tag.

Coming back after a horrific knockout loss at the hands of “The Black Beast”, Curtis Blaydes is looking to get back on track with a win this weekend.

Ironically, Blaydes was winning that fight standing until he level changed onto an uppercut from one of the hardest hitters in the UFC. Blaydes might want to fake and feint his way into the clinch and get takedowns from there, because the biggest risk in this fight is that he gets caught on a bad entry again.

Blaydes is a great athlete and skilled chain-wrestler, which separates him from the rest of the heavyweight division.

If he’s not able to find a finish on top, I think he can easily hit takedowns and mat returns for fifteen minutes in order to defeat Jairzinho Rozenstruik on the scorecards.

While his output is low, Rozenstruik should have the advantage on the feet. He throws hard low kicks, has power in both hands and his check left hook is his best shot.

Historically, the Surinamese fighter has struggled to defend takedowns and is a bit of a turtle off his back. Hopefully he has improved his defensive grappling over at American Top Team, because this is a terrible deficiency to have against a dominant force like Blaydes.

I’m picking Curtis Blaydes to win, but I’m not confident enough to lay -310.

After securing a huge payday for his fight against Anderson Silva in 2015, it looks like Nick Diaz has been on a booze cruise for the past few years and is only returning to full training in preparation for this fight.

Has he blown all his money and is now searching for another paycheck? I have no idea.

Diaz was never a big welterweight and I think that it’s significant that he has demanded the fight be moved to middleweight at the last minute.

If he shows up in top form (which I’m not confident of), Diaz poses major problems for Robbie Lawler.

Like his brother, Diaz is a cardio machine and will slowly turn up the pace in order to drown opponents late in fights. He’s also the cleaner technical boxer and is a threat whenever the fight hits the mat (even from bottom position).

Unlike his opponent, I have no doubts as to whether Lawler is taking his preparations seriously. He is training at an elite camp in Sanford MMA and always shows up in peak physical condition.

Lawler has looked a bit tentative and shopworn in recent fights, but he’s been facing high level competition. Against another ageing veteran, this could be the perfect opportunity for him to get back in the win column.

“Ruthless” doesn’t have the same finesse on the feet as Diaz, but he throws with vicious intent and is fine with taking a shot in order to give one back. Look for him to unload with powerful 3-2 combinations as well as hard calf kicks against another southpaw.

Given the circumstances surrounding this fight, I have to side with Robbie Lawler – but I’m not confident whatsoever.

How on earth does Lauren Murphy win this fight?

“Lucky” is strong in the clinch, has decent boxing and possesses a BJJ brown belt, but she’s severely out-matched here.

She can’t hang at kickboxing range whatsoever. If she has any chance of winning, she needs to apply consistent pressure and turn this into a dirty and grimy fight in the clinch and potentially land takedowns.

We’ve seen Valentina Shevchenko get taken down in the past and she doesn’t look great off her back, but that’s about the extent of her shortcomings.

The Kyrgyzstan native is a phenomenal southpaw out-fighter with flashy counters and one of the nastiest head kicks in the UFC. She is also a great offensive grappler, but it remains to be seen if she can hit her preferred body lock against a physically strong opponent like Murphy.

Brian Ortega is a fighter I just can’t get a read on.

In earlier fights, he was renowned for blocking punches with his face and finding a spectacular KO or submission against the run of play.

However, since completely overhauling his coaching staff, he looked vastly improved in his last performance against The Korean Zombie. He fought out of a longer stance, picked his shots perfectly and looked like a seasoned striker.

I’m not sure he will have the same luck against the reigning champion.

When he first got to the UFC, Alexander Volkanovski was an unrefined wrestle-boxer who used to load up on all his strikes. He looks far more sophisticated these days and now incorporates good head movement, feints and footwork in order to get the better of opponents.

I expect Volkanovski to apply pressure, establish the jab and look to land calf kicks early and often against a defensively porous opponent.

Volkanovski has to watch out he doesn’t dip his head onto a knee or uppercut and he needs to avoid grappling exchanges at all costs, but I think he’s smart enough to know this.

The champion has a great mind for fighting and always comes up with a game plan that suits the particular match-up he’s facing.

I like Alexander Volkanovski here and I think there is a bit of value at -170.