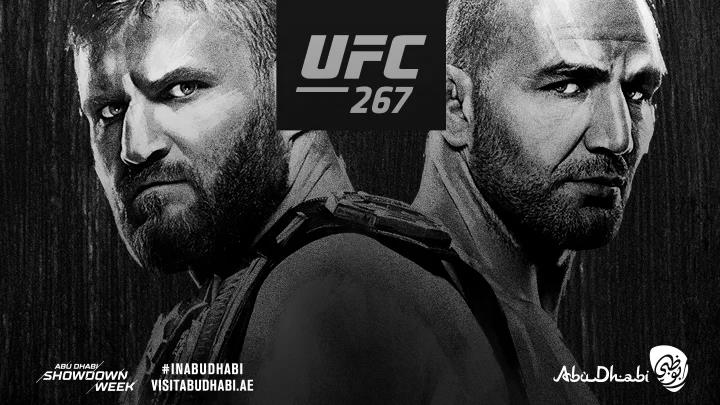 UFC 267 is a stacked card and I think there are some solid betting opportunities. Here are my UFC 267 main card picks from a betting perspective.

As a handicapper, I try to avoid being a fan of any particular fighter. First and foremost, I’m here to make cash.

That said, I love Magomed Ankalaev’s well-rounded skill set and he is probably my favorite combatant to watch in the UFC.

The Dagestani has a brilliant understanding of distance, throws fast counters off the back foot, has great wrestling and lands hellish strikes from top position. The sooner we see him in the title picture, the better.

I enjoy watching Volkan Oezdemir as well, but his skill set is far more crude. The Swiss fighter throws hard low kicks and wide power shots at close range, but lacks a bit of finesse as far as his overall striking game.

That’s okay though, when you have the touch of death in your hands – you don’t need to be the cleanest technician in order to emerge victorious.

Ultimately, I feel Oezdemir is too slow-footed to get in range and land one of his kill shots. Furthermore, his calf kicks will be somewhat mitigated by Ankalaev fighting in the opposite stance.

If things get dicey for Ankalaev on the feet, he also has the option to level change. Oezdemir may have success defending the initial shot, but I think he’s in deep trouble if he ends up flat on his back.

The bookmakers have Magomed Ankalaev priced at -300 and that seems about right to me.

I’m annoyed that Leon Edwards vs. Khamzat Chimaev was cancelled, because that fight would have answered some major questions about the surging Chechen prospect.

We know Chimaev is a fantastic wrestler with a devastating top game, but he couldn’t have asked for more favorable matchmaking.

What is going to happen when he faces a strong counter-wrestler who can drag him into deep waters and force him into a kickboxing match? We’re unlikely to find out this weekend.

I don’t want to discredit Li Jingliang. The Chinese fighter has powerful boxing and a fast sprawl, but we recently saw him get thoroughly out-grappled by Neil Magny (who is far from an elite wrestler at welterweight).

It’s possible “The Leech” could catch Chimaev cold, but he’s probably getting taken down and pulverized.

I wouldn’t bet Khamzat Chimaev at -500, but it’s hard to see him lose here.

A couple of years ago, Marcin Tybura looked like he was heading out of the UFC on a hard decline. Apparently he wasn’t taking his training seriously back then and has now reignited his passion for fighting.

The Polish fighter showed real grit and determination to win his last few fights and should be commended for fighting through adversity.

Tybura has a functional kickboxing game, but he’ll quickly find himself out of ideas if he can’t get the fight to the mat and utilize his black belt in BJJ.

While Alexander Volkov found himself out-gunned against Cyril Gane, I’d favor the hulking Russian over everyone at heavyweight except for a few elite contenders.

I expect him to perform similarly to how he did against Walt Harris and Alistair Overeem, with plenty of front kicks to the body and heavy boxing pressure.

If Tybura is forced to fight at boxing range, it’s only a matter of time before he gets knocked out.

I also think Volkov can deal with the wrestling threat – presumably he added the extra muscle mass to his frame for this purpose. If he does wind up on his back, the Russian is a savvy guard player and should be able to stay out of trouble until the next round.

I know -300 is a steep price to pay, but I’m confident Alexander Volkov gets the job done.

Dan Hooker is a savage for taking this fight, because nobody else wanted to!

The New Zealander is known for his long and rangy kickboxing game, but he is not a fish out of water on the wrestling mats. His offensive wrestling looked good in his last bout against Nasrat Haqparast and you’ve got to assume he’s putting plenty of hours in with his coach Frank Hickman at the moment.

That said, he is facing a phenomenal wrestler in Islam Makhachev and he may be reliant on catching his opponent coming in with one of those big knees down the middle if he wants to win this fight.

Makhachev isn’t a potent ground striking specialist like Khabib Nurmagomedov, but he is like a cement block from top position and is fantastic in transition.

There are only a few wrestlers in the lightweight division that come to mind when I think of who could potentially stop the takedown from Makhachev, and Hooker isn’t one of them.

Still, fights aren’t won on paper and “The Hangman” is an extremely tough and gritty dude. He wouldn’t have volunteered himself for this challenge if he didn’t think he could win, so I’m excited to see what he has in store.

This should be business as usual for Islam Makhachev, but I can’t blame anyone for taking a shot on the underdog at +450.

Coming from a background in boxing, Petr Yan has some of the slickest hands and footwork in the bantamweight division.

The Siberian is most dangerous when he has his opponent pinned against the fence. He’ll throw the first shot as a decoy and then blast you at full force with the second or third in the combination.

It’s hard to know what shot is coming next. Oftentimes, you don’t even know what stance it will be coming from!

Yan is a master of applying mental pressure and will stay in range in order to intimidate opponents with the threat of his next onslaught. You sometimes see this from high level boxers (Liam Smith is a recent example), but not so much in MMA.

As deadly as Yan is, he is prone to periods of inactivity and it’s possible to chip away at him if you can maintain kicking range.

Against Jimmie Rivera, he lost minutes in that contest and won the decision solely on big moments. He can’t afford to lose minutes against Cory Sandhagen, who is far more varied in his offense and will be happy to fight off the back foot.

Sandhagen fights well out of both stances, has excellent body shots and will look to time a flying knee as his much shorter opponent strides into the pocket.

Both men are excellent at making reads and capitalizing on openings, so I think we’re in for a high level chess match.

I have no idea who will win, but I’m fairly confident Cory Sandhagen will outperform his +200 price tag.

At 38-years-of-age, Jan Blachowicz has been turning out the best performances of his career.

While somewhat slow-footed, the Polish fighter has great timing, picks his shots intelligently and has power in both hands (his best weapon is his left hook).

It seems fairly clear that he will win this fight if he can remain upright.

Earlier in his career, Blachowicz struggled with bad cardio and takedown defense, but he has taken steps to fix these deficiencies.

While Blachowicz has a black belt in BJJ, he is at a major disadvantage on the mat and he wants to avoid ending up on his back at all costs.

Glover Teixeira has lost a step with his striking at 41-years-of-age. He still has some offensive power, but he looks more stiff and hittable with every fight.

Fortunately, the Brazilian still has a good chin and is the only fighter I can think of that gets better the more you hit him!

While he usually gets beaten and battered in the first round, Teixeira has a fantastic double leg and generally takes down whoever he wants. If he can get on top, I think he has a good chance of advancing positions and finding the finish.

I don’t favor Glover Teixiera outright, but I think he has a better chance of winning than his +250 moneyline indicates.