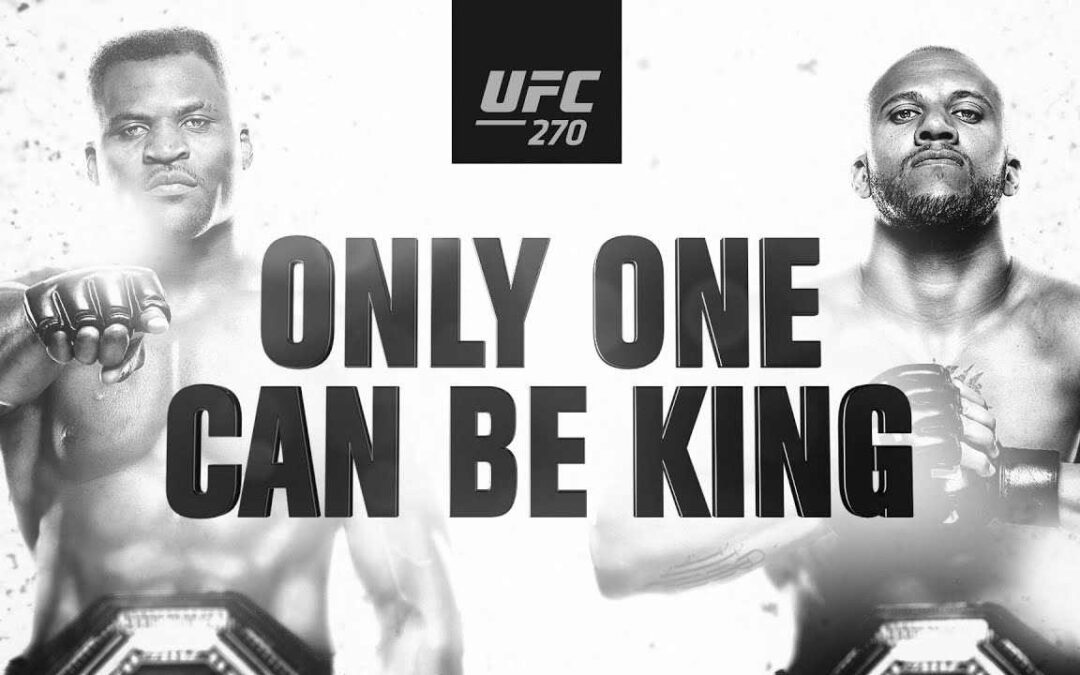 UFC 270 looks like a good card for betting and it is headlined by the greatest heavyweight fight of all time. Here are my main card breakdowns from a betting perspective.

Rodolfo Vieira looks like the kind of guy who could really benefit from a 195-pound weight class in the UFC.

He cuts an impressive physique for a middleweight and his raw strength is evident, but he uses a lot of big explosive movements and the hard weight cut must take a toll on his gas tank.

We usually see him get off to a good start, but he’s liable to get out-hustled if he doesn’t find the early submission.

As an elite BJJ player with an explosive double leg, he can often end the fight with a single takedown – but those finishes are going to be harder to come by as his level of competition increases.

On the feet, Vieira is basic. He throws a nice jab and 1-2 combination, but he is extremely rigid and defensively vulnerable.

Against another grappler, his striking deficiencies probably won’t get exposed. In fact, I think Vieira has the advantage if the fight stays standing.

Turman throws some functional low kicks, front kicks and spinning attacks – but he is not a comfortable striker. He mainly throws offense in order to work his way to the clinch, where he chain-wrestles opponents to the mat and tries to choke them out.

Despite possessing a black belt in BJJ, he is second-best on the mat and I wasn’t impressed by his performance against Bruno Silva when he ended up on his back. Silva casually laid in his guard and beat the crap out of him.

That doesn’t suggest he will fare well if he ends up on bottom against Vieira.

I can’t bet a guy with cardio issues like Rodolfo Vieira at -220, although I do favor him outright. If you managed to hop on the over 1.5 rounds prop when it was around -110, I think that was a decent bet.

An archetypical wrestle-boxer, Cody Stamann has been a mainstay in the bantamweight division for years.

“The Spartan” has a good left hook, sharp counters and mixes his offense up to the body and head.

His boxing can be effective against opponents with a similar body type to him, but he will be giving up significant height and reach against a formidable out-fighter in Said Nurmagomedov.

I think the Russian will cause major problems with his slick footwork, dynamic kicks and spinning attacks if the fight stays standing. However, we saw him concede takedowns against Raoni Barcelos and he has to be wary of well-timed level changes in this contest.

Stamann has good double and single leg takedowns, but I suspect he will look to drag Nurmagomedov to the ground from caught kicks. There will also be opportunities to level change when the Russian spins and exposes his back.

While Stamann doesn’t have the best top control, he could potentially snatch a victory on the scorecards if he keeps the striking competitive and hits takedowns in two out of three rounds.

That said, I think the Russian will get way ahead on significant strikes. If the judges are adhering to the Unified Rules, this favors him substantially.

Said Nurmagomedov to win by decision is the line that stands out to me at +120.

Taking this fight on short notice, Andre Fialho has a tough task ahead of him in his UFC debut.

The Portuguese athlete is an effective boxer and can definitely crack, but he needs his opponent stand right in front of him in order to do his best work.

He will apply constant pressure and try to work his way into boxing range, but he is pretty slow-footed, which is a massive problem for him in this contest.

Michel Pereira has excellent movement and should be able to stick Fialho with jabs, front kicks and low kicks while avoiding any pocket exchanges.

The Brazilian is an excellent striker when he decides to fight fundamentally, but he loves showboating and leaving the crowd awe-struck. It’s awesome to see back flips and flashy capoeira kicks in the UFC, but all those crazy techniques come at a cost.

If Pereira isn’t intelligent with his energy management, Fialho might be able to walk him down and land concussive blows on his chin.

This is a great stylistic match-up for Michel Pereira – but I don’t trust him enough to pay -270. There might be some value on his KO line at +200.

I’m not sure what to make of this trilogy fight.

In the original contest, Deiveson Figueiredo performed like a favorite and would have won if it wasn’t for a point deduction, whereas he was thoroughly outclassed in the rematch.

Interestingly, the Brazilian wasn’t as aggressive in the second bout and fought with a more measured approach – which didn’t work out well.

Under the tutelage of Henry “Triple Cringe” Cejudo, I think we’ll see him get back to his old ways. He certainly looks in peak physical condition.

Figueredo isn’t the most nuanced boxer, but he likes to fight with his hands low and bait opponents into swinging on him – knowing that he can crack them back harder.

He is a natural fighter if I’ve ever seen one.

I believe Figueiredo will go after the lead leg of Brandon Moreno (just like Cejudo did to Dominick Cruz). Moreno uses the jab to set up his offense and his lead leg is begging to be kicked.

As far as pure boxing goes, Moreno is levels ahead. I think he can land clean punches down the pipe all night on the Brazilian, it just depends whether he can avoid getting countered with hard power shots or having his leg chopped to pieces.

As far as grappling goes, I consider Moreno to be more fundamental. Both men can take each other down, but we saw Moreno hit a reversal and choke Figueiredo out in the last fight.

I wouldn’t be surprised by any outcome here, but in a fight that’s likely to be wild and chaotic, I believe the value is with Deiveson Figueiredo at +150.

Cameroon’s Francis Ngannou is an incredible physical specimen and probably the hardest puncher in the history of mixed martial arts.

His technique isn’t always the cleanest, but with his fast twitch, explosive attacks, he only needs to connect once in order to blast opponents into an alternate dimension.

Some of Ngannou’s most impressive knockouts were counters, but I don’t think he’ll win that way here.

We saw Ngannou put combinations together a bit better in his rematch against Stipe Miocic, and I believe he’ll need to throw extended combinations while moving forward if he wants to catch the elusive Cyril Gane.

Unlike Ngannou’s previous opponents, Gane doesn’t need to work his way into boxing range to win the fight. I expect him to pump the jab and chip away with kicks from the outside.

“Bon Gamin” has the best footwork I’ve ever seen from a heavyweight fighter. Don’t expect him to load up with wild power shots like Junior Dos Santos did and leave countering opportunities for the Cameroonian.

If Gane can compromise Ngannou’s lead leg, that will take some spring out of his step and reduce his punching power – which would dramatically improve the Frenchman’s chances of victory.

I’m picking Cyril Gane to get his hand raised, although there are bound to be some sketchy moments as wild haymakers whistle past his chin.