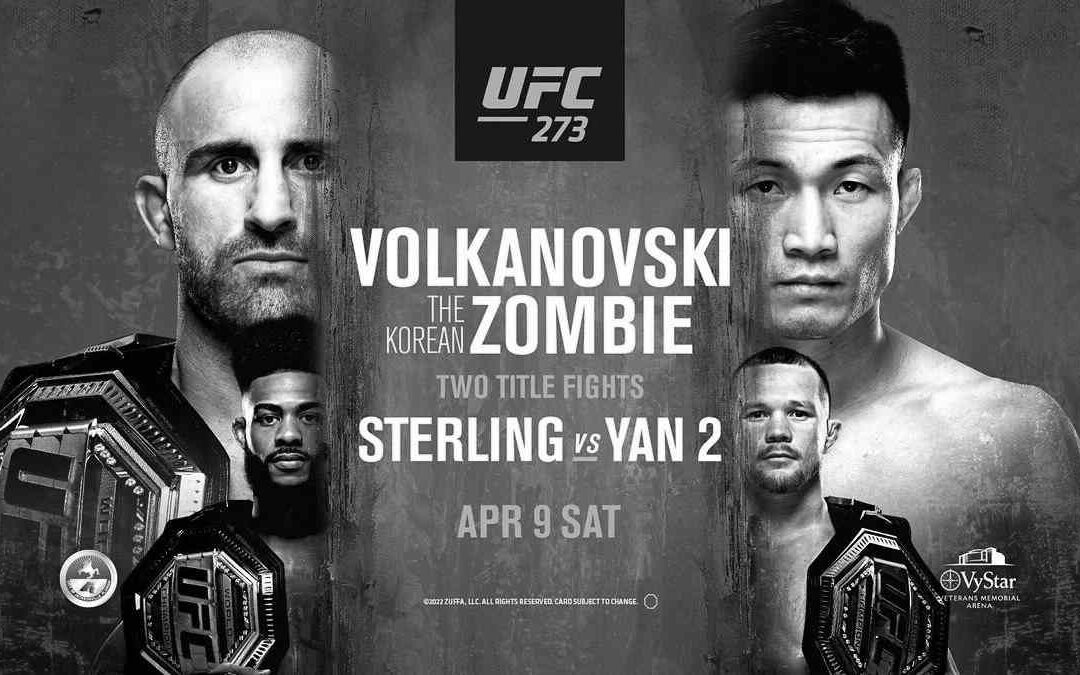 UFC 273 is an entertaining fight card with plenty of big names featuring, but it’s a tricky event for betting. I feel many of the lines are accurately priced and it’s difficult to spot value.

At 37-years-of-age, Denmark’s Mark Madsen is still a developing fighter. After winning a silver medal at the 2016 Olympics in Greco-Roman wrestling, the Dane switched his focus to MMA and is undefeated in his career thus far.

He has good upper body takedowns from the clinch and is strong in top position, but his striking is a work in progress.

Fight Ready is the perfect camp for him to round out his game and his striking looked improved against Clay Guida. He showcased a stiff jab, effective knees and low kicks – although he lacked head movement and defense.

He showed the ability to pace himself for three rounds against Guida, which wasn’t the case in the past. I’m sure Henry Cejudo has him on an excellent strength and conditioning program.

Vinc Pichel is tough as old boots and is a difficult guy to take down. He’s even harder to hold down and I can’t see Madsen establish a dominant position on the mat.

At 39-years-of-age, Pichel is a bit slow and rickety, but has good footwork and accurate hands.

I wasn’t impressed by his last few performances. He outlasted a renowned gasser in Jim Miller and did the bare minimum to get his hand raised against Austin Hubbard.

Conventional wisdom suggests Pichel should be able to keep the fight standing and win a striking match, but I’m not so sure after watching footage. Madsen is making improvements from fight to fight and I think this will be closely contested.

I’m picking Mark Madsen to spring the upset as the slight underdog.

Mackenzie Dern is the best female BJJ practitioner that we’ve seen in the UFC. Despite competing in the world’s top promotion since 2018, she hasn’t rounded out her skills to become a complete MMA fighter.

Her striking is still sloppy and malcoordinated and she lacks the wrestling to compliment her ground game.

I liked how she chained off the single leg against Nina Ansaroff to get the fight to the mat, but her wrestling was largely ineffective in her next bout with Marina Rodriguez.

She struggled to get the single leg against Rodriguez and her attempts to get in on her hips were met with underhooks, followed by a barrage of knees and elbows.

Tecia Torres is lightyears ahead on the feet and is the more skilled wrestler, but her margin for error is minimal – which makes this a difficult fight to handicap.

“The Tiny Tornado” should win minutes easily, dancing circles around Dern and lighting her up on the feet – but one caught kick or minor mistake could result in a submission loss.

Furthermore, Dern is the larger combatant and Torres could probably fight at atomweight. A physicality edge is highly beneficial if your path to victory involves getting the fight to the mat.

Tecia Torres to win by decision is the line that stands out to me at +150, but I’m not confident by any means.

There is a lot of hype behind Khamzat Chimaev, and it’s easy to see why. The Swede has demolished everyone the UFC has put in front of him and it’s about time he got a step up in competition.

Because his wins have come so quickly, we don’t have the full read on his skills.

We know he’s a phenomenal wrestler with explosive takedown entries and an otherworldly ability to maneuver his way around the bodies of trained fighters from top position.

But we don’t know how well he can take a punch, what his striking looks like during prolonged exchanges and how his cardio holds up in the later stages of a fight.

At the very least, he’s a top contender at welterweight. At best, he could be a generational talent.

We just don’t know yet.

I hope we get some questions answered against Gilbert Burns, who has proved he can hang with the upper echelons of the division.

Burns is a crude striker, but he has some steam on his right hand and throws vicious low kicks. The problem is, I don’t think he can keep the fight standing for long enough to dish out damage.

The Brazilian has incredible BJJ skills when he’s the one in a dominant position, but I don’t see how he gets there. Making something happen off his back doesn’t seem feasible against a wrestler with such dominant top pressure.

Facing a submission specialist in a 2018 regional fight, Chimaev was careful to avoid his opponent’s guard – but still managed to control him and pound him out in the first round.

I think we see a similar outcome here.

I bet Aljamain Sterling in the original fight and although he won, I was obviously on the wrong side.

Sterling came out red hot in the first fight, but I think we’ll see a more patient approach this time. While he might want to shoot takedowns to give Petr Yan something to think about, grappling is not a viable path to victory and will only serve to diminish his gas tank.

If Sterling is to emerge victorious, I think he needs to fight behind the jab, throw kicks and move laterally. If he can throw at a high clip for five rounds without getting bombed into oblivion, he has a chance of snatching a decision on the scorecards.

Yan is excellent at cutting off the cage and applying mental pressure. Although he comes from a boxing base, he is not one-dimensional and does an excellent job of throwing leg kicks, body kicks and mixing up his combinations.

The Russian is a savage in the clinch as well, which makes it difficult for Sterling to grab hold of him to alleviate the pressure.

Many consider Yan to be the best active fighter in mixed martial arts today, and I can’t argue with it. In addition to a world class skill set, the Russian has an iron chin and endless gas tank – which makes him supremely difficult to beat.

I’m picking Petr Yan to win inside the distance, potentially in the championship rounds.

When Alex Volkanovski first entered the UFC, he was a crude wrestle-boxer with heavy ground strikes.

How times have changed!

Since training at City Kickboxing, Volkanovski has become a sophisticated striker. He utilizes feints and feints, fires chopping low kicks and has an excellent jab.

He still has wrestling in his back pocket, but can now defeat lifelong strikers at their own game – which is a sight to behold.

This fight is intriguing, since he will be facing a big puncher with excellent countering ability. He must use feints to draw out the power shots from Chan Sung Jung and then go third with his own attacks.

Low kicks should also be part of the game plan, but he needs to watch out for the right hand counter from the Korean fighter.

Like Volkanovski, Jung has also improved in recent years. He was once renowned as a chaotic brawler, but has adopted a more patient approach since training at Fight Ready with Eddie Cha.

Jung will often leave his chin out there and drop his lead hand, baiting you to hit him so that he can hit you back harder.

He might land some hard shots in this fight, but Volkanovski has a brick for a head will be difficult to put away.

Hustle, finesse and cardio are all on the side of the reigning champion and it’s difficult for me to see him lose this weekend.

Alex Volkanovski to win inside the distance is the line that stands out to me at +190.