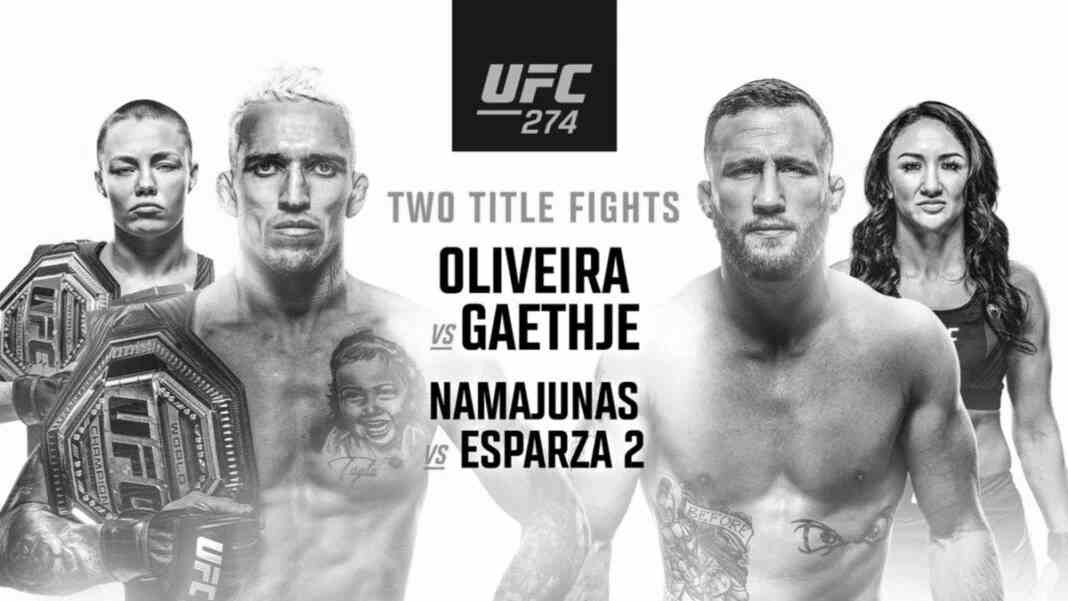 I’m coming off a profitable weekend and I’m on the hunt for more cold hard cash.

UFC 274 looks like an entertaining event, but I didn’t feel like breaking down a couple of the bouts from the main card and have swapped in some intriguing prelim fights instead.

Here are my breakdowns from a betting perspective.

I’ve bet on Norma Dumont in her last couple of fights and I enjoy her Sanda striking style. She fights well behind the jab, fires a crisp 1-2 and has effective low kicks.

With a low center of gravity, her takedown defense is above average and she does a good job of fighting hands and circling out when opponents push her against the cage (when she’s fresh, at least).

Her output drops as she tires and we haven’t seen an opponent really push a pace against her.

Macy Chiasson is far more chaotic and wild. Standing 5’11 with a 72-inch reach, she has a fantastic frame for a female striker – although she lacks the skill to fight long effectively.

Her frame comes in handy in the clinch, where she has leverage as the taller fighter. I suspect the game plan will be to pressure heavily and pin Dumont against the fence by any means necessary.

In open space, Chiasson’s face is a magnet for straight punches, although she has plenty of offensive firepower herself. She attacks with all eight limbs and will sometimes switch to southpaw in order to land hard kicks to the liver of orthodox opponents.

Chiasson’s takedown defense is a liability, but she stays active off her back and is capable of sweeping opponents in order to take top position (we saw this against Marion Reneau).

Macy Chiasson is a flawed fighter, but I feel she is the value side at +185.

I don’t think Khaos Williams is a particularly skilled combatant, although he is extremely dangerous.

He either hangs back and plays the role of a patient counter-striker or blitzes forward, throwing extended combinations. He loads up and gets wild with his shots, but everything has steam behind it and a clean connection can flatten most welterweights.

Williams is a step behind Randy Brown in terms of technical ability, but he could even the odds if he gets his low kicks going.

Brown’s stance makes him vulnerable to low kicks. This was apparent against Vicente Luque (although Brown came into that fight compromised and was not his best self).

So long as Brown is aware of this threat, I think he can plan accordingly. I expect him to slide in and out of range, fire back with his own low kicks and potentially even grapple.

We saw Michel Pereira have success in the grappling department against Williams and it wouldn’t shock me to see Brown mix things up.

I have to side with the more complete mixed martial artist in Randy Brown at +100.

At 38-years-of-age, Tony Ferguson looks like a fighter on a hard decline. He moves slower, has lost his reflexes and most alarmingly of all, can’t seem to stop a takedown.

In the past, trying to wrestle Ferguson would be met with granby rolls, elbow attacks and submission attempts from guard – but Beneil Dariush and Charles Oliviera were both able to take him down and control him from top position.

Michael Chandler sometimes opts to slug it out instead of wrestle, but I don’t see why he can’t do to Ferguson what he did to Brent Primus (who is also a crafty black belt) in 2018.

Things may get interesting if Chandler has abandoned hopes of getting the belt and instead wants to put on a show. A booking against Conor Mcgregor would provide a gigantic payday to end Chandler’s career and he won’t get it with a lay and pray approach.

Chandler looked chinny before he came over to the UFC and he has taken a lot of damage since then. The way he steps in when attacking, Ferguson could time him with an intercepting elbow, knee or uppercut.

Even as a declining fighter, Ferguson is monstrously durable and has cardio for days. Chandler is the more technical boxer, but Ferguson is a live underdog if the fight descends into a shootout.

Michael Chandler is the rightful favorite, but betting him at -400 is insane. I’m going to sit back and see if any live betting opportunities emerge.

Once known as a dangerous submission specialist, Rose Namajunas has dramatically improved her striking under the tutelage of Trevor Wittman.

She is now one of the most sophisticated out-fighters in women’s MMA, with excellent footwork, feints and long range attacks.

Her resume includes impressive wins over Jessica Andrade, Weili Zhang and Jedrzejczyk – but this is an entirely different challenge.

Coming from a college wrestling background, Carla Esparza is one of the most tenacious grapplers in the UFC. She has great timing on her reactive double leg, cuts a nice angle with the single leg and will shoot and re-shoot until she finally secures top position.

Esparza can be guilty of blanketing opponents without dishing out damage, but her top game looked excellent in her last bout as she maneuvered her way around Yan Xiaonan and finished her with elbows.

Namajunas’ takedown defense looked shaky against Weili Zhang and it wasn’t hard for the Chinese fighter to get her off balance. I’m confident Esparza will be able to get her down and I don’t think she needs perfect entries to do so.

I question the mental resilience of Namajunas and I don’t think she will enjoy this type of fight.

Namajunas likes to use the butterfly guard to get back to her feet and will threaten with submissions in order to force scrambles, but I think she will get exhausted doing this against a rabid dog who wants to do nothing but take her down and maul her.

I like Carla Esparza to come through as the +180 underdog.

It’s great to see Charles Oliveira’s improvements on his latest run of form. He was once known as a fighter that would check out in the face of adversity, but recently put on the grittiest performance of his life in order to choke out Dustin Poirier in the third round.

“Do Bronx” brings a classic blend of Muay Thai and BJJ that you often see from Brazilian athletes. He is a little rigid and hittable, but is lethal with all eight limbs and should have the advantage in the clinch and at distance.

Furthermore, the Brazilian is such a dangerous submission threat that he can afford to throw caution to the wind on his feet. It doesn’t matter if he ends up on bottom position after getting a kick caught, he can finish you there with ease.

I don’t think Oliviera will be able to hit a double leg or body lock on Justin Gaethje, but a guard pull or standing back take could be how he gets his grappling going.

Gaethje has strong takedown defense, but I suspect he doesn’t train his ground game very much.

Landing hard low kicks will be essential for Gathje to avoid getting overwhelmed. Oliveira has long, skinny legs and I don’t think he can eat many low kicks without crumpling.

Gaethje has a pure boxing advantage and is a savage counter-striker. I think he’ll be able to land shots through and around the high guard of Oliveira, but whether he can keep the fight at his preferred range remains to be seen.