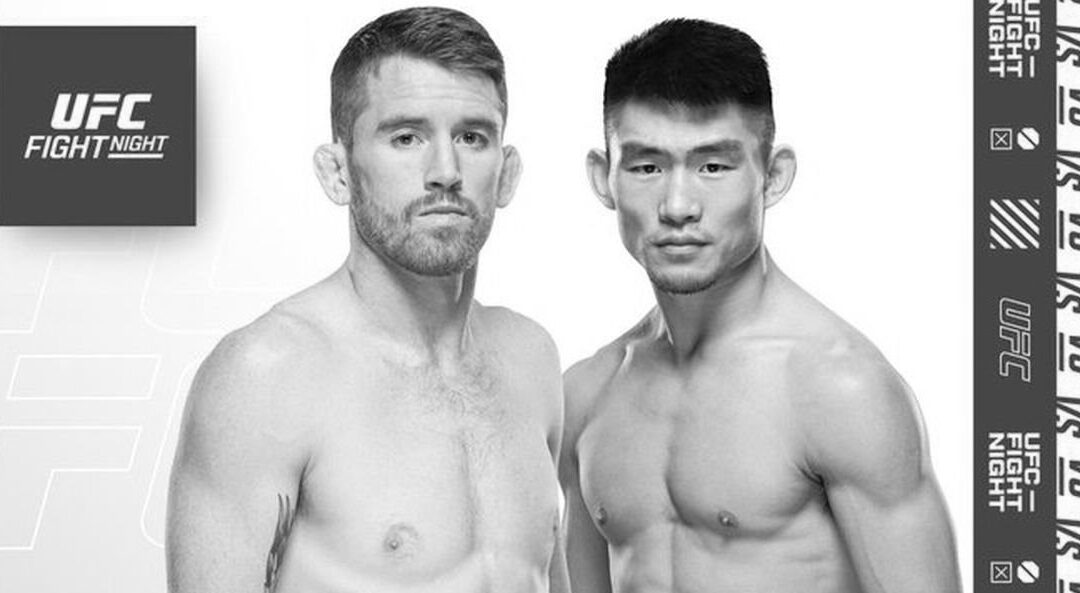 Coming from a background in karate, Tanner Boser is one of the more agile heavyweights on the roster. The Canadian moves light on his feet and has a good jab, overhand and an array of dynamic kicks in his arsenal.

With a clear speed and footwork advantage, Boser should get off to a good start in this bout.

However, we’ve seen Boser look vulnerable off his back, both in his fight against Ilir Latifi and in his performances for Absolute Championship Akhmat earlier in his career.

He’s had some time to improve since we last saw him inside the octagon, but he was dealing with an injury for much of his layoff and he trains in a smaller gym in Alberta, Canada, without elite level training partners.

Boser is on the smaller side for a heavyweight (which is unideal for defensive wrestling) and he could be susceptible to conceding takedowns from a caught kicks.

Rodrigo Nascimento is the more well-rounded combatant. He is a bit plodding and hittable, but he does a decent job of cutting off the octagon and possesses serviceable wrestling as well as striking.

I feel that the small octagon is favorable to Nascimento as the fighter who will be looking to close the distance.

The Brazilian has a black belt in BJJ and should have a huge advantage if he can muscle his opponent to the ground. One takedown could be a round in the bank.

I could see this going either way, but I definitely think the value is with Rodrigo Nascimento as the underdog.

Respectfully, I don’t believe Alen Amedovski is a UFC level athlete – especially at middleweight where he is undersized.

The Macedonian comes forward, throws with vicious intent and has big power in his hands, but he has a lot of flaws to his game.

Amedovski is defensively vulnerable on the feet. He also has a questionable chin and weak defensive grappling.

Joe Pyfer is better in every aspect of MMA. He is also bigger, more physical and trains at a gym that is on fire at the moment.

In his recent Contender Series performance, we saw improved striking from Pyfer as he was able to land jabs, leg kicks and heavy counters to knock out an opponent who is far superior to this one.

This is a mismatch. I expect Joe Pyfer to dominate wherever the fight takes place.

Andre Fili and Bill Algeo belong to the same archetype of fighters. Both men are tall and rangy out-fighters with BJJ skills in their back pockets.

However, I think Fili has an advantage in wrestling and more significantly on the feet.

Algeo is a tricky striker, but he likes to hang at range and I’m not sure how he will deal with an opponent who has a similar body type to him. Fighting with his hands low, I think he is going to eat a lot of straight punches from Fili – who has one of the best jabs in the featherweight division.

Furthermore, Fili fights well from both stances and I think the body and head kick from southpaw could find a home.

Fili is hittable, but Algeo isn’t a big puncher and I don’t think he can turn the tide with a single punch if he is losing on volume.

I also feel that Fili can score takedowns if the fight is close on the feet. He may not be able to solidify top position (Algeo is a fantastic scrambler), but some effective wrestling could provide a good optic for the judges.

I like Andre Fili to come through as the slight favorite.

In a pure kickboxing match, there aren’t many middleweights I’d favor over Chidi Njokuani.

The Nigerian throws snappy front kicks and clean straight punches in open space. He is also lethal in the clinch, counters well off the back foot and has good defensive awareness.

In the past, Njokuani has shown severe deficiencies in the grappling department. In his Bellator fights, he would often get held against the fence or taken down and dominated.

Njokuani has a black belt in BJJ and seems to have improved his defensive wrestling in recent years, but he hasn’t dealt with much adversity. I wish his fight against Marc-Andre Barriault would’ve lasted longer, because I think it would’ve been insightful.

Gregory Rodrigues has less finesse as a striker, but he’s still extremely dangerous. The Brazilian wades forward like a savage and unloads heavy combinations with his hands.

That said, If Rodrigues plants his feet and starts trading with a better technician, he’s going to get knocked out.

I don’t believe he will.

Rodrigues is the more credentialed BJJ black belt and superior MMA grappler. The Brazilian is slick in transition and is an excellent back taker.

With world class coaches and training partners around him, I doubt he’s coming into this fight with the intention of brawling.

I think he has a good chance of getting the submission with only one takedown, and this should affect how the striking plays out. If Njokuani is worried about his opponent getting in on his hips, it will be difficult to get into an offensive groove.

I have to side with the more complete mixed martial artist in Gregory Rodrigues.

Hailing from China and training out of Team Alpha Male, Yadong Song is quite the athlete. At only 24-years-of-age, I think he has a bright future in this sport.

Known for his fast twitch explosiveness, Song is always looking to capitalize on openings and detach opponents from their consciousness.

His right hand is like a missile and he fires devastating kicks to the legs, body and head. I believe he will be looking for body kicks whenever Cory Sandhagen switches to southpaw.

After an unsuccessful title fight, Sandhagen aims to return to winning ways and I think this is a good opponent for him stylistically.

Sandhagen is one of the most sophisticated strikers in the UFC. Against a power puncher like Song, I expect plenty of feints and fakes, stance switches and different looks from Sandhagen.

We might see a few close rounds and I wouldn’t be surprised if Sandhagen gets rocked or dropped, but I feel that the American will pull away the longer the fight goes.

I feel that footwork, cardio, shot selection and grappling are all in favor of Cory Sandhagen, but I’m not excited about betting him at -200.